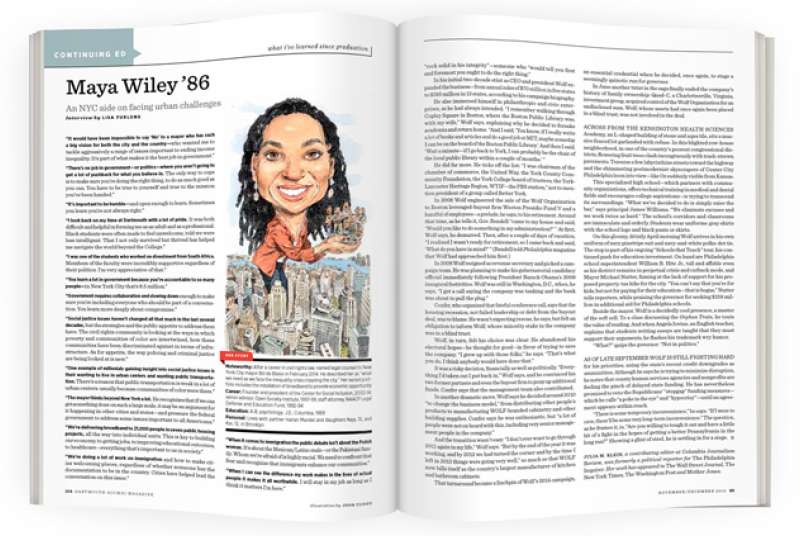 Noteworthy: After a career in civil rights law, named legal counsel to New York City mayor Bill de Blasio in February 2014. He described her as “what we need as we face the inequality crisis crippling the city.” Her varied portfolio includes the installation of broadband to provide economic opportunity

Personal: Lives with partner Harlan Mandel and daughters Naja, 15, and Kai, 12, in Brooklyn

“It would have been impossible to say ‘No’ to a mayor who has such a big vision for both the city and the country—who wanted me to tackle aggressively a range of issues important to ending income inequality. It’s part of what makes it the best job in government.”

“There’s no job in government—or politics—where you aren’t going to get a lot of pushback for what you believe in. The only way to cope is to make sure you’re doing the right thing, to do as much good as you can. You have to be true to yourself and true to the mission you’ve been handed.”

“It’s important to be humble—and open enough to learn. Sometimes you learn you’re not always right.”

“I look back on my time at Dartmouth with a lot of pride. It was both difficult and helpful in forming me as an adult and as a professional. Black students were often made to feel unwelcome, told we were less intelligent. That I not only survived but thrived has helped me navigate the world beyond the College.”

“I was one of the students who worked on divestment from South Africa. Members of the faculty were incredibly supportive regardless of their politics. I’m very appreciative of that.”

“You learn a lot in government because you’re accountable to so many people—in New York City that’s 8.5 million.”

“Government requires collaboration and slowing down enough to make sure you’re including everyone who should be part of a conversation. You learn more deeply about compromise.”

“Social justice issues haven’t changed all that much in the last several decades, but the strategies and the public appetite to address them have. The civil rights community is looking at the ways in which poverty and communities of color are intertwined, how these communities have been discriminated against in terms of infrastructure. As for appetite, the way policing and criminal justice are being looked at is new.”

“The mayor thinks beyond New York a lot. He recognizes that if we can get something done on such a large scale, it may be an argument for it happening in other cities and states—and pressure the federal government to address some issues important to all Americans.”

“We’re delivering broadband to 21,000 people in seven public housing projects, all the way into individual units. This is key to building our economy, to getting jobs, to improving educational outcomes, to healthcare—everything that’s important to us in society.”

“We’re doing a lot of work on immigration and how to make cities welcoming places, regardless of whether someone has the documentation to be in the country. Cities have helped lead the conversation on this issue.”

“When it comes to immigration the public debate isn’t about the Polish woman. It’s about the Mexican/Latino male—or the Pakistani family. Whom we’re afraid of is highly racial. We need to confront that fear and recognize that immigrants enhance our communities.”

“When I can see the difference my work makes in the lives of actual people it makes it all worthwhile. I will stay in my job as long as I think it matters I’m here.”