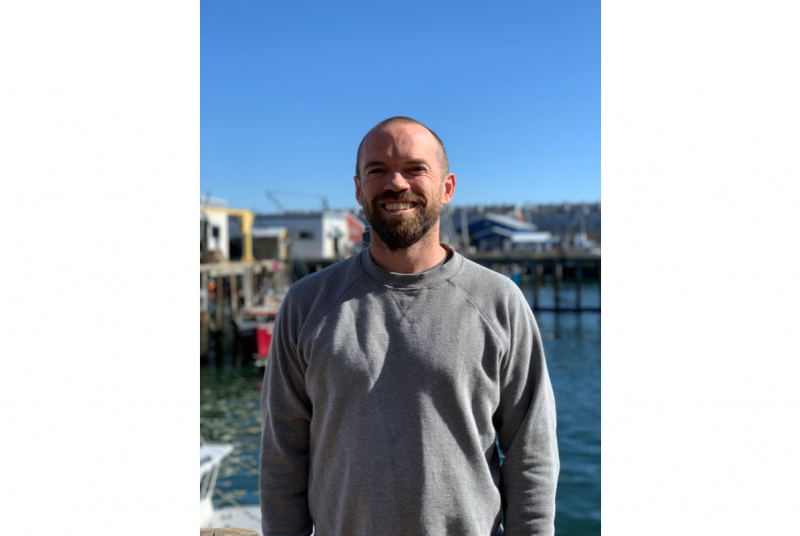 “I think the ocean is our greatest weapon against climate change,” Odlin says. (Photo courtesy Running Tide)
Voices in the Wilderness

Odlin spent his childhood on fishing boats in Maine, where he saw kelp—lots of it—along the rocky Atlantic shoreline. Now this seaweed plays a key role in his effort to minimize global warming.

After graduation, Odlin, who majored in engineering modified with studio art, worked in China and then as assistant director at the Columbia University Center for Sustainable Engineering. As the climate crisis intensified, he returned to Maine to help his family’s commercial fishing business. “The whole time, I was thinking about how I could actually scale up a carbon removal idea,” Odlin says. The microalgae he saw from boats would naturally absorb carbon and eventually sink to the ocean floor, deep enough to remove the carbon from the atmosphere. Odlin thought if he could make the natural carbon reduction processes more efficient, he could achieve carbon removal on a large scale.

In 2018 he and his wife, Justine Simon ’06, who live outside Portland, Maine, started Running Tide. Odlin and his team harvest kelp that they grow on buoys, then sink these carbon-rich biomasses deep in the sea. “Once the carbon is sunk deep enough it is effectively stored and removed from being able to harm the environment,” Odlin says.

“Carbon gets moved, on geologic time scales, into the deep earth, where it is rendered chemically inert and no longer warms the atmosphere. That process is super-slow,” says Dartmouth professor Justin Mankin, a climate research scientist who teaches in the geography and earth sciences departments. He sees potential for Running Tide to help reverse global warming. “There’s no one thing that we can do that will solve the problem,” Mankin says. “It’s going to be this constellation of solutions, mitigation efforts, and geoengineering.”