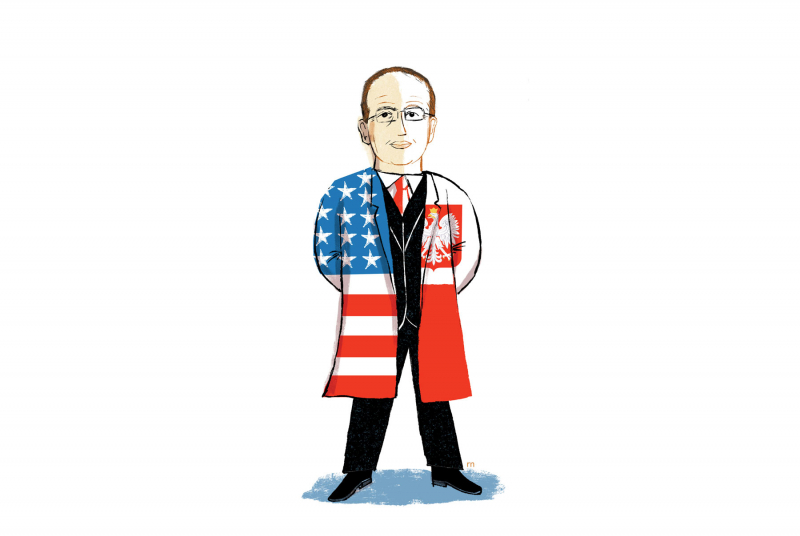 Brzezinski’s recent posting to Poland by President Joe Biden comes at a historic moment: Russia’s invasion of Ukraine and the massive flood of refugees into neighboring Poland have transformed Brzezinski’s diplomatic role. “The United States and Poland stand arm in arm at this difficult time,” he says.

The ambassador has declared Vladimir Putin “a thug” and called his actions in Ukraine “mass murder.” In March, Brzezinksi was making regular visits to the border, where hundreds of thousands of Ukrainians crossed into Poland daily. He’s impressed with Poland’s youth and their efforts to help the refugees. “These folks are running toward the fire,” he says, “not away from the fire, to help those fleeing the fire. It’s an amazing story.”

Daniel Fried, a former U.S. ambassador to Poland, keeps in regular touch with Brzezinski. “He’s a superbly qualified ambassador, and he’s the right man at the right time,” says Fried.

Brzezinski’s new job also has personal significance: His father, Zbigniew Brzezinski, who was born in Poland, was President Carter’s national security adviser from 1977 to 1981. His grandfather, Tadeusz Brzezinski, was a diplomat for the Polish foreign ministry whose career was disrupted when Germany invaded Poland in 1939. “It was something that I wanted to pick up on and continue,” his grandson says. “It’s been tremendously fulfilling.”

A government major, Brzezinski earned a law degree from the University of Virginia and a doctorate in political science from Oxford. As a Fulbright scholar in Poland, he studied the country’s constitutional tribunal. “Diplomacy is a contact sport,” says Brzezinski, a former ambassador to Sweden under President Obama. “The more people you can meet,” he says, “the better off you are.”