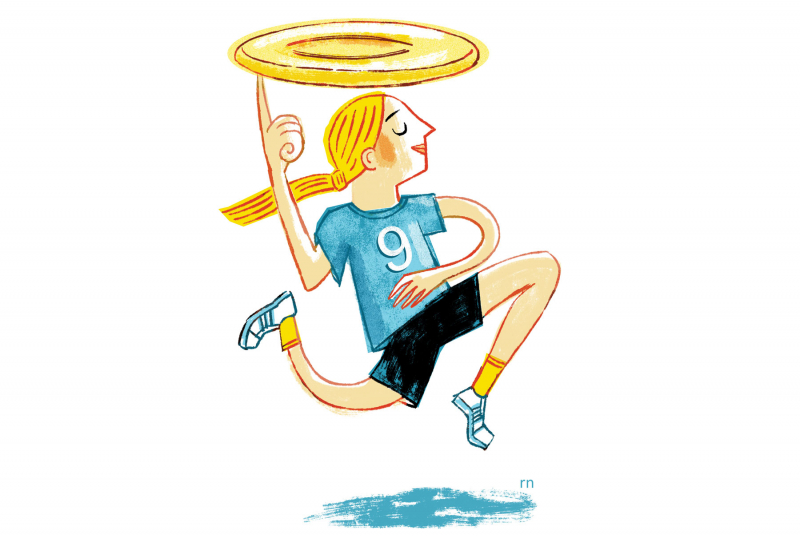 Ultiworld, Ultimate Frisbee’s dominant news source in the United States, named Austin its runner-up women’s club defensive player of 2021. “There’s a kinetic charge to her play,” it reported, “like a Tesla coil humming with electricity, flaring with bright discharges of explosive athleticism.”

Austin, who lives in San Francisco with her husband, joined the San Francisco Fury in 2015. An African and African American studies major who transferred to Dartmouth as a sophomore, Austin defines herself as a team player. “One of the things that I really love to see on the field,” she says, “is when everybody contributes to the point—everybody touches the disc.” The team won its 12th national championship last year. “It’s an intense experience,” says Austin, whose Fury teammates all work full time. “We are so lucky to be still playing competitive sports as grownups.”

Teamwork also inspires her professional life. In her private pediatric Bearfoot Occupational Therapy practice, Austin and two other therapists work with children ages 2 to 13 from the Bay Area, holding all sessions outdoors. Austin coordinates each child’s care with teachers and psychologists. “If all those people are talking together, our ability to support this child is exponentially more effective,” she says.

Rohre Titcomb ’09 introduced Austin, who had played lacrosse and soccer at Mount Holyoke, to Ultimate at Dartmouth. “I could tell she was a phenomenal athlete” from the start, says Titcomb, who was slated to coach the U.S. national Ultimate team in 2020 with Austin on the roster before Covid-19 canceled the season. Titcomb isn’t surprised that Austin has gone as far as she has in the sport: “It feeds a really great and important need that she has as a competitive person and as somebody who loves growth and learning.”