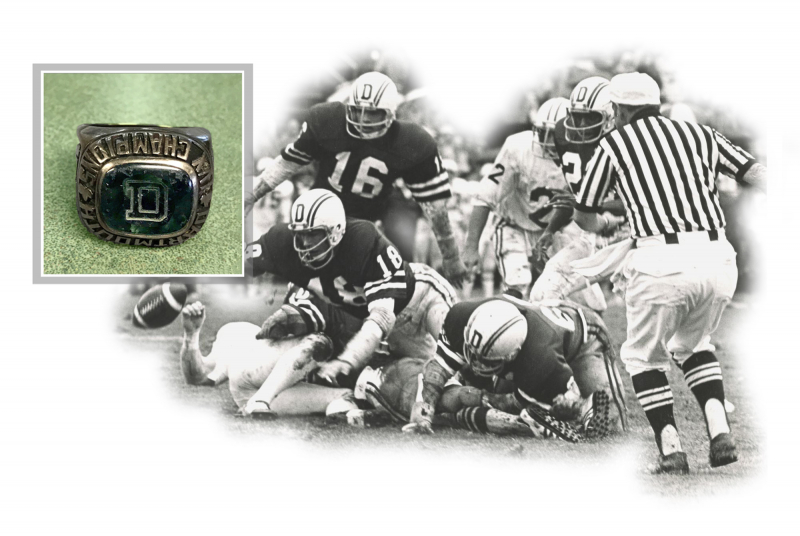 A good Samaritan embarks on a remembrance of rings past.
Polly Ingraham ’79 | July-August 2021

Arriving on the Hanover Plain in 1975, I enrolled in French 10 with professor John Lyons and started reading Proust’s A la recherche du temps perdu or Remembrance of Things Past. We didn’t make it through all seven parts of the novel—mon dieu!—but a deep plunge into Swann’s Way was enough to introduce the idea that Time is not so much a river running from Point A to Point B but more like a swirling eddy that moves forward while also churning back upon itself, over and over, generating energy.

Little did I know that, 46 years later, that famous madeleine dipped in tea would become, in a certain way, a championship football ring that needed to get back to its original owner.

It all began with an email from my classmate, and neighbor here in Concord, New Hampshire, Karen Lambrukos ’79. Without fanfare, she wrote: “Please help me reunite a Dartmouth championship ring from 1978 with the player who lost it. It is inscribed with the name ‘Harris.’ My brother found the ring in a used car that he just bought.”

Amid my in-box clutter, this message stood out for its clarity and simplicity. A classmate was asking for help, and I decided immediately that I was ready to serve the cause. Surely, this quest would provide some welcome relief from the slog I’d been engaged in—trying to land a literary agent for my book manuscript.

While the email hadn’t mentioned football, I knew instinctively that the ring must have come from that realm. (Are there lots of other Dartmouth championship rings from other sports?) I went straight to another classmate: head football coach Buddy Teevens ’79, who, in my mind is not only the current Mr. Big Green Football but also must have played in that very game alongside Mr. Harris, whoever he was.

As I composed the email to Teevens, I imagined that 1978 game. I had no memory of it. Opting not to travel to Princeton on that November weekend, I must have taken in the major victory, one that would take its proud place in Dartmouth football lore, as a distant roar. In the early stages of planning my English thesis on the women in Shakespeare’s comedies, I may have even been giving some preliminary thought to the symbolic nature of rings in those plays.

Teevens replied and gave me the first name of Mr. Harris—Ozzie, class of 1981. He also gave me a phone number and told me to go for it. “It’d be pretty special to reconnect the ring and one of our old football guys,” he wrote.

Calls from strangers generally don’t come with gifts. “Who are you, again?” Harris asked me, politely, and understandably, a few minutes into our conversation. It wasn’t as if he’d been expecting to hear about the ring, again. In fact, he wasn’t at all sure when he and his ring had parted ways. When I told him that his last name was on it (and his number, 48, but I neglected to deliver that detail until later), he was inclined to agree that it must have been his. Then he reminisced, trying to re-capture his junior-year tailback self.  “Back then, when I first got the ring, I half expected that there would be additional championship rings to follow,” he said. Suddenly, miles apart and having just met on the phone, we were talking about the sweep of time—and how our perspective on certain objects that accompany us through life may change. It felt as if the ring had propelled us into a higher sphere of meaning.

I connected Karen’s brother with Harris to return the ring. Once he had it back, Harris, curiously, returned in his mind to an era just after the one in which he'd been a member of that championship team. “It reminds me that I lived and worked in Hanover for about 30 years,” he wrote me. “As I recall, around the turn of the century, both our kids volunteered for Dartmouth Football. Our son, when he was in elementary school, was the ball boy. Our daughter, during junior high, assisted with game day statistics. ‘Dad,’ she asked after descending from the press box after one game, ‘did you play for Dartmouth?’ ‘Yes,’ I said.” She, too, was casting a line back to her father’s past.

“My destination is no longer a place, rather a new way of seeing,” Proust wrote. The more the years accumulate, the more I see my classmates doing a lot of circling back as we turn 65 and enter senior citizen land. The past swirls into the present—and on into the future.

Polly Ingraham is a School-to-Career Coordinator and a non-fiction writer who lives in New Hampshire. She blogs at pastorswifeblog.com