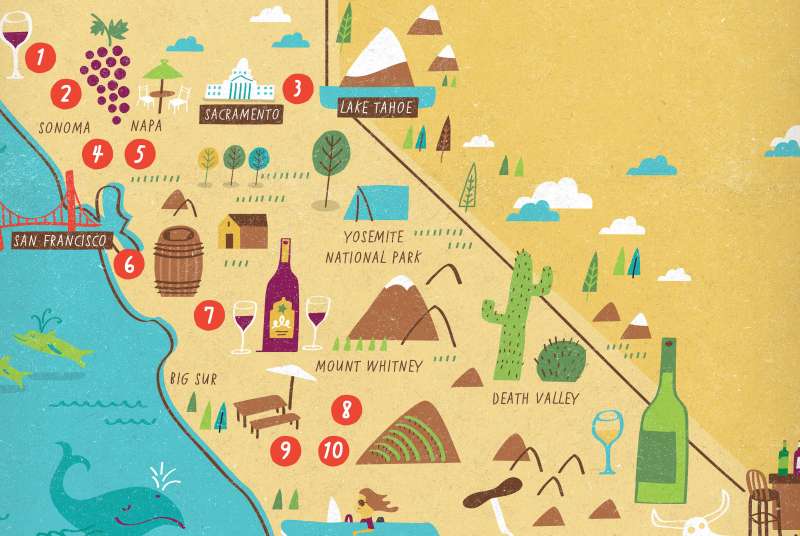 Reds, whites and green: a quick guide to some alumni vintners in the Central and Sacramento valleys of California, where in vino veritas is more than just a motto.
Jessica Fedin ’17 | Jul - Aug 2017

When Peay left brand consulting in 2003 to team up with his brother after buying land on a ridge overlooking the Pacific, many people doubted that grapes would ripen in the cold locale. No worries. Although it’s difficult to plant in their location, Peay, who worked in retail and harvested grapes to prepare for his new career, says his vineyard “produces wines with good acid, less fruit and alcohol, and more secondary aromatics of earth, tea, and spice, imprinting our wine with a distinct profile and coaxing out that unique personality.”

Focused on Bordeaux varietals with what he describes as “good natural acidity” and “moderate alcohol levels,” Jeffrey turned to winemaking after a career with Seagram’s in New York City. “My Dartmouth friends tend to think I have retired out here, but I actually work harder than ever,” he says. Many people don’t realize how “very competitive” the wine industry can be, he adds, but the stresses of raising capital and running a business is offset by “working outdoors and being involved in every process, from planting our own vineyard to making our wine.”

Acquired in 2000 by Grace’s father, this winery with views of the snowcapped Sierra Nevada Mountain Range is a family enterprise—something especially appreciated in crush season, when the breakneck pace “paralyzes you,” says Grace. An earth sciences major, he realized that working in remote areas of Nevada as a field geologist studying drill-core samples was not his calling, but as a winemaker with an advanced viticulture degree, he still finds his science background helpful.

Belden never imagined juggling entrepreneurship, writing and motherhood, but Dartmouth “instilled a strong belief that you really can do anything you set your mind to,” she says. An English major, she loves the storytelling aspect of brand development—and “walking through 50 acres of gorgeous Sonoma landscape with neither a person nor vehicle in sight.” She is a tenacious marketer, too: “You have to push past the nagging belief that [buyers and sommeliers] are just not that into you,” she says.

An environmental and evolutionary biology major, CEO Ruel was drawn to winemaking by his scientific interest in how plants interact with their environments as well as by an Italian LSA to Siena, where he conducted an independent study on the wines of Chianti. “There is so much science in what we do here, yet we produce something so tangible and delicious, which requires understanding how the grapevines interact with the soils and the constantly changing weather,” he says.

Rodgers’ technology-driven approach has yielded elegant and earthy Pinot Noirs that appeal to Burgundy lovers. Of his three vineyards, he recommends visiting Domaine Lois Louise, nestled in the Santa Cruz Mountains, and stopping at his Half Moon Bay Wine & Cheese Co. tasting bar and store. Clos de la Tech also has tastings. The CEO of Cypress Semiconductor has designed his own tractor (for use on the 25-degree side slope at Domaine Lois Louise), an entirely gravity-flow-based and temperature-controlled process from tank to barrel to bottle, and a patented steel wine press that squeezes the grapes more gently.

Khanna, a former Intel lawyer, says he has found it rewarding to rehabilitate this century-old winery. He has expanded the vineyard in nontraditional ways: New soccer and cricket fields have hosted close to 1,000 youth soccer games in recent years. All 35 acres are equipped with drip-irrigation systems and there’s a new venue for weddings and corporate gatherings. He still uses his legal training, he says, to deal with frustrating government regulations but takes pride in the fame achieved by his dessert wine, Vino de Mocca, which is “infused with orange-chocolate and coffee flavors” to delight sweet tooths.

Gleason says the most rewarding aspects of his lifestyle are “great quiet moments when I am out in the vineyard.” He and wife Jackie “may be knee deep in mud or elbow deep in grape must,” but sharing the fruits of their labor with customers makes it worthwhile. “Seeing the light in someone’s eyes when they taste our wine makes it all magic,” he says. In addition to SCJS Vineyard (named with their kids’ initials), Jackie’s Vineyard surrounds their home and produces Bordeaux varietals.

An engineering major and Italian minor—an asset while working at Tuscan vineyard Antinori—winemaker Fiorentini credits an LSA in Italy and her love of pushing the boundaries of science for her embrace of viticulture. A chance phone conversation in 2010 led to her fortuitous partnership with Bill and Liz Armstrong, who own Epoch Estate. Its location provides a high concentration of limestone soil that affords Fiorentini the artistic license to craft site-specific wines that have earned praise from critical palates, she says.

Gleason—Steve’s brother— tended bar at the Hanover Inn as a student, and then sold and marketed semiconductors in Silicon Valley before realizing that what he enjoyed most about that world was choosing wines at business dinners. From the label artwork, courtesy of Daniele Genadry ’02, to his wine being available at the inn’s restaurant, Pine, Gleason’s collaboration with celebrated viticulturist Neil Roberts has a strong Dartmouth connection. Their wine is harvested at a lower sugar level than usual in the area, allowing for a lower alcohol content that shows off the quality of the local fruit.

Inspired by a Dartmouth education that promoted “free-thinking” and “not following the crowd,” he says, Baily left actuarial consulting at age 41 to move from Los Angeles to wine country. He and his wife, Carol, planted a small, backyard vineyard and started to create their own medleys. They took winemaking and viticulture courses before launching their winery 30 years ago with a loan from Farm Credit and have since added an eatery, Baily’s Old Town Temecula. “I still make the wine and Carol runs the restaurant,” says Phil.