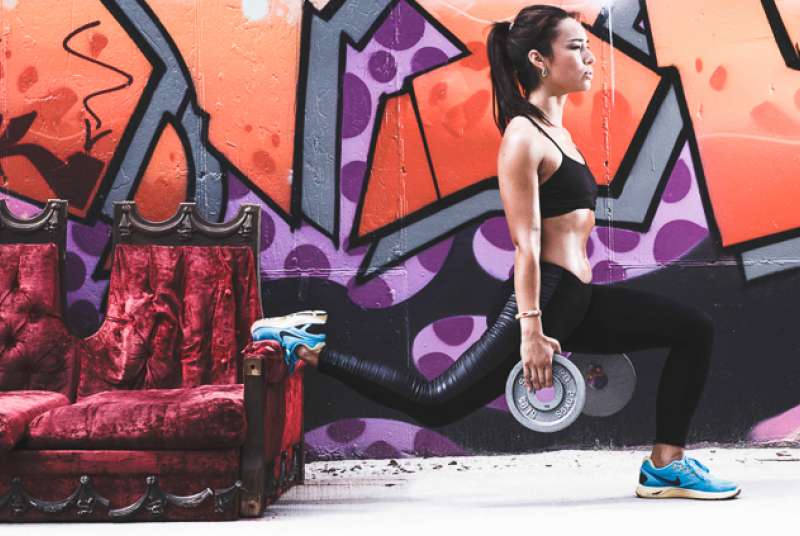 Journalist Chelsey Luger ’10, who has roots in the Turtle Mountain Chippewa Tribe and Standing Rock Lakota Nation, is on a mission to promote health and fitness among Native American communities.
INTERVIEW BY JAMES NAPOLI | Jan - Feb 2016

Describe your website, Well for Culture.
It’s a resource that people can go to on a daily basis to learn fitness tips, new workouts and recipes. I write a “Well for Culture” column for Indian Country Today Media Network that is cross-published on our site. Beyond the website, we’ve been hired to do workshops and presentations in both tribal communities and non-Native spaces like Nike World Headquarters. We want to do more face-to-face work, which is more impactful than if someone simply sees one of our Facebook or Instagram posts. We’re also partnering with language revitalization activists from all over Native Country to translate wellness-related words into indigenous languages. It’s part of a campaign to promote both fitness and language.

What makes your work specific to indigenous culture?
It’s a more holistic approach, which is how our ancestors used to look at it. You had to be fit and healthy in order to survive, get food and contribute to the community. There’s a stereotype today that there’s so much alcoholism, diabetes and drug abuse among our people. We’re reminding our youth that that’s not who we are and that those things have only come from colonization.

How did you get started?
Thosh Collins, a photographer on the board of the Native Wellness Institute, contacted me when he was doing a photo shoot of Native people who are into fitness. We became friends and started discussing the innovative knowledge that comes from our heritage that’s largely been forgotten. We decided we needed to connect Native people who are looking to our traditions to get back into wellness. We’re currently not incorporated and don’t have nonprofit status. Everything that we produce comes out of our own pocket or from the money that we make doing consultations and presentations.

What do you present at your workshops?
If we’re working with a group of youth, we’ll teach them games and exercises to get them moving, and we like to ask a lot of questions about Native American food and lifestyles. We offer tips on how to improve health and fitness and we share concepts like Mother Earth Gym and Ancestral Diet. We love showing historical photos of Native people who are super active and healthy. The Native kids are always surprised to see these. They’re used to seeing people who are really out of shape. We’re adamant about making wellness look cool for Native kids.

What is Mother Earth Gym?
Going outdoors to work out. The more you can get out, the happier you’ll be. There’s a lot of science behind that, of course, but we’re just encouraging people to get outside and to be on the land. You don’t need to spend a bunch of money or have access to fancy equipment. In a lot of Native communities, we may not have access to the best amenities, but we have our connection to the land. It’s not just a Native thing, either. No matter what culture you come from, you would do well to get outside and use a Mother Earth Gym as opposed to going to Planet Fitness.

What are some specific examples of Mother Earth Gym workout routines?
You could go for a hike or a run in the mountains or the forest. You could use a heavy rock or a log as a weight for squats and lunges. You could find a ledge or a stump to do box jumps and step-ups. It’s endless.

And Ancestral Diet?
Ancestral Diet is based in indigenous foods from North and South America. Our pre-European contact diets were very healthy compared to the white flours and sugars that were introduced with government rations about 200 years ago. There are hundreds of indigenous foods that are still available today—buffalo meat, salmon, walleye, beans and white corn—just not to the degree that they used to be. Spending time with food and recognizing its spiritual significance used to be a huge part of our culture, and it’s a practice that we’re trying to revitalize.

What sort of dietary information do you offer?
We have recipes on our website and we’re teaching people how to hybridize the traditional diet into a more contemporary context. We’ve drawn inspiration from clean eating and other healthy food movements, and we’re combining that with knowledge of ancestral foods to help people start to eat healthier. For example, we always tell people that coconut oil is the healthiest oil to cook with. Obviously, Lakota Natives in the Northern Plains weren’t traditionally cooking with coconut oil, but if you’re going to make a buffalo burger today, use coconut oil.

You also write in Indian Country Today about how promoting personal fitness in Native communities is a very political project. Could you speak to that further?
One thing we emphasize is that wellness is empowering. When you live your life alcohol- and drug-free, focused on positive things, contributing to your community and your family, that goes against the negative stereotypes that have become prevalent about our communities. There is still a lot of discrimination, especially in areas where there’s a large Native population. Even in areas where people don’t know Natives at all, like in big cities, we’re seen as a relic of the past. Living healthy and positive lifestyles is making a political statement: I’m not who you expect me to be. I’m not this downtrodden Indian with a dying culture. I’m alive and well, succeeding and happy.

This interview has been edited for clarity and length. Photo courtesy Thosh Collins