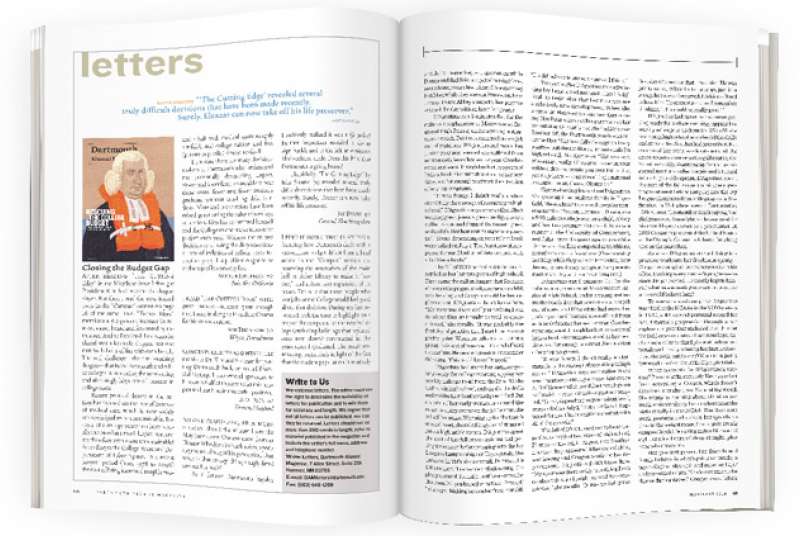 Closing the Budget Gap After reading “The Cutting Edge” in the May/June issue I thought President Kim had become the dragon slayer. But then I read the note tucked away in the “Campus” section on page 16 of the same issue. “Tuition Rises” mentions a 5.9-percent increase in tuition, room, board and fees voted by the trustees. And so I realized the dragon he slayed was a komodo dragon, not one that hurls bolts of fire with each breath. The real challenge—the fire-breathing dragon—that faces Dartmouth and other colleges is stemming the unrelenting and alarmingly high rate of increase in college costs. Recent political debate in the nation has focused on the rate of increase of medical care, which is now widely acknowledged to be unsustainable. But costs of a college education have actually increased at a much higher rate, and are therefore even more unsustainable! According to the College Board and Department of Labor figures, in a recent 30-year period (from 1978 to 2008) the cost of living increased roughly two-and-a-half-fold, medical costs roughly six-fold, and college tuition and fees (private or public) almost 10-fold! I am sure there are many decision-makers at Dartmouth who understand the potentially devastating impact. Fewer and fewer families are able to bear these costs; fewer and fewer students graduate without crushing debt burdens. More and more voices have been raised questioning the value of a college education. Kim has committed himself and the College to one major innovative project each year. Witness the trustee decision continuing the disproportional rate of inflation of college costs for another year; this problem ought to be at the top of his priority list.

I read “The Cutting Edge” with great interest—interest great enough that I sent it along to President Obama for his consideration.

Congratulations and heartfelt thanks to Dr. Kim and his team for putting Dartmouth back on sound financial footing. I also extend apologies to him on behalf of those who let this happen and put him in this awful position.

No one could have been more surprised than I the minute I saw the May/June cover: Our esteemed founder Eleazar Wheelock in black robes, sporting the usual wig of his generation…but what is that orange thing snugly fitted around his neck? As a former Dartmouth kayaker I suddenly realized it was a life jacket! Further inspection revealed a dollar sign buckle and to the left an ominous black-colored circle. Does this hint that Dartmouth is going broke? Thankfully, “The Cutting Edge” by Julie Sloane ’99 revealed several truly difficult decisions that have been made recently. Surely, Eleazar can now take off his life preserver.

I find it ironic that in an issue featuring how Dartmouth dealt with a $10-million budget deficit I see a brief article in the “Campus” section announcing the renovation of the main hall at Baker Library to make it “cozier,” and subsequent expansion of its hours. I’m sure that those people who lost jobs at the College would feel good about that decision. During my last reunion I took the time to highlight on a map of the campus all of the new buildings (excluding buildings that replaced ones torn down) constructed in the years since I graduated. The result was amazing, particularly in light of the fact that the student population is relatively unchanged over that same period. No wonder Dartmouth needs our money. I find my giving is done with a lot less enthusiasm these days.

Days of Discrimination The story about Raymond  Johnson ’59 and Delta Upsilon [“A House United,” May/June] was probably typical of a number of fraternity discrimination stories of that transitional period. Tau Epsilon Phi (TEP) came to the Dartmouth campus in 1949 when a number of Christian and Jewish students saw the need for a fraternity where no one would be denied because of religion. I have always assumed that in the late 1940s Dartmouth started admitting a greater number of Jewish students than Pi Lambda Phi and the few houses that had no clause could handle. The students naively chose a southern Jewish fraternity that, being “Jewish,” should have been open to all. What they did not know was that this southern fraternity would, of course, have a clause barring blacks. My pledge class included three of the six blacks in the class of 1953. When the TEP executive secretary visited campus, he said, “They must go.” No one would agree to this, and the final deal that was struck was that they would be members of only the chapter. Sad to say, everyone accepted, which I’m sure would not have been the case just a few years later when TEP and a number of other nationals were simply thrown off campus.

In 1954-55 I was president of Sigma Phi Epsilon, one of the six fraternities to which “A House United” referred. Sigma Phi Epsilon had a very narrow discriminatory clause. The person we were pledging was Jewish. We had to struggle with the decision whether to remain in the national or go local. We decided to stay in the national in order to have the discriminatory clause removed. It took a couple of years, but the clause was removed altogether.

At Phi Sig the fight was not over pledging a particular student but rather as a protest against a national “gentlemen’s agreement” not to pledge blacks, of which we were unaware when we joined the fraternity. When we celebrated our 50th anniversary as a chapter we were visited by the national president. In conversations about our concerns we discovered that racism at the top of the fraternity included anti-Semitism (our visitor seemed unaware that the chapter already included many Jewish members). The chapter voted to end our ties with Phi Sig in the spring of 1956, meriting a headline in The D and a small article in The New York Times. These were the first stirrings of consciousness about discrimination that had been largely invisible. I’m proud that Phi Tau went on to become one of the first fraternities to accept female members and later to explicitly reject discrimination on the basis of sexual orientation. In some ways we’ve really made progress since the 1950s.

As one of the class of 1959  Delta Upsilon pledges, I am moved to say that Michael Lasser’s article brings back strong memories of our finest hour. It is one reason our group has turned out so strongly at reunions.

Great Leap Forward Judith Hertog’s article  “Speak ing to the Future” [May/June] struck a responsive chord with me as I struggled with the Chinese language in graduate school and thereafter. I was the first (and for many, many years the last) Dartmouth exchange student to China. In the middle of the revolution, 1948-49, I spent my junior year in Guangzhou at Lingnan University. At Dartmouth then, there were no Asian languages taught, and only a few courses on Chinese philosophy and Buddhism under the eminent scholar Wing-tsit Chan. Studying in China was a seminal experience, leading me to my present role as a distinguished professor at Georgetown’s School of Foreign Service after many other earlier Asian-related incarnations.

The Good Fight I commend you for featuring Mary Anne Mendenhall ’02 in “On the Job” [May/June]. The work she is doing [as a public defender of parents charged with child abuse] in the South Bronx is very challenging, not alone by reason of the tragic situations in which marginalized families find themselves but also because of the elitist/racist mentality imbedded in the child welfare system. I have worked in the parental public defense field for the last 20 years of my practice, and my personal experience is very much like Mendenhall’s. In the rural, depressed western Washington county where I practice, the poor, the Native Americans and the mostly Mexican immigrants dominate the dependency (child welfare) court dockets. Even though the overarching priority of the legal process is declared to be “reunification,” parent advocates are routinely confronted with the pervasive attitude throughout the system that the foster home is a better placement than the struggling family home. Thank you, Ms. Mendenhall, for being a “foot soldier in the fight for social justice.”

Right Stuff When I got home today and found my May/June DAM waiting for me, I took a moment to page quickly through it. Starting from the back, as usual, I immediately stopped on the profile of Karen Lewis ’74. “Now that’s an alum who makes me proud to share a small part of our heritage!” I thought. I found her perspective truly refreshing.

As I skimmed further toward the front of the magazine I found I had too few fingers for marking pages to return to later, when I hoped to have more time to read in depth. Then the pleasure of reaching the “Letters” section at the front and spotting the comment from Christopher Schons ’88: “Wow! Maybe my alma mater is more interesting than I had thought.” Hear, hear—and thank you very much.

Teachable Moments Karen (Jennings) Lewis ’74 [“Continuing Ed,” May/June] claims “children who are the hardest to educate are getting kicked out of charters at test time.” This accusation that charter schools inflate their test scores is patently untrue. For example, the Knowledge is Power Program (KIPP, the nation’s largest charter school network) has 4,600 students in Houston, where my son teaches, from which they expelled only one student last year for cause. Furthermore, KIPP Houston’s student attrition last year for all reasons (moved away, chose to leave and expelled) was 9 percent, lower than most surrounding schools. Out of thousands of hopefuls, only a few minority children can be accepted into charter schools. This is not because of money. The best-run charter school networks, such as KIPP, cost taxpayers less per pupil even though they do a far better job than traditional schools in closing the achievement gap, graduating students and sending them to college. Rather, the problem lies with the political clout of teachers unions, such as the one led by Lewis. They block new charter schools while rigidly adhering to pay and job tenure based on seniority rather than ability (last in, first out).

Generation Now The survey results in the Mar/Apr edition of DAM [“The Millennial Mindset”] left me with an impression that surprised me—and two questions.

The impression is that there was a surprising level of uniformity in the responses to questions from what I presumed was a diverse group. The questions arise from reading the student quotations [“Big Pictures”]: Are we admitting potential leaders or loners, and will this generation of students have the same loyalty to Dartmouth as its forebears?