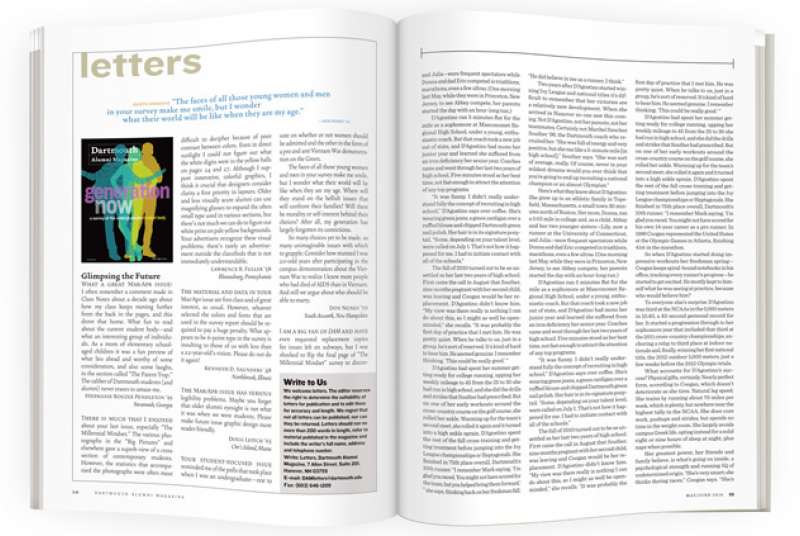 Glimpsing the Future What a great Mar/Apr issue! I often remember a comment made in Class Notes about a decade ago about how my class keeps moving further from the back in the pages, and this drove that home. What fun to read about the current student body—and what an interesting group of individuals. As a mom of elementary school-aged children it was a fun preview of what lies ahead and worthy of some consideration, and also some laughs, in the section called “The Parent Trap.” The caliber of Dartmouth students (and alumni) never ceases to amaze me.

There is much that I enjoyed about your last issue, especially “The Millennial Mindset.” The various photographs in the “Big Pictures” and elsewhere gave a superb view of a cross section of contemporary students. However, the statistics that accompanied the photographs were often most difficult to decipher because of poor contrast between colors. Even in direct sunlight I could not figure out what the white digits were in the yellow balls on pages 24 and 27. Although I support innovative, colorful graphics, I think it crucial that designers consider clarity a first priority in layouts. Older and less visually acute alumni can use magnifying glasses to expand the often small type used in various sections, but there’s not much we can do to figure out white print on pale yellow backgrounds. Your advertisers recognize these visual problems; there’s rarely an advertisement outside the classifieds that is not immediately understandable.

The material and data in your Mar/Apr issue are first class and of great interest, as usual. However, whoever selected the colors and fonts that are used in the survey report should be required to pay a huge penalty. What appears to be 6-point type in the survey is insulting to those of us with less than a 22-year-old’s vision. Please do not do it again!

The Mar/Apr issue has serious legibility problems. Maybe you forget that older alumni eyesight is not what it was when we were students. Please make future issue graphic design more reader friendly.

Your student-focused issue reminded me of the polls that took place when I was an undergraduate—one to vote on whether or not women should be admitted and the other in the form of a pro and anti Vietnam War demonstration on the Green. The faces of all those young women and men in your survey make me smile, but I wonder what their world will be like when they are my age. Where will they stand on the hellish issues that will confront their families? Will there be morality or self-interest behind their choices? After all, my generation has largely forgotten its convictions. So many choices yet to be made, so many unimaginable issues with which to grapple: Consider how stunned I was 20-odd years after participating in the campus demonstration about the Vietnam War to realize I knew more people who had died of AIDS than in Vietnam. And still we argue about who should be able to marry.

I am a big fan of DAM and have even requested replacement copies for issues left on subways, but I was shocked to flip the final page of “The Millennial Mindset” survey to discover I had already reached the “Alumni News” section. I bet a majority of alums were disappointed. We are accustomed to a fair number of substantive articles and not an overabundance of duplicative, blown-up photographs, quotes, statistics and blank spaces. I am hoping that future issues return to a normal format.

Happiness Is Relative Quarreling with Paul Christesen’s piece about the importance of the humanities, Ted Tapper ’61, DMS’62 [“Letters,” Mar/Apr], avers that some aspects of our lives are predetermined by genetics and suggests that people with Down syndrome and their families are fated to lives of unhappiness. As the mother of two adult children, one with Down syndrome, I’m very comfortable saying that my family isn’t suffering. My daughter has a job, a committed relationship, a gym membership, a blog, a Facebook account and a big crowd of friends. Her brother, Dartmouth ’07, doesn’t do too badly either. Nor does my husband, Dartmouth ’74. Perhaps Dr. Tapper isn’t aware that the lives of people with Down syndrome and their families have improved dramatically during the last few generations, helped along by advances in education and medicine. Increasingly these folks are leading lives that are longer, healthier, more productive and, yes, happier, than ever before. Perhaps he also hasn’t noticed that people with Down syndrome see their lives as normal and therefore entirely satisfactory. They don’t share our society’s condescension toward those who are recognizably different.

In Good Company The Sept/Oct 2010 issue of DAM featured a socialist professor at Berkeley who fought as a guerilla for the African National Congress in apartheid South Africa, and the Nov/Dec 2010 featured an ex-CIA analyst and professor at Georgetown who vehemently opposed the invasion of Iraq and now urges the United States to wind down the war in Afghanistan. Wow! Maybe my alma mater is more interesting than I had thought.

The Mitsui Connection Takanaga Mitsui, father of Takanobu Mitusi ’43 [“Day of Infamy,” Nov/Dec 2010], was a Dartmouth classmate of my father. Somewhere I have the class of 1915 photograph of the two of them. In 1959 I met Takanobu in Japan. I was studying Japanese and eventually served there in the U.S. Foreign Service for a total of 13 years. Dad’s classmate was then the president of the Dartmouth Club of Tokyo. His younger son, Mamoru, was a member of the class of 1958. A number of Mitsui & Co. employees have attended Dartmouth during the past 50 years, and there is usually a Mitsui student at Tuck. A tradition started 95 years ago continues.

Hot About Geithner My critics Louis Hall ’83 and Mark Sternman ’90 [“Letters,” Jan/Feb] rightly point out that Treasury Secretary Tim Geithner ’83 did not formally work for any of the Wall Street giants—a mere technicality. He was intimate with Wall Street as head of the Federal Reserve Bank of New York and has been described as having a supporting role to Hank Paulson ’69 in the AIG bailout. He has also been cited as a protégé of the likes of Larry Summers and Robert Rubin. He worked for the firm of Henry Kissinger. He played a role in the recent financial crisis. I rest my case.