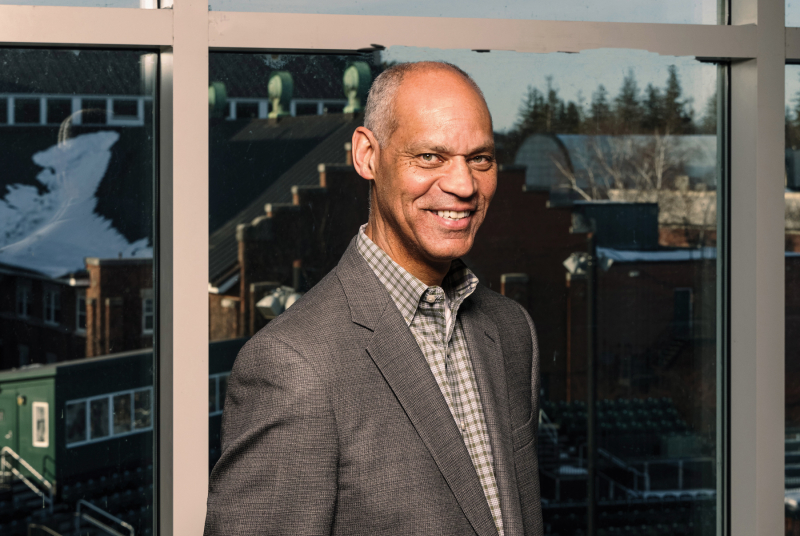 Peter Roby has an impressive resume: head basketball coach at Harvard, VP of marketing at Reebok, and athletics director at Northeastern. Lured out of retirement by President Phil Hanlon ’77, Roby has a new job with plenty of built-in challenges. The pandemic has devastated student-athletes, and the Title IX mess created by cutting and restoring five sports teams (see page 16) requires a major cleanup. A government major with a master’s in leadership, Roby spoke to DAM three weeks after his mid-February appointment.

Because of teams being cut and reinstated, you’re starting in a deficit position.
Yeah. The circumstances of my arrival are unfortunate. As an alum, I’m really sad about it. But I’m also excited to be back, humbled to be seen as someone who could help the College move forward and start the healing process, which is something I think I’m equipped to do. We’ve got a lot of work to do, but I think it’s work I’m capable of doing. It’s a big lift, but we have lots of passionate people.

What have you told athletes on those five teams?
I’ve had Zoom meetings with the teams and I’ve tried to apologize for what they’ve had to endure. I’ve been saddened, and now I’m really hopeful for them to continue what they hoped to do when they decided to attend Dartmouth. I’m excited to make them feel valued and welcomed and to help start rebuilding their trust. I don’t expect that to come in the short term. I don’t want them to judge me or trust me based on what I say. I want them to watch and see what I do.

Why should any good high school swimmer even consider Dartmouth now?
Because it’s one of the best schools in the world in one of the most bucolic locations in the country, with a deep history of achievement. People who come out of Dartmouth change the world, and there’s no better experiential learning than athletics here. You’re going to make lifelong friends, you’re going to compete at a really high level, and you’re going to get a fabulous education.

Is there any guarantee that the reinstated teams won’t be dropped again?
I don’t think there are any guarantees about anything in life. You put your head down and you do the best you can. I’ve told the teams that have been reinstated, “Let’s make this memorable.” If we do, there’ll be no reason for anybody to consider cutting the teams.

Some student athletes who’ve lost seasons because of the pandemic have complained about a lack of empathy for their situation.
Yes, and I want them to know that we’re hurting for them. It’s brutal. I wish there was something we could do to make it all go away and start over. But we can’t, and it’s a lesson that we’ve got to benefit from. We need to put these things in perspective of all the losses—the loss of life, of income, of a job, of businesses. It’s been awful—the people who have died with no family around to comfort them, the families that have felt such loss and emptiness. I hope I can help people put everything in perspective in a constructive way.

Have you spoken with former athletics director Harry Sheehy?
I have not. I want to be respectful during this time of transition. He worked hard while he was here, and there are many things he achieved. I don’t want that to go unappreciated.

Could you be a candidate for the AD job beyond June 2022, when your appointment ends?
I don’t think there’s any value in me thinking about that yet. The official title is interim, but make no mistake, I’m the athletics director. My focus is on the folks who are here and the work that has to get done. I want to help shape the future of Dartmouth College athletics. I’m not here simply to keep the seat warm. I’m here to do all I can for those who are involved in athletics now and for those who will come after I’m gone.

What’s your outlook for September, when the College might return to some version of normal?
I think we should feel optimistic that we’ll get back to the kind of iconic fall we have learned to love here. People back on campus, celebrating team success, seeing old friends, and supporting the College. That’s what I’m hoping for.