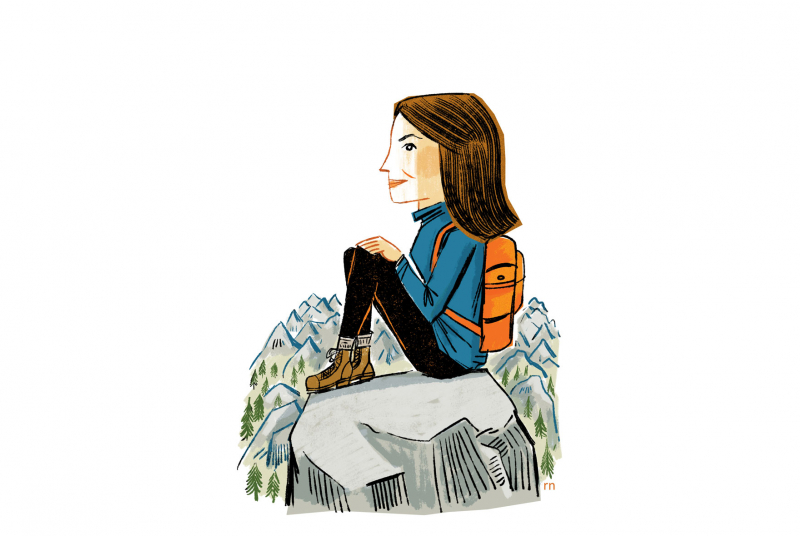 When the pandemic hit, Dowling sought A way to battle cabin fever. After a friend mentioned the “NH 48,” New Hampshire’s 4,000-foot mountains, she developed a new goal. “At first I thought I’d do them across many years,” says Dowling, a consultant and mother of four daughters who lives in Maine with her husband, Tony Dowling ’90. Then she recalculated. “If I climbed four a month, I could finish all 48 in a year.”

A native of Iowa’s flatlands, Dowling had summited Moosilauke in 1986 on a first-year trip—more than 30 years ago. On September 12, 2021, she reached her first summit, Mount Pierce in the Presidential Range. During the next 11 months, Dowling kept at it. “Climbing became addictive,” she says. There were ethereal mists, lichen-etched rocks, and the crunch of fresh snow. She also faced some harrowing moments. Near the top of South Carter on one of her earliest hikes, with just a few hours of daylight to descend, Dowling injured her knee. She and her hiking partner finished slowly, in the pitch dark, with one headlamp. “That was a wake-up moment,” says Dowling. She now makes an equipment checklist before every climb.

The Facebook group “Hiking Buddies NH 48” led to new friends, including Stacy Albach, a nurse from Vermont. Together they hiked 24 mountains. Albach grew to trust Dowling’s judgment, especially after they conquered the infamously steep and challenging Blueberry Ledge Trail on Mount Whiteface. “I probably would never have done it without her,” Albach says. “She talked me through it.”

Moosilauke was Dowling’s 48th mountain. On August 27, less than a year after her first climb, she stepped up to the 4,802-foot marker on its rocky summit and celebrated with friends, including her freshman-year roommate, Shannon Clark ’90. “I was looking for a goal and gained so much more,” says Dowling.