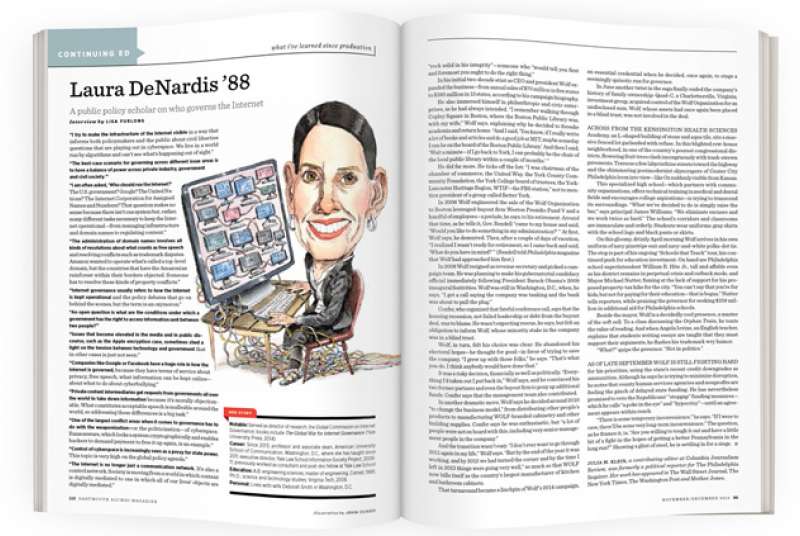 “I try to make the infrastructure of the Internet visible in a way that informs both policymakers and the public about civil liberties questions that are playing out in cyberspace. We live in a world run by algorithms and can’t see what’s happening out of sight.”

“The best-case scenario for governing across different issue areas is to have a balance of power across private industry, government and civil society.”

“I am often asked, ‘Who should run the Internet?’ The U.S. government? Google? The United Nations? The Internet Corporation for Assigned Names and Numbers? That question makes no sense because there isn’t one system but, rather, many different tasks necessary to keep the Internet operational—from managing infrastructure and domain names to regulating content.”

“The administration of domain names involves all kinds of resolutions about what counts as free speech and resolving conflicts such as trademark disputes. Amazon wanted to operate what’s called a top-level domain, but the countries that have the Amazonian rainforest within their borders objected. Someone has to resolve these kinds of property conflicts.”

“Internet governance usually refers to how the Internet is kept operational and the policy debates that go on behind the scenes, but the term is an oxymoron.”

“An open question is what are the conditions under which a government has the right to access information sent between two people?”

“Issues that become elevated in the media and in public discourse, such as the Apple encryption case, sometimes shed a light on the tension between technology and government that in other cases is just not seen.”

“Companies like Google or Facebook have a huge role in how the Internet is governed, because they have terms of service about privacy, free speech, what information can be kept online—about what to do about cyberbullying.”

“Private content intermediaries get requests from governments all over the world to take down information because it’s morally objectionable. What constitutes acceptable speech is malleable around the world, so addressing these differences is a big task.”

“One of the largest conflict areas when it comes to governance has to do with the weaponization—or the politicization—of cyberspace. Ransomware, which locks a system cryptographically and enables hackers to demand payment to free it up again, is an example.”

“Control of cyberspace is increasingly seen as a proxy for state power. This topic is very high on the global policy agenda.”