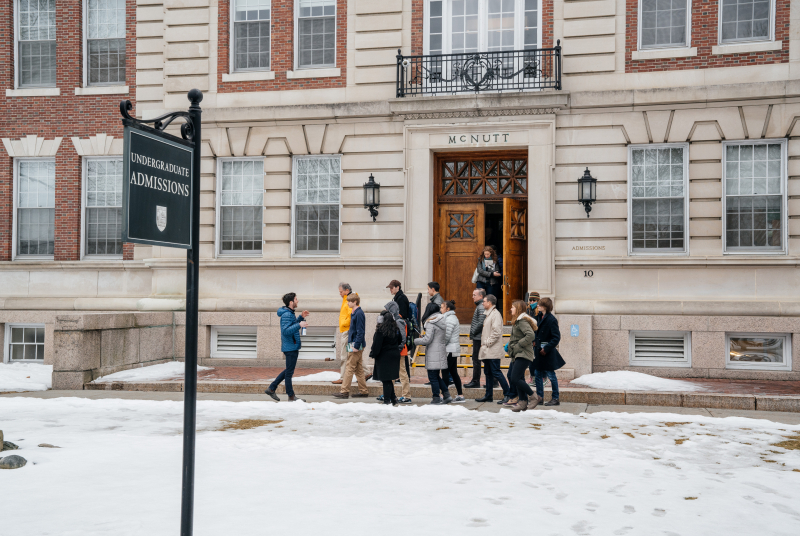 The Kids Are All Right

An admissions ambassador is humbled by prospective students and their very modern stories.
Jonathan Agronsky ’68 | Nov-Dec 2019

The young woman greeted me with a smile and a handshake, then sat across from me in the reading room of our local library. She was applying to Dartmouth. It was my job as an admissions ambassador to interview her and prepare a written report. In 2018, admissions staff could interview only a fraction of the record-breaking 23,641 applicants vying for a spot in the 1,150-member class of 2023. That’s where ambassadors come in.

To win my endorsement, this local high school senior had another bar to clear: my skepticism about Generation Z. From the perspective of an aging boomer, they seem narcissistic, oblivious to the world outside their smart phones and social media. It strikes me as a miracle that these youngsters don’t get run over crossing the street yakking on their phones. But the poised young woman sitting across from me had no smartphone. Nor did she appear shallow or vain. In fact, she was about to radically disabuse me of my misconceptions about her and her peers.

She began by offering me a glimpse into the mysteries of “dark matter,” an Einstein-level conundrum that has yet to be cracked. “We know it exists, but we don’t know what it is,” this Dartmouth candidate explained to a man who is clueless about and indifferent to the vast unsolved riddles of space and time. At least until she began to discuss her senior independent study project: to investigate the theoretical equations of a leading astrophysicist for “calculating the density of dark matter,” she said, in our solar system.

I gave this budding astrophysicist the highest possible recommendation. I did the same for only one other candidate, a young man who won me over with his unusual story. He had grown up on military bases and lived in what he called a “sheltered and homogenous” world. When his Army officer father retired and moved his family, the prospective student found himself in a new school surrounded by 2,500 strangers. Some seemed determined to challenge him. At first this rattled him. When he tried out for the cross-country team, his new teammates teased him because he refused to run bare-chested through residential neighborhoods, as the rest of the team did. He said stripping down to his shorts would be “disrespectful” to residents. His teammates called him a prude. Eventually the boys came to respect him because he stood by his beliefs and ignored their macho taunts. Once he was sure he had made his point, he surprised them one day by running without a shirt.

He became good friends with some of those boys, and they elected him captain the following year. He never changed. What changed was his schoolmates’ perception of him.

With each successive interview—I have done nine so far—my regard for this generation rose. Gen Z students seemed every bit as idealistic as my generation and equally skeptical of the national status quo. One generational difference I found unsettling was how much more programmed Gen Z seems compared to the 18-year-olds of my day. These kids start building their scholastic resumes in middle school or earlier. Their schedules are so packed with activities I half-jokingly asked one candidate: “When do you find time just to be a kid?”

On the positive side, the young people I interviewed seemed far more likely to think outside the box than high school seniors of 50 years ago. One candidate is studying a mechanism of plant biology she believes could help cure cancer. Another told me that when she does physics homework she first solves a problem, and then, to satisfy her curiosity, she looks for and often finds an alternative solution.

Did you do that in high school?

Despite the drumbeat of negativity in the daily news, the Generation Z students I interviewed all had heroes—some as retro as Teddy Roosevelt, others more modern, such as survivors of the Parkland, Florida, school shooting who have spoken out against gun violence.

Another applicant, also a long-distance runner, had to quit his track and cross-country teams his sophomore year so he could work up to 35 hours a week at a local grocery after his dad lost his job. With less time to study, his grades dropped.

“I was in turmoil,” he recalls of his family’s financial crisis. “I needed to keep my grades up, but I also needed to make money.” As it turned out, this young man found the grit and energy to accomplish both goals and worked his way up to assistant manager at the store. He joked about having “40-year-old guys asking me what to do,” and he performed at a high academic level in his junior and senior years.

None of the candidates I interviewed made the cut. In a different era, these talented youngsters who had humbled and surprised me might have been green-lighted by one of the most competitive colleges on Earth. Win, lose, or draw, I am eager to meet next year’s crop of local aspirants. At the least, I expect we will have memorable cross-generational talks.