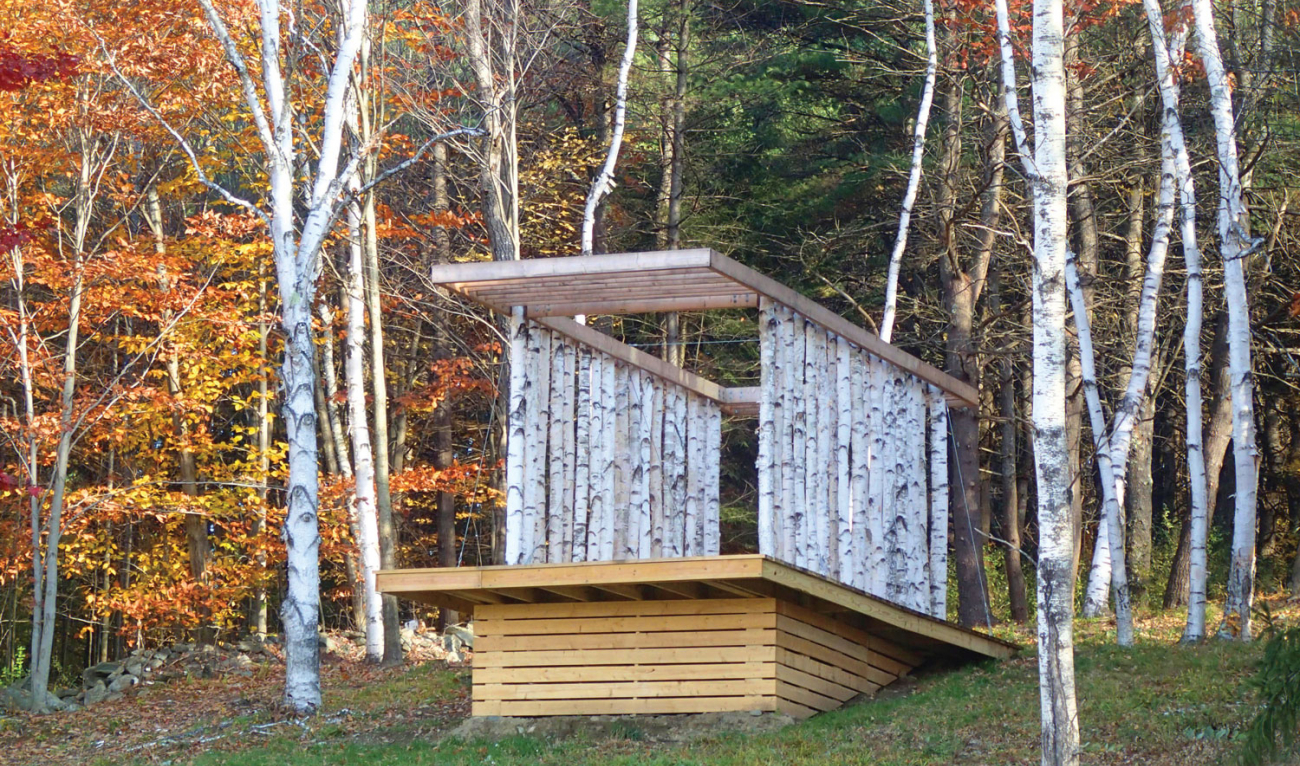 Pictured above: The Birch Pavilion is made of dozens of statuesque birch timbers that form an apse that faces Mount Ascutney. (Photo courtesy Moskow Linn Architects)

Scattered across a sprawling farm in Norwich, Vermont, sit seven pint-sized structures that defy conventional architecture. There’s the Chicken Chapel, a fiberglass-wrapped chicken coop that glows like a Japanese lantern at night. The Consumable Sugar Shack, nestled on a hill at the edge of a forest, has walls made entirely of split firewood used to fire up a maple syrup evaporator. In the summer the open-air structure serves as a tea house. And the Birch Pavilion—a place for family gatherings, yoga classes, even a memorial service—is made of dozens of statuesque birch timbers that form an apse that faces Mount Ascutney.

These whimsical, artful structures are the culminating achievements of architecture students who attend Studio North, a one-week summer workshop run by Keith Moskow and Robert Linn, his partner at Moskow Linn Architects in Boston. “It’s rewarding to work with students designing and building a structure in a seven-day period,” Moskow says. “Normally projects take years, and we are responding to clients’ desires and wishes. This is a chance to be our own clients.”

The idea began in 2009, with a swamp, $7,000 in materials, and a chance to win an architecture competition. Moskow and Linn designed a 580-square-foot gathering place at the edge of a 10-acre swath of wetlands in Newton, Massachusetts. After hauling the materials into the remote location, they built four teepee-like structures (a dining hut, two sleeping huts, and a cleansing hut with a pantry, storage, and composting toilet) surrounding a central outdoor deck and fireplace. They named it Swamp Hut.

“It wasn’t only thinking and drawing; it was sweating and building,” Moskow says. “We like thinking outside the box and looking at the way you can improve an urban situation by inserting a small piece of architecture.”

“We like thinking outside the box and looking at the way you can improve an urban situation by inserting a small piece of architecture.”

Since founding their firm in 1990, he and Linn have developed ambitious concepts that challenge the fundamentals of architecture and everyday life. In addition to designing schools, offices and high-end residential homes, they also have drawn up theoretical projects such as a floating champagne bar that elevates above the Charles River and a space-saving rental car storage unit à la Pez dispenser for Zipcars.

Swamp Hut did not win the competition, but it did inspire Studio North. At first, even Moskow was skeptical of the idea: “Come to Norwich, Vermont, work with two architects you’ve never heard of, and design and build something—and by the way, you have to pay for the experience?” (The workshop fee of $1,100 covers the cost of materials and food.) He was shocked when five students signed up for the inaugural program in 2011. Through 2017, seven to 10 undergrads, recent college graduates, and grad students—hailing from as far as Dubai and Ecuador and as near as Dartmouth—have gathered in Norwich in June for Studio North. The 2020 summer program, to be held on Martha’s Vineyard, Massachusetts, for the first time, was postponed to next summer because of Covid-19.

Working 12-hour days through every kind of weather, students design, develop, and build a structure under Moskow’s and Linn’s guidance. Some have never held a tool. Others are working architects. Every phase offers teachable moments. The first evening the group meets to sketch ideas and establish a design approach. “Some sketches are so far-fetched, it’s like, ‘Yeah that’d be great if we had two years and $2 million, but we have seven days and a few thousand dollars,’ ” Moskow says. “Students learn that you can have a concept, but when you actually have to do it yourself, you realize how hard it is.” 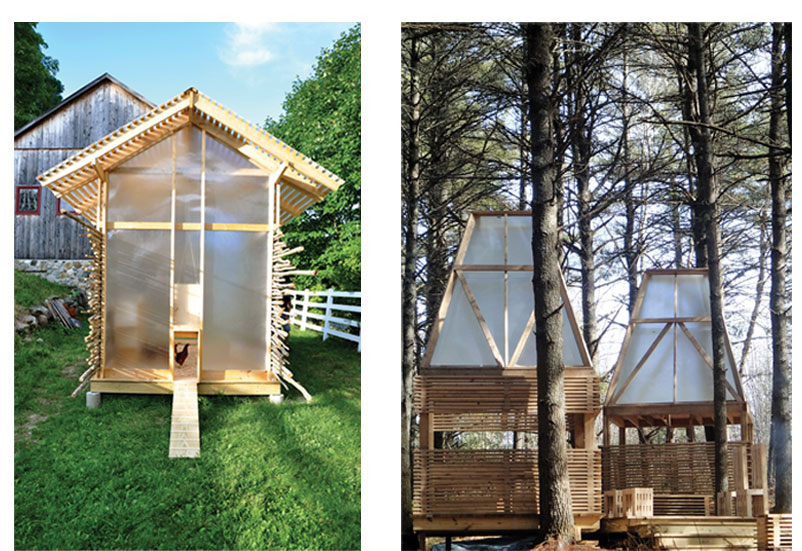 Dartmouth attracts all kinds of students, but it’s a safe bet that few freshmen arrive with dreams of becoming boat builders. That was Moskow. During his off-term junior fall, he set up a shop at his parents’ house in Newton, Massachusetts, and built Carolina dories—small motor boats, often used for commercial fishing. In search of more opportunities to solve problems and interact with others, he became an architect.

Moskow and Linn created the winning design for Massport’s 9/11 Memorial at Logan Airport in Boston. (Moskow calls it “a chapel for looking at the sky in a different way.”) Their 20-foot Ice Chimes sculpture—which creates music from collected ice and snow—was exhibited at the Rose Kennedy Greenway in Boston, then at Dartmouth. Their design for the Conservation Law Foundation headquarters won the first Sustainable Design Award from the Boston Society of Architects. They are now working on a 48-unit housing development in Newburyport, Massachusetts, with net-positive energy homes, food from a year-round greenhouse, and shared electric vehicles powered by a solar canopy.

“As architects, we’ve done much bigger projects with much bigger budgets, but there’s something satisfying about these little projects,” Moskow says of Studio North. “I have 30 years of experience, and it’s a way to transfer some of my knowledge to another generation of architects.”

One of those young architects is Laura Wu ’13. In 2015 she arrived at Studio North armed with a degree in economics and the nagging feeling that she may have chosen the wrong field. She’d never even held a hammer. “It was a long journey from econ major to architect, and Studio North was definitely a turning point in my career trajectory, where I realized, ‘Yes, I want to do this,’ ” says Wu. Now an architectural designer at Dattner Architects in New York City, she designs affordable housing. “In school you do what’s called ‘paper architecture,’ where you think of designs in your head and sketch them out or draw them on the computer. The act of actually building something, from start to finish, is really valuable—and rare these days in design education.”

Abigail Jones is a frequent contributor to DAM. She lives in New York City.