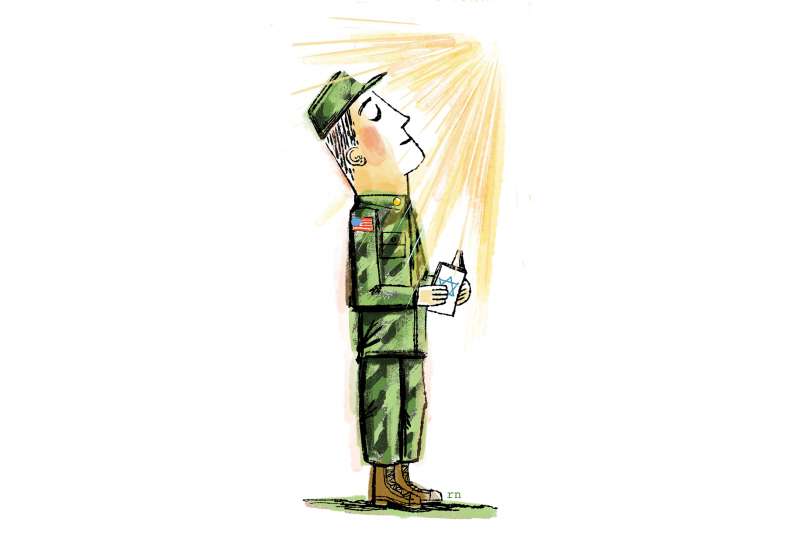 “I want to use my experiences in war and peace to illustrate how wrestling with the values of the Ten Commandments can provide a vision of faith to guide our lives and give us hope,” says Resnicoff. A rabbi and retired Navy chaplain, he’s writing Between the Commandments: From Decalogue to Dialogue, a theological work whose lessons are illuminated with stories from his life.

His struggle to obey the commandments includes an episode in Vietnam when he gave “false witness” by letting other officers persuade him to cover for their often-drunk commanding officer. “Through our words and actions we were ‘witnessing’ to the crew that they were in good hands, but they were not. I failed by keeping silent,” he recalls.

Raised in what he calls a “super-patriotic” family, Resnicoff, 72, was in Dartmouth’s Navy ROTC program. After he experienced combat in Vietnam, he spent two years as a naval intelligence officer before attending rabbinical school. During his 25-year career as a chaplain, he joined with other veterans to make the Vietnam Veterans Memorial about those who served, not the war. A Washington, D.C., resident, Resnicoff has opened sessions of the U.S. House and U.S. Senate with prayers 13 times—more than any other rabbi.

He was in Beirut in 1983 when a suicide truck bombing killed 220 Marines. “There were pieces of bodies all around. It was worse than any horror movie,” recalls Resnicoff, who comforted the wounded and rescuers. “There was humanity at its best that day, and a reminder not to give up the hope and dreams of what the world could be,” he wrote in a report for Vice President George H.W. Bush.

He cautions against despair in the face of the world’s problems. “If the time has not yet come when we can see the face of God in others, then let us see at least a face as human as our own,” he says. “Instead of looking at people as ‘the other,’ so that something divides us, let’s see in them that presence of God that unites us.”