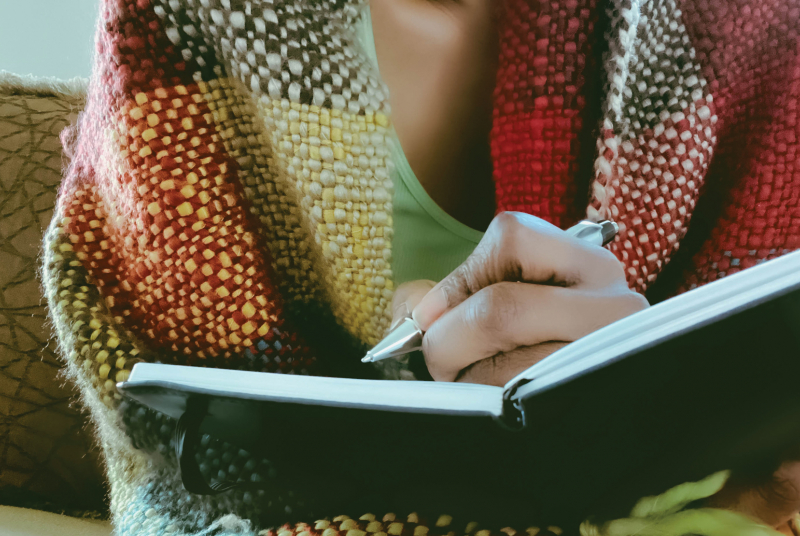 How to Use Affirmations
Kathryn Lively, Professor of Sociology/Dean of the College | March-April 2021

Affirmations are written statements designed to create self-change. They are most frequently used to create persistent change in a specific area of one’s life. They can also focus attention on goals throughout the day, which can promote positive and sustained change. Generally speaking, affirmations are used to reprogram the subconscious mind, to encourage us to believe certain things about ourselves or about the world and our place within it. They are also used to help us create the reality we want—often in terms of making, or attracting, wealth, love, beauty, and happiness. Recent research suggests that self-affirmations buffer stress and improve problem-solving in underperforming and chronically stressed individuals. Here are tips for developing your own affirmations.

WRITE IN THE FIRST PERSON.

Begin with “I” or “I am.” These words create statements of identity, which are powerful motivators for self-change. Examples: “I am secure and confident speaking in public,” “I enjoy eating healthy food,” “I love to exercise,” and “I am a loving and compassionate person.”

Always state your affirmations in the positive. For example, instead of saying, “I no longer enjoy the taste of cigarettes,” you might say, “I am completely free from cigarettes” or “I am a healthy person and I love the way my body feels when I make healthy choices.”

IMBUE YOUR AFFIRMATIONS WITH FEELING.

Affirmations have an emotional charge. Including emotional words is important because of the deep association we have between emotion words and somatic experiences. Instead of saying, “I spend time with my aging parents,” try “I feel such love and gratitude spending time with my mother and father.” Or instead of “I only eat healthy food,” which sounds suspiciously chore-like, try “I feel vibrant and alive when I make healthy choices for me.”

WRITE YOUR AFFIRMATIONS AS IF THEY ARE ALREADY HAPPENING.

This means affirming that “I am happy and confident” instead of “Two months from now I will be happy and confident” or “I am healthy and attractive” as opposed to “When I lose these last 10 pounds I will be healthy and attractive.” This step causes most people to falter, because sometimes they feel silly or disingenuous writing something they don’t yet believe—at least at a conscious level—is true. But remember, the purpose behind affirmations is to rewrite your subconscious mind, not your conscious mind.

Many holistic traditions suggest that if you act as if something is true, if you experience the feelings associated with the outcome that you want, the more likely it is for the outcome to materialize. That is, if you believe that you are attractive and healthy, and you adopt the identity of an attractive and healthy person, you will automatically engage in the behaviors associated with that (e.g. heightened self-care, exercise, etc.), which will help you to attain your goals.

A review of sources on writing effective affirmations also cautions against getting caught up in the “How.” This is because if you believe that you are a certain way, you will—subconsciously—figure out a way to make it work.

Scholars and practitioners alike also point out that affirming your current successes (that is, the things that you consciously know to be true already), in addition to affirming those things you want to create, may reduce any dissonance you have for making future-paced statements.

Dr. Henriette Anne Klausen, author of Write it Down and Make it Happen: Knowing What You Want and Getting It (2001), stresses the importance of writing your own affirmations—ones that speak to your deepest desires and use specific words or phrases that resonate with you personally. She also suggests that you update your affirmations regularly, in order to preserve their emotional potency, and that you write them by hand.

How do you use affirmations?

Once you’ve come up with a set of affirmations, you must use them. In order to be effective, affirmations must be used daily—at a minimum.

Some people recommend that you do affirmations first thing in the morning and last thing at night. Others recommend putting your affirmations on note cards and leaving them in plain sight, such as on your bathroom mirror, the steering wheel on your car, your computer monitor, or in your purse or wallet.

Different people have different modes of using affirmations. Some suggest that writing affirmations down on a daily basis is useful, because the act of writing something out is another mechanism through which the affirmation becomes part of the unconscious mind (also see psychologist Mark A. Pennebaker’s work on what he and his colleagues refer to as “narrative therapy”). Others, however, simply read or repeat affirmations from a list, a stack of cards, or most recently, from smartphone apps. A number of phone apps for purchase come pre-stocked with affirmations related to health, wealth, and relationships.

Self-affirmations were first popularized in the 1920s and have since been trumpeted by coaches and self-help gurus around the world. But do they work?

References to Napolean Hill’s classic Think and Grow Rich aside, recent evidence suggests that, yes, affirmations do work. Self-affirmations can protect against the damaging effects of stress on problem-solving performance and counteract ego-depletion. Self-affirmations also enhance our task-related performances and make us more receptive to our mistakes. Additionally, self-affirmations have also been shown to assist regular users in rewriting self-fulfilling prophecies pertaining to social rejection.

Notably, affirmations may also be used to change individuals’ behaviors in order to achieve particular outcomes. But in order to see real change or to achieve a desired outcome in the real world, Dr. Gabriele Oettingen, professor of psychology at New York University, suggests that the simple use of affirmations as described above may not only be unsuccessful, but also counterproductive!

Based on more than 20 years of experimental research on goal setting, cognition, motivation, and emotion, Oettingen’s work reveals that most folk knowledge about using affirmations to create real observable change lack two critical components: identifying obstacles and developing a practical plan to overcome those obstacles.

In what is now widely known as the WOOP (wish, outcome, obstacle, and plan) method, Oettingen and colleagues have worked across countless settings helping people change their understandings of themselves and their outcomes. Her research reveals that individuals who used this technique—which includes identifying the obstacles to wishes and outcomes and seeing (or imagining) themselves enact a plan to overcome those obstacles— significantly increased their likelihood of changing behavior, outcomes, and, eventually, identity.

Affirmations are statements that place us in an imaginary future where we are a better version of our current state.

In experimental classrooms around the world, Oettinger and colleagues found that students who were told to wish for a particular grade and to focus on the feelings associated with having it, were significantly less likely to achieve their goal compared with students who were also instructed to identify the obstacles to their achieving the desired outcome and to envision themselves enacting a plan to overcome them. For example, students who identified that they had time conflicts (i.e., an obstacle) were told to envision themselves taking the necessary steps to rearrange their schedule, including imagining themselves saying no to friends and family, to imagine themselves creating the time and space to study, and then actually studying were more likely to follow through on those behaviors in the real world in ways that would allow their wishes to become a reality so that they were able to attain their desired outcomes. Those students who did not identify the obstacles or imagine themselves enacting the plan got the emotional hit of getting the A, but not the actual A itself. In fact, because they were feeling so good about themselves, many actually studied less and did worse than before the intervention was introduced.

In sum, affirmations are statements that place us in an imaginary future where we are a better version of our current state. Although there are a lot of misconceptions about affirmations out there, research reveals that they do have the ability to protect our self-esteem, change our emotions, reset our understandings of who we are, and even improve our relationships by reminding us to be better friends, partners, colleagues, and family members. They can also be used, with the adoption of the WOOP method, to make tangible, measurable, and observable change in the real world when it comes to making progress toward specific goals, such as sticking to your diet over the holidays, getting a better grade on an exam, or playing a flawless concerto.

So while you may not wake up one day with a long-coveted Lamborghini in your driveway no matter how long you fantasize about doing just that and how good it would feel to go zipping down the California coast, you might just be able to get one by coupling those strategies with identifying the obstacles that currently stand in your way and imagining yourself taking—and eventually doing—the necessary steps to make your dreams a reality.

I have used self-change assignments in my classes at Dartmouth for a number of years. In addition to focusing on the psychological aspects, I have also layered in sociological theories of identity. Many students have been wildly successful—I’ve seen students drop considerable amounts of weight, improve their performance on the football field, improve their study habits, develop strong spiritual practices, stop eating meat, stop smoking, and even stop engaging in destructive behaviors such as cutting.

But the most interesting papers came from students who failed in their attempts to create visible, measurable change, but instead emerged with a nuanced understanding of both the psychological and sociological barriers to long-term, sustained, personal change. They learned something about themselves, and how they navigate the world—skills useful for a lifetime—and reported feeling more confident about realizing purposeful self-change going forward.