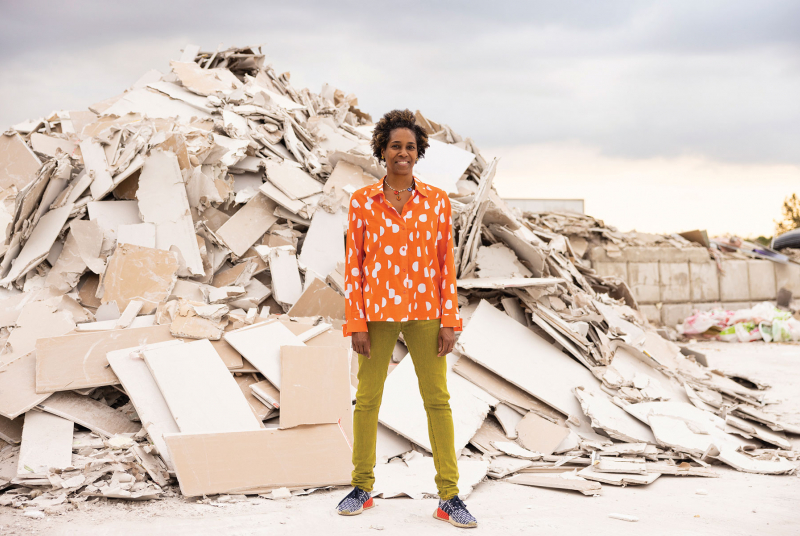 Photo by Ryan Collerd
Voices in the Wilderness

More than 5,000 African Americans are buried at the 19th-century Bethel Burying Ground on Queen Street in Philadelphia, but there’s only one headstone—that of 26-year-old Amelia Brown, who died in 1813. Olivier’s design for the Bethel memorial, to be completed in 2023, won the city’s multiyear competition to commemorate the site.

“We know history is written in pencil, and particularly for Black and Brown people it’s often hidden and revealed in fits and starts,” she says. “How do I make a work that allows multiple perspectives and narratives to come to the fore?”

Olivier and her twin, lawyer Karla ’89, were infants when their family, originally from Trinidad and Tobago, moved to New York City. A psychology major who is now a professor of sculpture at Temple University, Olivier is developing new work this year as a fellow in residence at Recycled Artists in Residency (RAIR), a Philadelphia program that encourages artists to use industrial waste and recycled materials in their art.

For the Bethel memorial, Olivier crafted elements to parallel meditations on loss, remembrance, and inequality that the site inspires. Marble pavers will be engraved with texts that evoke the lives of people buried there, in a font reminiscent of handwritten letters. And concrete pavers will have messages that appear only when damp, an allusion to the evanescence of the past and of the lost stories of many African Americans.

“Her memorial will be a beautiful, contemplative, and informative tribute to this burying ground and to the history of African Americans in Philadelphia and America,” says Margot Berg, former public art director of the Philadelphia Office of Arts, Culture and the Creative Economy.

“The future is grounded in these innumerable histories,” Olivier says. “It’s important that my work participate in this continually evolving American history and also include other narratives of our collective heritage.”