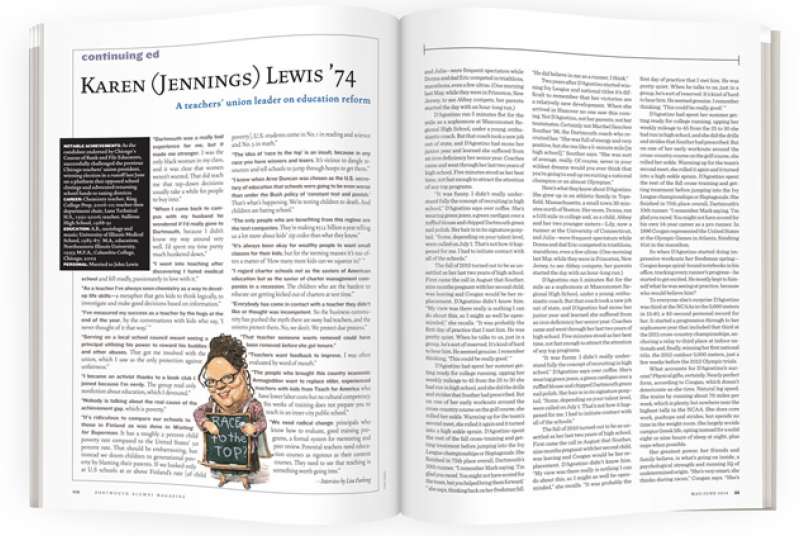 “Dartmouth was a really bad experience for me, but it made me stronger. I was the only black woman in my class, and it was clear that women weren’t wanted. That did teach me that top-down decisions usually take a while for people to buy into.”

“When I came back to campus with my husband he wondered if I’d really gone to Dartmouth, because I didn’t know my way around very well. I’d spent my time pretty much hunkered down.”

“I went into teaching after discovering I hated medical school and fell madly, passionately in love with it.”

“As a teacher I’ve always seen chemistry as a way to develop life skills—a metaphor that gets kids to think logically, to investigate and make good decisions based on information.”

“I’ve measured my success as a teacher by the hugs at the end of the year, by the conversations with kids who say, ‘I never thought of it that way.’ ”

“Serving on a local school council meant seeing a principal utilizing his power to reward his buddies and other abuses. That got me involved with the union, which I saw as the only protection against unfairness.”

“I became an activist thanks to a book club I joined because I’m nerdy. The group read only nonfiction about education, which I devoured.”

“Nobody is talking about the real cause of the achievement gap, which is poverty.”

“It’s ridiculous to compare our schools to those in Finland as was done in Waiting for Superman. It has a roughly 2 percent child poverty rate compared to the United States’ 30 percent rate. That should be embarrassing, but instead we doom children to generational poverty by blaming their parents. If we looked only at U.S schools at or above Finland’s rate [of child poverty], U.S. students come in No. 1 in reading and science and No. 3 in math.”

“The idea of ‘race to the top’ is an insult, because in any race you have winners and losers. It’s vicious to dangle resources and tell schools to jump through hoops to get them.”

“I knew when Arne Duncan was chosen as the U.S. secretary of education that schools were going to be even worse than under the Bush policy of ‘constant test and punish.’ That’s what’s happening. We’re testing children to death. And children are hating school.”

“The only people who are benefiting from this regime are the test companies. They’re making $512 billion a year telling us a lot more about kids’ zip codes than what they know.”

“It’s always been okay for wealthy people to want small classes for their kids, but for the teeming masses it’s too often a matter of ‘How many more kids can we squeeze in?’ ”

“I regard charter schools not as the saviors of American education but as the savior of charter management companies in a recession. The children who are the hardest to educate are getting kicked out of charters at test time.”

“Everybody has come in contact with a teacher they didn’t like or thought was incompetent. So the business community has pushed the myth there are many bad teachers, and the unions protect them. No, we don’t. We protect due process.”

“That teacher someone wants removed could have been removed before she got tenure.”

“Teachers want feedback to improve. I was often evaluated by word of mouth.”

“The people who brought this country economic Armageddon want to replace older, experienced teachers with kids from Teach for America who have lower labor costs but no cultural competency. Six weeks of training does not prepare you to teach in an inner-city public school.”

“We need radical change: principals who know how to evaluate, good training programs, a formal system for mentoring and peer review. Potential teachers need education courses as rigorous as their content courses. They need to see that teaching is something worth going into.”