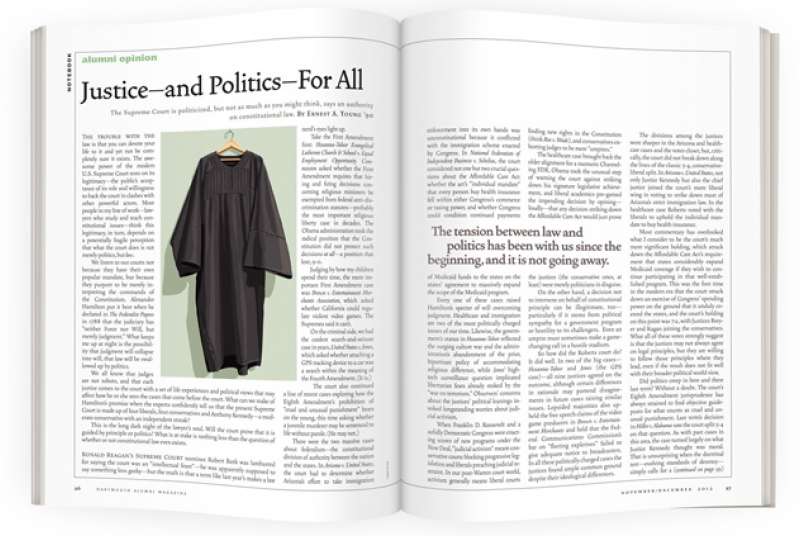 Justice and Politics For All

The trouble with the law is that you can devote your life to it and yet not be completely sure it exists. The awesome power of the modern U.S. Supreme Court rests on its legitimacy—the public’s acceptance of its role and willingness to back the court in clashes with other powerful actors. Most people in my line of work—lawyers who study and teach constitutional issues—think this legitimacy, in turn, depends on a potentially fragile perception that what the court does is not merely politics, but law.

We listen to our courts not because they have their own popular mandate, but because they purport to be merely interpreting the commands of the Constitution. Alexander Hamilton put it best when he declared in The Federalist Papers in 1788 that the judiciary has “neither Force nor Will, but merely judgment.” What keeps me up at night is the possibility that judgment will collapse into will, that law will be swallowed up by politics.

We all know that judges are not robots, and that each justice comes to the court with a set of life experiences and political views that may affect how he or she sees the cases that come before the court. What can we make of Hamilton’s promise when the experts confidently tell us that the present Supreme Court is made up of four liberals, four conservatives and Anthony Kennedy—a moderate conservative with an independent streak?

This is the long dark night of the lawyer’s soul. Will the court prove that it is guided by principle or politics? What is at stake is nothing less than the question of whether or not constitutional law even exists.

Ronald Reagan’s Supreme Court nominee Robert Bork was lambasted for saying the court was an “intellectual feast”—he was apparently supposed to say something less geeky—but the truth is that a term like last year’s makes a law nerd’s eyes light up.

Take the First Amendment first: Hosanna-Tabor Evangelical Lutheran Church & School v. Equal Employment Opportunity Commission asked whether the First Amendment requires that hiring and firing decisions concerning religious ministers be exempted from federal anti-discrimination statutes—probably the most important religious liberty case in decades. The Obama administration took the radical position that the Constitution did not protect such decisions at all—a position that lost, 9-0.

Judging by how my children spend their time, the more important First Amendment case was Brown v. Entertainment Merchants Association, which asked whether California could regulate violent video games. The Supremes said it can’t.

On the criminal side, we had the coolest search-and-seizure case in years, United States v. Jones, which asked whether attaching a GPS tracking device to a car was a search within the meaning of the Fourth Amendment. (It is.)

The court also continued a line of recent cases exploring how the Eighth Amendment’s prohibition of “cruel and unusual punishment” bears on the young, this time asking whether a juvenile murderer may be sentenced to life without parole. (He may not.)

There were the two massive cases about federalism—the constitutional division of authority between the nation and the states. In Arizona v. United States, the court had to determine whether Arizona’s effort to take immigration enforcement into its own hands was unconstitutional because it conflicted with the immigration scheme enacted by Congress. In National Federation of Independent Business v. Sebelius, the court considered not one but two crucial questions about the Affordable Care Act: whether the act’s “individual mandate” that every person buy health insurance fell within either Congress’s commerce or taxing power, and whether Congress could condition continued payments of Medicaid funds to the states on the states’ agreement to massively expand the scope of the Medicaid program.

Every one of these cases raised Hamilton’s specter of will overcoming judgment. Healthcare and immigration are two of the most politically charged issues of our time. Likewise, the government’s stance in Hosanna-Tabor reflected the surging culture war and the administration’s abandonment of the prior, bipartisan policy of accommodating religious difference, while Jones’ high-tech surveillance question implicated libertarian fears already stoked by the “war on terrorism.” Observers’ concerns about the justices’ political leanings invoked longstanding worries about judicial activism.

The healthcare case brought back the older alignment for a moment: Channeling FDR, Obama took the unusual step of warning the court against striking down his signature legislative achievement, and liberal academics pre-gamed the impending decision by opining—loudly—that any decision striking down the Affordable Care Act would just prove the justices (the conservative ones, at least) were merely politicians in disguise.

On the other hand, a decision not to intervene on behalf of constitutional principle can be illegitimate, too—particularly if it stems from political sympathy for a government program or hostility to its challengers.  Even an umpire must sometimes make a game-changing call in a hostile stadium.

So how did the Roberts court do? It did well. In two of the big cases—Hosanna-Tabor and Jones (the GPS case)—all nine justices agreed on the outcome, although certain differences in rationale may portend disagreements in future cases raising similar issues. Lopsided majorities also upheld the free speech claims of the video game producers in Brown v. Entertainment Merchants and held that the Federal Communications Commission’s bar on “fleeting expletives” failed to give adequate notice to broadcasters. In all these politically charged cases the justices found ample common ground despite their ideological differences.

The divisions among the justices were sharper in the Arizona and healthcare cases and the votes closer, but, critically, the court did not break down along the lines of the classic 5-4, conservative-liberal split. In Arizona v. United States, not only Justice Kennedy but also the chief justice joined the court’s more liberal wing in voting to strike down most of Arizona’s strict immigration law. In the healthcare case Roberts voted with the liberals to uphold the individual mandate to buy health insurance.

Most commentary has overlooked what I consider to be the court’s much more significant holding, which struck down the Affordable Care Act’s requirement that states considerably expand Medicaid coverage if they wish to continue participating in that well-established program. This was the first time in the modern era that the court struck down an exercise of Congress’ spending power on the ground that it unduly coerced the states, and the court’s holding on this point was 7-2, with Justices Breyer and Kagan joining the conservatives. What all of these votes strongly suggest is that the justices may not always agree on legal principles, but they are willing to follow those principles where they lead, even if the result does not fit well with their broader political world view.

Did politics creep in here and there last term? Without a doubt. The court’s Eighth Amendment jurisprudence has always strained to find objective guideposts for what counts as cruel and unusual punishment. Last term’s decision in Miller v. Alabama saw the court split 5-4 on that question. As with past cases in this area, the case turned largely on what Justice Kennedy thought was moral. That is unsurprising when the doctrinal test—evolving standards of decency—simply calls for a largely untethered moral judgment, and it suggests that the court should consider a more law-like framework. On the other hand, there are worse things than to be ruled sometimes by the gut instincts of a profoundly decent, moderate person.

If you think everything at the Supreme Court comes down to a rigid conservative-liberal split, you will overlook most of the interesting things that are going on.

You would miss, for example, Justice Breyer’s effort to rethink progressive constitutional jurisprudence in terms of a more pragmatic calculus that focuses on real-world consequences, Justice Thomas’ emergence from the shadow of Justice Scalia and the late Chief Justice Rehnquist as a distinctive and original conservative voice, and John Roberts’ wrestling with the obligations of the chief justice as judicial statesman, charged not only with getting individual cases right but also with safeguarding the institutional role and legitimacy of the court.

One good term will not put an end to charges that the Supreme Court is political. The tension between law and politics has been with us since the beginning, and it is not going away. Next term has already teed up cases renewing the long war over affirmative action in higher education, and the court seems likely to also consider the constitutionality of the federal Voting Rights Act and Defense of Marriage Act. Observers will continue to handicap these cases based on the justices’ ideological predispositions, and they will view the rulings through a political lens. But when law professors lie awake at night, wondering whether the rules and doctrines they teach each day are just masks for a political choice, it helps to know that the court continues to transcend our skepticism.

Ernest A. Young, a graduate of Harvard Law School, is the Alston & Bird Professor of Law at Duke University. Much of what he knows about constitutional law came from Professor Vincent Starzinger’s Govy 60 course.