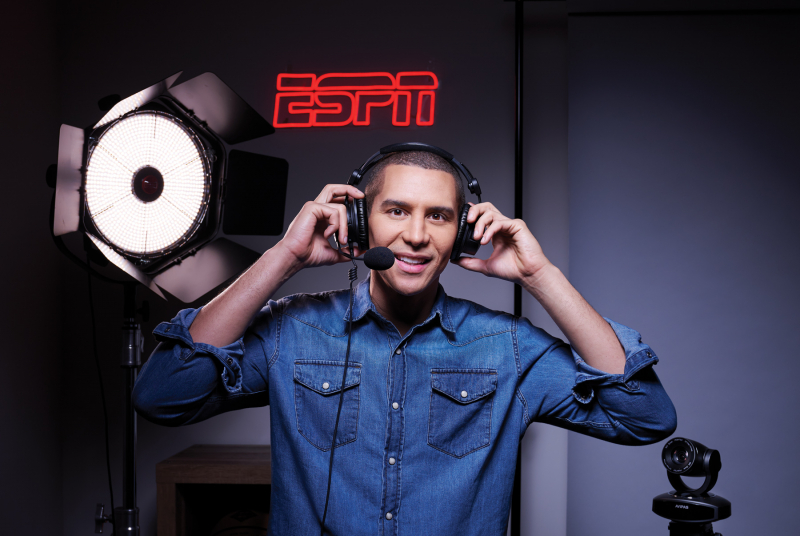 An accomplished high school baseball player from New York City, John Schriffen planned to walk onto the team at Dartmouth. But during the first week of practice he injured his elbow. As a pitcher, that was a kiss of death.

“It was devastating,” Schriffen says. “As a lifetime athlete that was my identity. But it turned out to be the best thing that ever happened to me.”

A friend who worked at WDCR invited Schriffen to try his hand at calling Big Green baseball games. Soon he was calling other sports too—hockey, basketball, football. “And then it just kind of snowballed into, ‘Wow, maybe I could make a career out of this thing,’ ” he says.

The 36-year-old former history major has been a professional sports broadcaster for more than a decade. He has called everything from MLB to college football and the NFL. As former host of That Other Pregame Show on CBS Sports, he has interviewed athlete-legends such as Lebron James.

Last August Schriffen moved to ESPN, where he was among the first wave of sports broadcasters to do live play-by-play from home during the pandemic.

Calling live sports from home was uncharted territory last summer when, with American professional sports canceled due to the pandemic, ESPN turned to airing games from the Korean professional baseball league. Broadcasting from his apartment in downtown Los Angeles came with a steep learning curve. “The first thing was just figuring out the technology, because the way we broadcast is over a Zoom feed,” Schriffen remembers. ESPN sent him what it calls the “At-Home” kit: a laptop, an audio box with headset, an iPad and accompanying stand to deploy as the camera set-up—and lights, which Schriffen arranged before every broadcast.

For his background, he placed some books about sports and broadcasting and displayed the jersey he wore when he played in the celebrity NBA all-star game in 2013.

Then came the games, which presented another challenge because Schriffen knew so little about the teams. “Yes, it’s baseball,” he says. “But American audiences had never seen these players before. So now we’re trying to introduce them and tell stories and get viewers to take an interest and fall in love with watching the game.” ESPN hired an analyst in Korea, an expert who could answer live questions from Schriffen and his fellow broadcasters (all zooming from their homes) during games. “We got into Korean culture, how they were able to handle Covid, the food, the dialect,” he says. “He was our expert on everything. We treated it like we were just fans and he was just filling us in.”

It made for fun and engaging shows, with the broadcasters learning along with American viewers in real time.

The live-broadcast format at ESPN, which doesn’t follow a particular structure or prewritten talking points or questions, gave broadcasters added flexibility. “We could talk about whatever we want. There’s no script,” Schriffen says. When MLB returned last summer after the murder of George Floyd, and players were kneeling and linking arms in protest against racial injustice and police brutality, Schriffen—one of only a handful of Black play-by-play broadcasters on TV—steered the conversation in the direction of the social justice issues he cares about deeply.

“Being a Black broadcaster and being the quarterback of the team, I was able to bring up discussions that were important to me,” he says. “These were tough discussions that needed to be talked about. I want to make sure that we’re talking about them to a national audience.”

Veteran broadcaster Mark Jones, who has mentored Schriffen since his move to ESPN, encourages his protégé to speak up. “There’s not a lot of us who do this,” says Jones. “In the wake of Floyd being killed by the Minneapolis police, I think you would be committing journalistic malpractice not to document the thoughts and the vibrations and the conversations of Black athletes from the NBA, the NFL, college football, college basketball—sports that are, for the most part, predominantly Black. John is very well prepared to do that.”

In March, Schriffen called the college basketball National Invitation Tournament (NIT) for ESPN and traveled to Frisco, Texas, to call the games onsite—a sign that things in the world of sports television might be returning to normal.

But Schriffen has enjoyed his time working from home. He used the extra downtime during the pandemic to work on a side hustle. Inspired by his experience taking care of his dog Charlie—“the world’s most amazing boxer mix,” says Schriffen—he came up with a new product, a modern and hyper-hygienic take on the doggie poop bag. Poupé is a dog-waste canister that features extra thick bags and disinfectant handwipes. (“It’s possible to feel clean after picking up poo,” Schriffen’s product website promises.)

Despite the onsite broadcast for the NIT, Schriffen predicts that he’ll continue to broadcast sports from his new home back in New York City. He’ll set up the iPad camera and lights before every broadcast.

Even in the comfort of his own pad, he still respects what he refers to as the cardinal rule of broadcasters: Never look at Twitter during a game. (The comments were particularly harsh when they first started broadcasting games while wearing masks. “We can’t hear you! It sounds like you’re talking into your armpit!” according to one comment Schriffen remembers.)

Usually, he just tunes out the online trolls.

“The best people in this business are their own worst critics,” Schriffen says. “So when you hear stuff on social media it doesn’t really get to you because there’s nothing out there that you haven’t said to yourself.”

Joseph Babcock wrote about Minh Lê ’01 in our September/October 2020 issue. He lives in California.