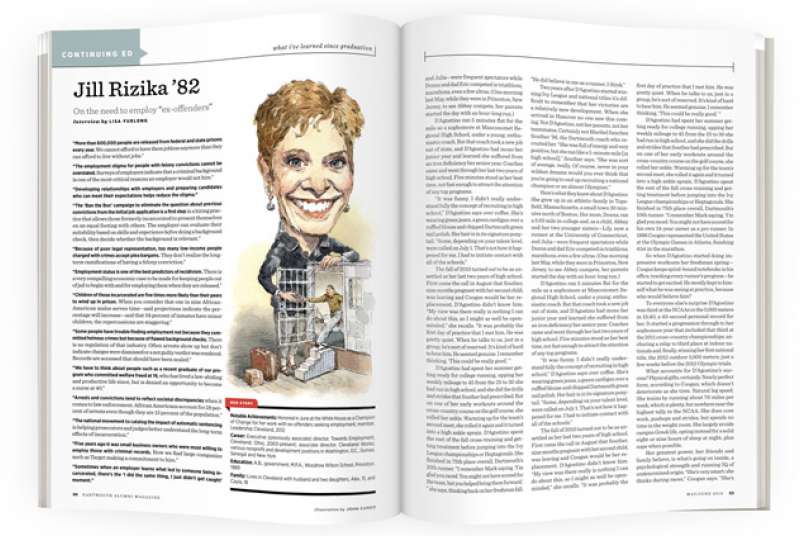 Notable Achievements: Honored in June at the White House as a Champion of Change for her work with ex-offenders seeking employment; member, Leadership Cleveland, 2012

Family: Lives in Cleveland with husband and two daughters, Alex, 15, and Cayla, 18

“More than 600,000 people are released from federal and state prisons every year. We cannot afford to have them jobless anymore than they can afford to live without jobs.”

“The employment stigma for people with felony convictions cannot be overstated. Surveys of employers indicate that a criminal background is one of the most critical reasons an employer would not hire.”

“Developing relationships with employers and preparing candidates who can meet their expectations helps reduce the stigma.”

“The ‘Ban the Box’ campaign to eliminate the question about previous convictions from the initial job application is a first step in a hiring practice that allows those formerly incarcerated to present themselves on an equal footing with others. The employer can evaluate their suitability based on skills and experience before doing a background check, then decide whether the background is relevant.”

“Because of poor legal representation, too many low-income people charged with crimes accept plea bargains. They don’t realize the long-term ramifications of having a felony conviction.”

“Employment status is one of the best predictors of recidivism. There is a very compelling economic case to be made for keeping people out of jail to begin with and for employing them when they are released.”

“Children of those incarcerated are five times more likely than their peers to wind up in prison. When you consider that one in nine African-American males serves time—and projections indicate the percentage will increase—and that 54 percent of inmates have minor children, the repercussions are staggering.”

“Some people have trouble finding employment not because they committed heinous crimes but because of flawed background checks. There is no regulation of that industry. Often arrests show up but don’t indicate charges were dismissed or a not guilty verdict was rendered. Records are accessed that should have been sealed.”

“We have to think about people such as a recent graduate of our program who committed welfare fraud at 19, who has lived a law-abiding and productive life since, but is denied an opportunity to become a nurse at 40.”

“Arrests and convictions tend to reflect societal discrepancies when it comes to law enforcement. African Americans account for 28 percent of arrests even though they are 13 percent of the population.”

“The national movement to catalog the impact of automatic sentencing is helping prosecutors and judges better understand the long-term effects of incarceration.”

“Five years ago it was small business owners who were most willing to employ those with criminal records. Now we find large companies such as Target making a commitment to hire.”

“Sometimes when an employer learns what led to someone being incarcerated, there’s the ‘I did the same thing, I just didn’t get caught’ moment.”