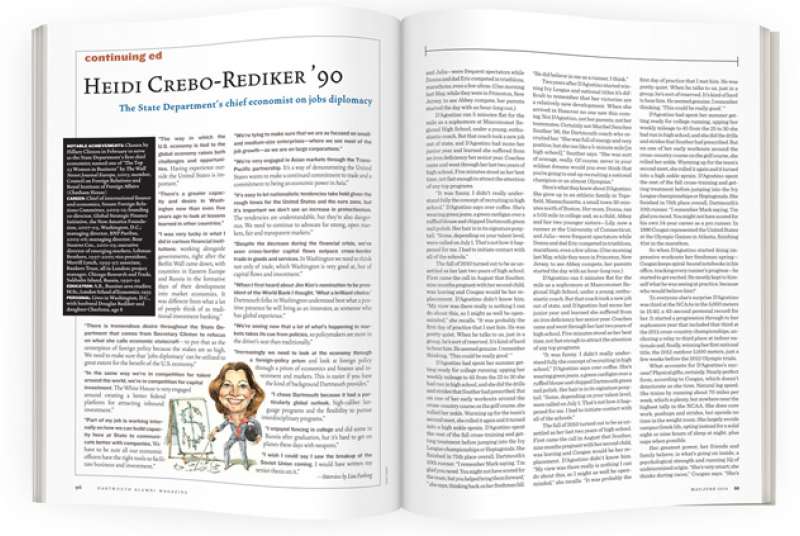 Notable Achievements: Chosen by Hillary Clinton in February to serve as the State Department’s first chief economist; named one of “The Top 25 Women in Business” by The Wall Street Journal Europe, 2003; member, Council on Foreign Relations and Royal Institute of Foreign Affairs (Chatham House)

“The way in which the U.S. economy is tied to the global economy raises both challenges and opportunities. Having experience outside the United States is important.”

“There’s a greater capacity and desire in Washington now than even five years ago to look at lessons learned in other countries.”

“I was very lucky in what I did in various financial institutions: working alongside governments, right after the Berlin Wall came down, with countries in Eastern Europe and Russia in the formative days of their development into market economies. It was different from what a lot of people think of as traditional investment banking.”

“There is tremendous desire throughout the State Department that comes from Secretary Clinton to refocus on what she calls economic statecraft—to put that as the centerpiece of foreign policy because the stakes are so high. We need to make sure that ‘jobs diplomacy’ can be utilized to great extent for the benefit of the U.S. economy.”

“Part of my job is working internally on how we can build capacity here at State to communicate better with companies. We have to be sure all our economic officers have the right tools to facilitate business and investment.”

“We’re tying to make sure that we are as focused on small- and medium-size enterprises—where we see most of the job growth—as we are on large corporations.”

“We’re very engaged in Asian markets through the Trans-Pacific partnership. It’s a way of demonstrating the United States wants to make a continued commitment to trade and a commitment to being an economic power in Asia.”

“It’s easy to let nationalistic tendencies take hold given the rough times for the United States and the euro zone, but it’s important we don’t see an increase in protectionism. The tendencies are understandable, but they’re also dangerous. We need to continue to advocate for strong, open markets, fair and transparent markets.”

“When I first heard about Jim Kim’s nomination to be president of the World Bank I thought, ‘What a brilliant choice.’ Dartmouth folks in Washington understood best what a positive presence he will bring as an innovator, as someone who has global experience.”

“We’re seeing now that a lot of what’s happening in markets takes its cue from policies, so policymakers are more in the driver’s seat than traditionally.”

“Increasingly we need to look at the economy through a foreign-policy prism and look at foreign policy through a prism of economics and finance and investment and markets. This is easier if you have the kind of background Dartmouth provides.”

“I chose Dartmouth because it had a particularly global outlook, high-caliber language programs and the flexibility to pursue interdisciplinary programs.”

“I enjoyed fencing in college and did some in Russia after graduation, but it’s hard to get on planes these days with weapons.”

“I wish I could say I saw the breakup of the Soviet Union coming. I would have written my senior thesis on it.”