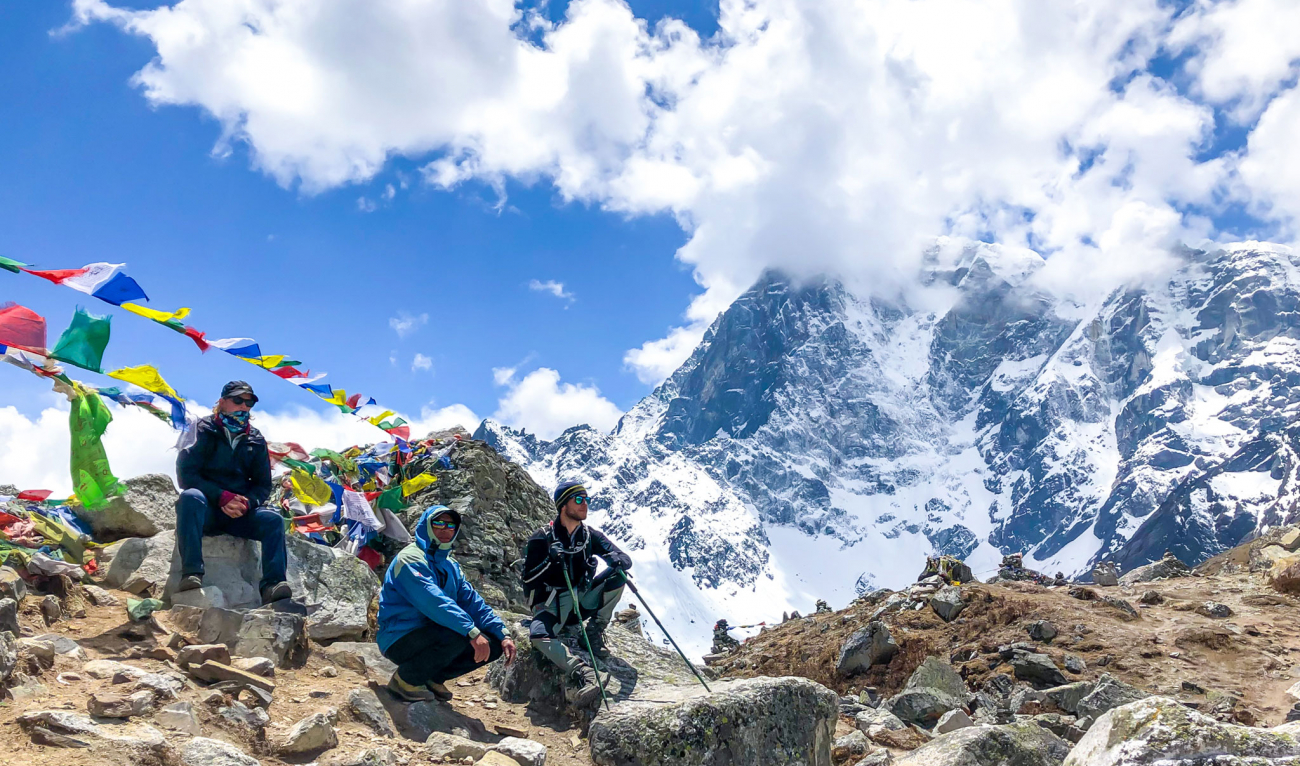 I sit behind my desk, scrolling through endless numbers on a spreadsheet, trying to determine the effectiveness of an advertising campaign I am running for a client. I’ve had five cups of coffee, my head is throbbing, and I need a break. Looking around the room, searching for a way to procrastinate, I see nothing but heads buried in screens—so I get up and go for a walk outside. The bustle of Boston doesn’t offer much relief—the honk of horns, the cacophony of construction, people pushing past in a hurry to get wherever their daily routine takes them.

I need peace and quiet.

The weekend arrives and I travel up to my parents’ home in the woods of New Hampshire and spend the evening outside, lying on the grass and looking at the stars. My heart rate slows, my mind clears. I feel peace and know it’s directly linked to my closeness with nature.

That weekend, two years ago, was a pivotal one. When I returned to work on Monday my mind buzzed with indecisiveness. Is this what I want to do for the rest of my life? Or even for another year? I yearned for an experience that would take me to the most beautiful landscapes—to the corners of the world explored by only a small percentage of people, to feel peace every day, and most importantly, to learn about the women and men who live in remote places.

For the next month, I constantly floated an idea around to my parents and close friends: I wanted to quit work, travel the world, and live out of a backpack. I prepared myself for the inevitable looks of concern, especially from my parents, but when I brought up the idea, I received genuine support. If my parents believed in this crazy idea of mine, then maybe I could make it a reality. My friends urged me on: “If not now, when?”

I quit my job in July 2018 and left home with my best friend, Jimmy, a goofball with curly brown hair, a large personality, and a booming laugh. We planned to head west through California, to Hawaii, then on to Fiji, Australia, and Asia, through the Middle East, Africa, and Europe before returning home to New Hampshire a year later.

For the first few months we lounged on beautiful beaches across the Pacific, went fishing, and hiked as often as we could. These days were filled with joy—meeting new backpackers and hearing their stories—yet I knew this was not the type of travel I’d envisioned. I wanted to connect and build relationships with people living in worlds unlike any I’d seen.

Three months after leaving Australia, we arrived in Kathmandu, Nepal. After purchasing gear, we packed into a Jeep with 10 Nepalese passengers for a bumpy, 15-hour ride to Rappcha to meet our guide, Sokol, who would lead us to Mount Everest Base Camp during the next two weeks. Sokol, a middle-aged man, was skinny but muscular, standing 5-foot-5 with deep wrinkles around his eyes and mouth. He wore the same faded, navy blue Adidas jumpsuit with rainbow stripes every day. He was also a man of few words. When I would ask if the day’s hike would be difficult, he would always tilt his head to the side as if to ponder for a moment before replying, “Mhmm, yes, I think.”

The first three days of our trek were strenuous—each consisting of eight-hour hikes above 10,000 feet as pouring rain soaked our packs and turned the trail to mush. The thought of failure lurked in the back of my mind. Altitude sickness scared me, and I wasn’t certain I’d reach base camp. On the morning of the fourth day, I woke on a thin mattress in the basement of a teahouse with a throbbing headache and the chills. I had the flu. Sokol brought me water and lentil soup, while Jimmy set out on a steep, two-hour hike to the nearest town that would have Tylenol and Advil. My symptoms only worsened by night, and I began to vomit. Sokol secured a helicopter to take me to Kathmandu’s hospital. It hurt to imagine my journey ending like a dream that vanishes as you open your eyes. I was crushed.

Sokol and Jimmy helped me hobble down the rocky path toward the helipad, 20 minutes from the teahouse. A small chopper sat on a flat patch of grass; the propellers at full speed, invisible to the eyes but deafening to the ears. Thick gray clouds blew in and consumed the sky above us. It felt like a scene from a Stephen King novel. Less than a hundred yards away, the helicopter lifted off and spun out of sight behind the clouds. I looked at Sokol and saw a worried face. Then a tall Nepalese man with thick eyebrows and short black hair ran toward us. “You’ll have to wait ’til morning. No visibility today,” he said. I could barely stand at that point, feeling nauseous and cold. Sokol prepared a bed for me at the helipad teahouse; we’d catch the first flight in the morning. I popped four Advil and dozed off on a dingy pillow.

I awoke early the next morning to find my head propped up with a second pillow. I glanced over to see Sokol sleeping in the bed next to me, head against his pack. He sat up and cracked his neck. “You needed good sleep,” he said. I was overwhelmed by his gesture. Minutes later the helicopter pilot cracked the door. “Time to go, friend,” he said. To my astonishment—and for Sokol and Jimmy, too—my symptoms had abated. “I think I’m okay,” I muttered. The pilot nodded and left. Sokol grinned and jumped up. “On to base camp,” he said.

My symptoms returned and slowed my pace during the next few days, but with the help of Sokol and Jimmy, we all arrived at the foot of Mount Everest 10 days after I first fell ill. We walked through the camp, following Sokol like kids behind their teacher on a field trip. The altitude had a dizzying effect, so we rested on massive boulders and peered up at the formidable peak. Sokol opened a sleeve of stale crackers. For 30 minutes Jimmy and I watched Sokol hop around from tent to tent, laughing with Sherpas and fellow guides. Before we left, he took a selfie with me. He posed, pointing toward the peak with a wide smile across his face like a child on Christmas morning. Nothing I’d experienced compared to this moment—I had never felt such camaraderie with someone I’d known for only a few weeks. 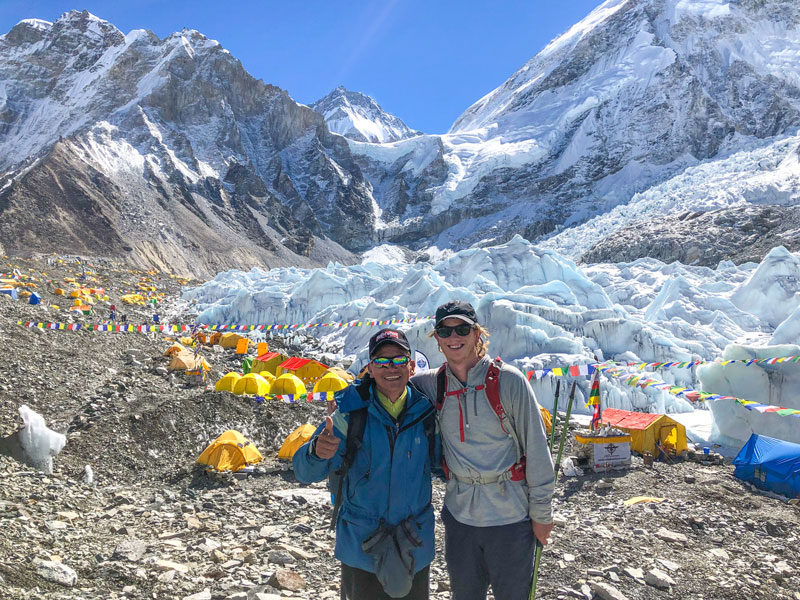 Lynch, right, with his trekking guide Sokol at Everest Base Camp

Before I knew it, we were back in Kathmandu preparing for our next adventure to Japan. Five months later, I was home with my family. It has been a year since I hiked in the Himalayas. Now, living in Denver and keeping close to the mountains, I have begun working as a freelance writer—sharing my stories and searching for new ones.

I learned an important lesson that day in Nepal, waking up in a stuffy teahouse to see Sokol attempting to sleep on his backpack while his pillow was stuffed underneath mine: There are good people everywhere, and if you allow yourself to be vulnerable, even with people you may not know yet, you will create a relationship built around trust. Sokol cared for me when I needed help and changed my attitude toward every individual I met along the rest of my journey around the world.

Hayden Lynch lives in Denver and is a freelance writer. Write to him at hlynch678@gmail.com.