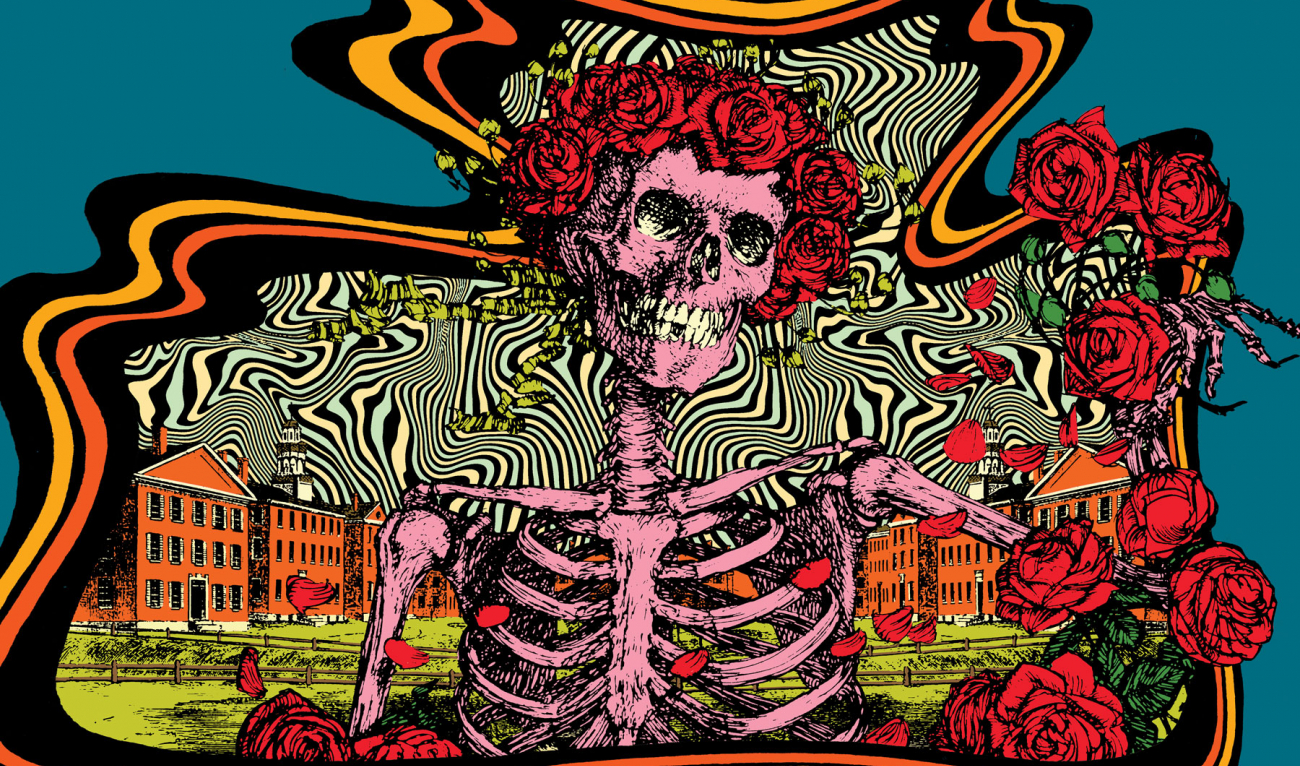 Few who were there forget—okay, some don’t remember a thing—when the Grateful Dead played Thompson Arena in 1978.
Ethan Weinstein ’21 | March-April 2022

Despite performing more than 2,000 concerts around the world, the Grateful Dead played only one show in New Hampshire: Dartmouth’s Green Key Weekend on May 5, 1978.

In some ways, it was like any other Dead show. Students dropped acid and smoked pot, grooving to three hours of music across two sets. In other ways, the gig was unprecedented: The Dead was one of the most popular and “out there” bands the College had ever welcomed. Rarely had Hanover seen such a mass of longhairs overtake the town.

“It kind of felt like, wow, this is my community if they’re having the Dead come for the big concert my senior year,” recalls Vicki Smith ’78. For students such as David Shoemaker ’78, the Dead provided “the soundtrack to my Dartmouth experience.”

But times were changing. “The atmosphere on campus was becoming increasingly conservative,” he adds. “I really felt that in some ways we represented the last of that 1960s, early 1970s counterculture. It was absolutely dying.” Or, as Winslow Colwell ’78 puts it: “At the time, there were relatively few people who, you know, let their freak flag fly.”

Rising to fame in the late 1960s, the Dead—led by Jerry Garcia—garnered praise for its extended jams and anything-could-happen live shows, all fueled by psychedelic drugs. By the time the band played Dartmouth, the Dead had released 10 studio albums, including its most recent, the 1977 Terrapin Station.

News of the Dead’s Green Key concert reached Hanover on April 19. Tickets cost $10 for students, $12 for everyone else. Hoping to score the best seats, students pitched tents behind the Hopkins Center three nights before the box office opened on April 26. A Big Green equivalent of Shakedown Street—the nomadic tent city of touring “Deadheads”—went up in the Hop courtyard. People tossed Frisbees. They brought kegs. And they blasted the Dead, their speakers bouncing the sound off the brick walls. By the time tickets went on sale, the encampment had grown to 383 students.

As they say, if you remember the show, perhaps you weren’t there. Still, we found alumni able to conjure memories from the haze. These are their stories. 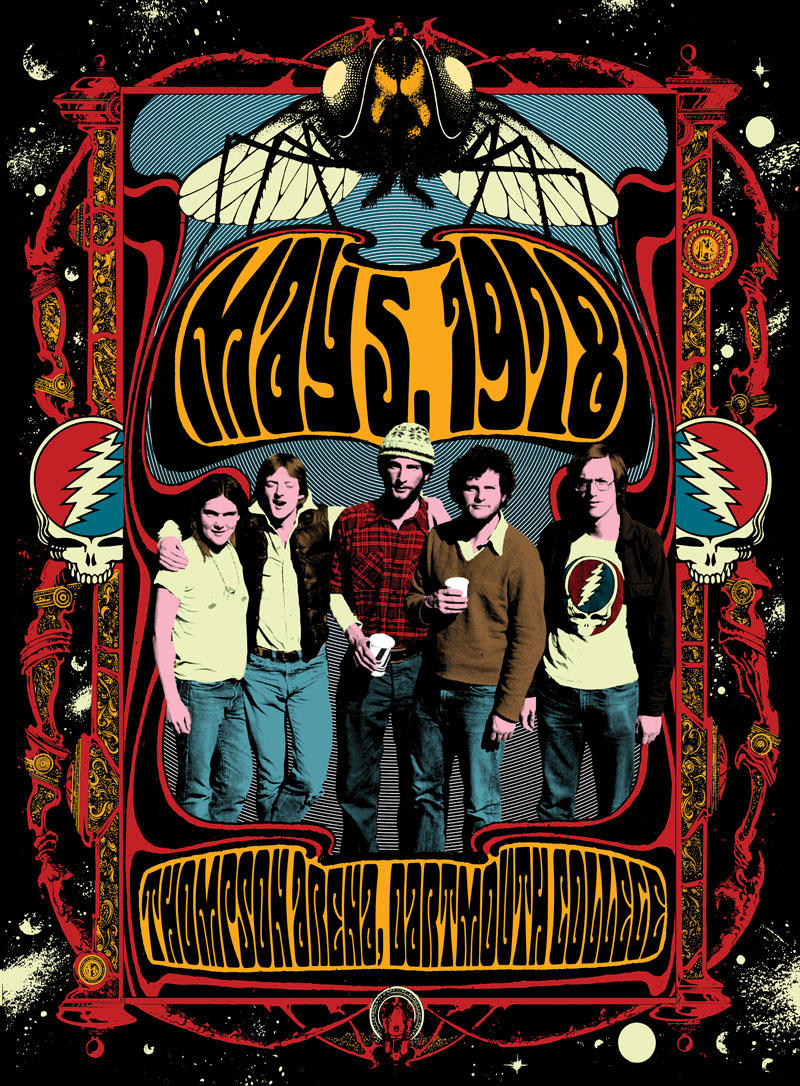 PHIL GIBBS ’81: “It was Bill Crowe ’81 and me—we started camping. Some other Grateful Dead fans said, ‘Hey, that’s the way you do it.’ So they joined us in the line.”

WINSLOW COLWELL ’78:  “We created a system back there in the courtyard. The first people who arrived had their names at the top of the paper list, and you could leave in order to attend classes. But you basically were promising to be there for the bulk of the time in order to maintain your place in line.”

RICK BARROWS ’78: “They had roll call—very organized, everybody had their spot. So that was that. It was a very cool scene to see the community self-organizing.”

JACK MANHEIMER ’78: “I’d been there for four years, and Dartmouth is not a giant place, but there were people I met during those days camping out that I didn’t know before.”

TOM JEFFERY ’78: “At sunrise [the day tickets went on sale], someone blasted Jimi Hendrix’s ‘Star-Spangled Banner.’ That was what woke us all up, which, you know, was cool—but the box office doesn’t open for another three hours so what the hell are you doing?”

JON HERRON ’81: “When a band would come into town, there’d be an open call for crew: drivers or roadie-helpers, amp humpers, that sort of thing. The Grateful Dead were asking for somebody who had cooked. So that’s what I ended up doing. I basically became the sous-chef.”

COLWELL: “There was the guy who was the head caterer. He introduced himself as Psy, which, you know, didn’t seem unusual. I learned later that his last name, which probably was not given to him by his parents, was Chosis. His name was Psy Chosis. But everyone knew him as Psy. He was a sweet guy and took me in. I still actually practice some of the things that he taught me, such as his way of cutting an onion and garlic.”

BARROWS: “The story I heard was that the band was staying at the Sheraton in West Lebanon [New Hampshire], and they were running around with a container—like a diner sugar dispenser—full of cocaine. That would be a large amount of cocaine.”

COLWELL: “I was very impressed at how seriously they took their food. I know that there was a cake, a ridiculously sweet cake. I remember Jerry attacking the cake, which has haunted me as I read about the guy’s issues with diabetes and such later in his life.”

GIBBS: “For some reason, they assigned Bill [Crowe] to drive the van to pick up the band. They assigned me to go with him, although it seemed crazy to give a couple of freshmen that job. But they did. When it was time to pick up Bob Weir, we drove to West Lebanon. Weir came out real pleasant and happy and more clean-cut-looking than what I was expecting. But what did I know?”

DAVID SHOEMAKER ’78: “I spent the entire day of the concert at Thompson Arena hanging lights and stringing cables and all of that stuff. The band was loose when they came out to do the soundcheck. The guys were appreciative of the crew, which was really affirming because that’s exactly what I wanted.”

COLWELL: “The first band member to arrive was Jerry [Garcia]. He sauntered in, and at this point my heart’s thumping because here’s this guy who I revered and respected so much. Psy tossed me a bag of Hawaiian pot and asked if I could roll a one-paper joint—which I was capable of doing. Psy and Jerry and I smoked it together sitting at the table. I remember our conversation, because the thing that impressed me just chatting with Jerry was that he took me seriously. I mean, I was a 21-year-old kid, I was nobody, and he was an astonishingly good listener.”

CHIP BLOUGH ’78: “I wandered down toward the front to see where the equipment was set up. And this one guy goes, ‘Oh s***, I need one more person on security here.’ And I said, ‘I can help.’ I ended up in a space in front of the stage and stood right in front of Garcia that night.”

PETER WELLER ’81: “It was funny because everybody from campus had gotten advance tickets and were toward the front. All the Deadheads who got tickets later were in the back. As the lights went down, they kind of changed places.”

SHOEMAKER: “The acoustics were horrible. It’s a freakin’ concrete hockey arena for god’s sake. But musically, it was a pretty good concert.”

BILL FRITZ ’78 : “I was over-the-top excited. It was just so cool. A lot of people said the sound was horrible, but I really don’t remember that.”

Harriet Schwartz ’78: “I ushered. I remember giving up on the no recording and no photography rules because there was just no way to keep up.”

WELLER: “The energy from the band would get the crowd going, and the energy would go back to the band.”

SHOEMAKER: “We have front row seats, we’re just standing on our chairs, and I have an unobstructed view of the stage. Jerry Garcia is 15 feet away from me. Of course we’re all singing along because we all know the words. And there I am standing up on my chair, and Jerry and I have a moment. He looks over, he sees me, he catches my eye, we sing a verse to each other.”

FRITZ: “One of my best recollections is when they were figuring out what to do for an encore. Jerry, peering over his glasses, goes “Ahhooooooo,” and they launch into ‘Werewolves of London.’ ”

BARROWS: “I hated the encore.”

HERRON: “In the green room after the show, Jerry had a pile of books with him. I sat down and asked what he was reading. ‘Oh, we’re going to Egypt, so I’m reading about the pyramids,’ he said.”

COLWELL: “After the show, I was helping to clean up. I went looking for the Frisbee I’d brought to the gig. [Singer] Donna Jean Godchaux had the Frisbee on her lap, using it to corral marijuana she was rolling into joints. I didn’t have the heart to take it away from her.”

HERRON: “Keith Godchaux, the keyboarist, was passing out on the couch. Donna Jean was sort of propping him up. Bob Weir was bringing in, you know, hot little groupies who were following him around. [Bassist] Phil Lesh was very low key, as was [drummer] Mickey Hart. And [drummer] Bill Kreutzman was a family guy. He wasn’t into the whole, you know, hang-out-and-party routine.”

SHOEMAKER: “The show wraps up around 11, and I spend the entire night breaking down the stage. At one point I’m high on a scaffold taking down some lights, and Phil Lesh and Bob Weir come out on the stage. They’re looking around and I wave down and say, ‘Great show, guys,’ and they wave up and say, ‘Thanks a lot.’ I pushed the last cart into the tractor trailer as the sun was rising.”

HERRON: “It was so much fun that I trailed them for a couple days and ended up in Springfield, Massachusetts, for the show down there. They were like, ‘You want to stick with us for the whole New England tour?’ I worked another show and just sort of ran off for a week.”

SHOEMAKER: “It really was, in many ways, kind of a climax to our four years at Dartmouth and to the friendships that we had forged through our common values and attraction to this music and what it represented.”

WELLER: “It was the first of—I’ve lost count—dozens of times that I saw the Grateful Dead during the next 15, 18 years.”

COLWELL: “May 5, 1978, is an important day on my calendar. I think about the concert every time that day comes along.”

FRITZ: “A classmate of mine recently sent me an email. I hadn’t talked to him since graduation. ‘I’ll never forget what you did for me before the Grateful Dead show,’ he wrote. I was intrigued. And I was thinking, he did say ‘for me,’ not ‘to me,’ right? Later we caught up and he told me: ‘On my way to the show, I ran into you, and you gave me a hit of acid. I’d never done it before. I’d never seen the Grateful Dead before.’ And he said he had the best time. He said that after the show he went into every fraternity and howled the ‘Werewolves of London.’ And then he grabbed his sleeping bag and climbed I-don’t-know-what mountain in the middle of the night, howling all the way up. He said he woke up in the morning in the middle of a Boy Scout camp.”

Where are they now?

Chip Blough (government) is a carpenter and bass player in Richmond, Virginia.

Winslow Colwell (studio art) is an artist in Ripton, Vermont.

Phil Gibbs (economics) is a retired firefighter in Eastford, Connecticut.

Jon Herron (drama and film studies) is a cinematographer in Brooklyn, New York.

Jack Manheimer (history) is a lawyer in Falmouth, Maine.

David Shoemaker (drama) is an education consultant in Milwaukee, Wisconsin.

Peter Weller (geography) is a doctor in Colchester, Vermont.

Ethan Weinstein ’21 is a journalist in Vermont. He writes for VTDigger, and his music writing has been featured in the Los Angeles Review of Books and Aquarium Drunkard.