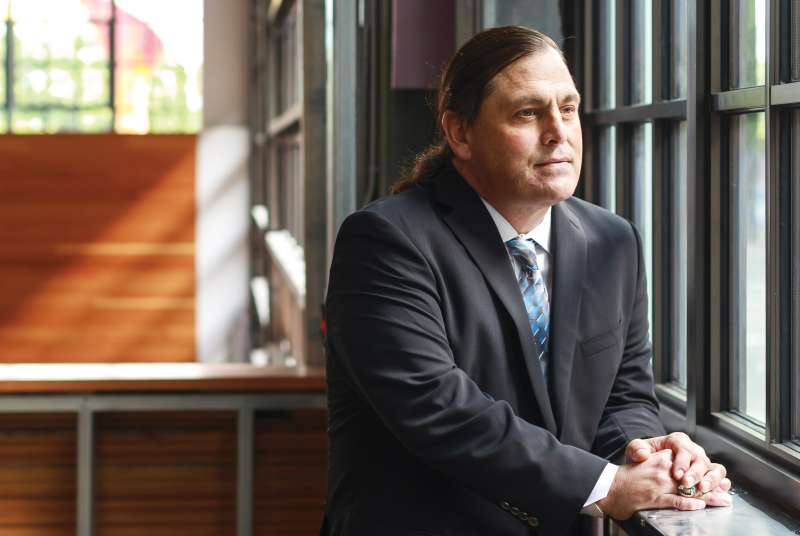 In the late summer of 1985 Wayne Shammel piled most of what he owned into a souped-up, sky-blue Chevelle SS and hurtled from the Flathead Indian reservation in Montana, where he grew up, to Hanover. “It had three deuces, three two-barrel carburetors,” he recalls fondly. “When you really opened it up, it moved. You could see the gas gauge going down.”

Shammel, a hard-charging, solidly built former football jock, now serves as assistant general counsel for Prosper Portland, the Oregon city’s development agency, but he is known nationally as an expert in tribal gaming. After excelling at Dartmouth and Harvard Law, he initially participated in the then-booming Native gaming bonanza in an advice-giving capacity. “The law authorizing Indian casinos was passed when I was at Dartmouth,” he says, referring to the 1988 federal legislation, the Indian Gaming Regulatory Act. “The gaming practice areas at the  firms that hired me as a corporate associate grew, and I had clients involved in all aspects of the boom, the financing, the management.”

After a few years practicing in Denver he went in-house, becoming general counsel of a casino-owning tribe in Roseburg, Oregon. Then he served as general counsel with the Confederated Tribes of the Chehalis Reservation in Washington State.

He acknowledges that his successful and varied career couldn’t have been predicted when he was growing up. “I was crippled as a boy and lost the use of my legs,” he says. “I was determined I was going to stay competitive, I wouldn’t be a nobody. I read all 4,335 books in our little library.” In high school Shammel regained the use of his legs and joined the football team, but he never lost his taste for reading, and his standardized test results drew Dartmouth’s interest. “I was going to go to the state school, but a recruiter from the College visited and convinced me to apply,” he explains.

Soon Shammel found himself driving his hot-rod eastward. “The landscape was so different, so closed in by trees,” he recalls. “When I got to the school I was worried that someone might take my guns, so I strapped them to the underside of my dorm bed. Somehow the campus police heard about them and came to me politely to ask if they could store them for me. I was so happy about that. No one would steal them there, I thought, and I could get them out whenever I wanted to go hunting.”

“My grandmother raised me to be an uber-Indian. The plan was always that I’d take what I learned back into Indian country.”

He kept on hunting as he had always done, but he cut his hair to fit in. “When I went home my grandmother cried, because it was our tradition to cut your hair only when someone important to you passed. You’d bury the braid with that person. ‘Who died?’ she asked. I decided I’d never again cut my hair for any other reason—and I never did.” (When his grandmother died recently, he was one of several to shear off his hair and send a braid with her.)

In Hanover Shammel always had a job: washing dishes at the dining hall, serving tea at Sanborn Library, working as a bouncer at a biker bar in White River Junction, Vermont. “A lot of the kids were tasting their first freedom at Dartmouth, going nuts with it,” he says. “I’d grown up pretty free-range. [Back home] we’d ‘red-lantern’ the train that passed near us by hanging a red light by the tracks, and the engineer would stop the train and take us away for a week-long fishing or hunting trip in the wilderness.”

Shammel majored in English and earned two academic citations, one for a course on Shakespeare. His smarts got him offers from every law school to which he applied. “I was considering going to Stanford, but my brother said, ‘Are you crazy? It’s Harvard,’ ” he says of his decision. He would have done the joint J.D.-M.B.A. program at Harvard, he says, but he couldn’t afford the extra time or tuition that would take, so he settled for studying as much business law as he could. “A visiting professor told me bankruptcy law was the way in to understanding what makes businesses tick, which was good advice,” he says. “I also wanted to learn about the law as it related to Indians, but there wasn’t even a regular course, just a short seminar.”

He took what he learned to Denver, and moved after two years at Faegre & Benson (now Faegre Baker Daniels) to Dorsey & Whitney to help build a strong gaming practice. (“A partner once asked me, ‘How many Native lawyers do we have?’ I said, ‘One, me.’ ”) These were years, he says, when he learned not only about the law but also about money and power: “I saw how the wheels turn.”

But becoming a big-firm corporate attorney had never been the ultimate aim. “My grandmother taught me our language. She raised me to be an uber-Indian. The plan was always that I’d take what I learned back into Indian country,” he says. In 1996, when a client asked him to become general counsel of the Cow Creek Band of the Umpqua Tribe, he said yes.

Drawing on his corporate law background, Shammel helped the tribe use the money its Seven Feathers casino earned to secure financing to redevelop its lands. As a result, the tribe now runs a power station, supplies water to its reservation and the region, and supports a wide range of businesses, including  farms, restaurants, a truck wash and a graphic design studio. “We know the casinos aren’t going to last forever, that redevelopment is important—and there were lots of regulatory and financing hurdles we had to jump over,” he says.

Shammel’s description of the negotiating, networking and lobbying needed to make the 240-acre, $100-million redevelopment happen credits the tribal leadership team in place at the time, but the tribe’s current CEO, Michael Rondeau, says simply, “Wayne delivered what many would say was impossible.”

Although Shammel has had many successes, he makes it a point to talk about his setbacks: “In my personal life there are things I’d do differently. I’ve been divorced twice. I’ve worked to maintain peace with everybody in my world as best I can.” Speaking shortly after spending time with his children, a son and two daughters, and his first grandchild, a boy, he is less the bullish, fast driver and more the reflective angler. “In the movement of fish in the Northwest, the migrations of the birds, you see the climate changing. At this time of your life, you start to think about legacy,” he says. “I’d like for someone to see what we did in Oregon 50 years from now and say, ‘They were thinking of us when they did this.’ ”

Alec Scott is a freelance journalist based in Oakland, California.