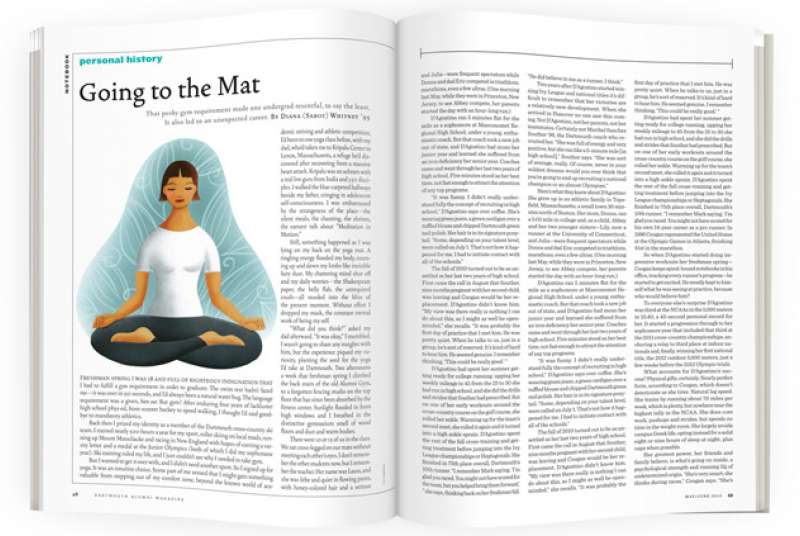 Going to the Mat

That pesky gym requirement made one undergrad resentful, but it led to an unexpected career.
By Diana (Sabot) Whitney ’95 | Sept - Oct 2010

Freshman spring I was 18 and full of righteous indignation that I had to fulfill a gym requirement in order to graduate. The swim test hadn’t fazed me—it was over in 90 seconds, and I’d always been a natural water bug. The language requirement was a given, bien sur. But gym? After enduring four years of lackluster high school phys ed, from scooter hockey to speed walking, I thought I’d said goodbye to mandatory athletics.

Back then I prized my identity as a member of the Dartmouth cross-country ski team. I trained nearly 500 hours a year for my sport, roller skiing on local roads, running up Mount Moosilauke and racing in New England with hopes of earning a varsity letter and a medal at the Junior Olympics (both of which I did my sophomore year). Ski training ruled my life, and I just couldn’t see why I needed to take gym.

But I wanted to get it over with, and I didn’t need another sport. So I signed up for yoga. It was an intuitive choice. Some part of me sensed that I might gain something valuable from stepping out of my comfort zone, beyond the known world of academic striving and athletic competition. I’d been to one yoga class before, with my dad, who’d taken me to Kripalu Center in Lenox, Massachusetts, a refuge he’d discovered after recovering from a massive heart attack. Kripalu was an ashram with a real live guru from India and 350 disciples. I walked the blue-carpeted hallways beside my father, cringing in adolescent self-consciousness. I was embarrassed by the strangeness of the place—the silent meals, the chanting, the shrines, the earnest talk about “Meditation in Motion.”

Still, something happened as I was lying on my back on the yoga mat. A tingling energy flooded my body, coursing up and down my limbs like invisible fairy dust. My chattering mind shut off and my daily worries—the Shakespeare paper, the belly flab, the unrequited crush—all receded into the bliss of the present moment. Without effort I dropped my mask, the constant mental work of being my self.

“What did you think?” asked my dad afterward. “It was okay,” I mumbled. I wasn’t going to share any insights with him, but the experience piqued my curiosity, planting the seed for the yoga I’d take at Dartmouth. Two afternoons a week that freshman spring I climbed the back stairs of the old Alumni Gym, to a forgotten fencing studio on the top floor that has since been absorbed by the fitness center. Sunlight flooded in from high windows and I breathed in the distinctive gymnasium smell of wood floors and dust and warm bodies.

There were 10 or 15 of us in the class. We sat cross-legged on our mats without meeting each other’s eyes. I don’t remember the other students now, but I remember the teacher. Her name was Laura, and she was lithe and quiet in flowing pants, with honey-colored hair and a serious gaze. At the time I thought she was hopelessly grownup, but in hindsight I realize she couldn’t have been more than 30. Absorbed in the bubble of my own experience I never wondered about her life—whether she had a family, another career, if she ran her own yoga studio or taught anywhere else. She existed for me only on Tuesdays and Thursdays from 3 to 4:30 p.m., a rhythmic voice guiding me into the flow of yoga.

Laura taught us how to balance on one leg in tree pose, using our breath to keep steady. Instead of stressed-out college students in sweatpants, we became a forest, then a flock of pigeons, then sleeping turtles curled up on the ground. Every week yoga taught me about transformation—as did creative writing, my eventual major. This was very different from my academic life. I wasn’t trying to achieve anything or impress anybody in yoga class. Yoga was pure time out, and it fueled me for the constant deadlines and challenges of my coursework.

“You are more than just your body,” Laura would say as we lay down for final relaxation in corpse pose, savasana (“death practice”). “You are also energy.” This was a revelation, since I was a self-critical perfectionist who’d struggled with poor body image since junior high. I took a deep inhale then let go, surrendering to gravity.

College is a time of unparalleled receptivity, an openness to experience that is never again so free. Back then “intense” was my favorite word. I used to jump into the Connecticut River the day after ice-out, emerging gasping and exhilarated on the Ledyard dock. Now I’m amazed at how much we crammed into those fertile four years. Not just the classes and the workload (though they were formidable) or the sports and activities, but the powerful friendships and adventures, the ongoing discoveries and connections.

Though it was but a fragment of my Dartmouth experience, that yoga class was such a discovery. My gym requirement got me out of the box and exposed me to an ancient meditative practice that has since become my work. I never dreamed at 18 that I would become a yoga teacher, but somehow my life has closed the circle and I’m now the one at the front of the room, chanting Om. In the past decade I’ve taught yoga to many hundreds of students—from preschoolers to nursing home residents, from college athletes to postpartum mothers. I love the focused flow of the present moment that absorbs me when I teach, helping people release tension in their bodies, the charged stillness that comes over the room like a spell in savasana.

Yoga began as a curiosity, evolved into a hobby and became a calling. Now I can’t imagine my life without it. So I want to thank the Dartmouth officials who mandated a gym requirement—and bow Namaste to my college yoga teacher, wherever she is now.

Diana (Sabot) Whitney is a yoga teacher and freelance writer in Brattleboro, Vermont.