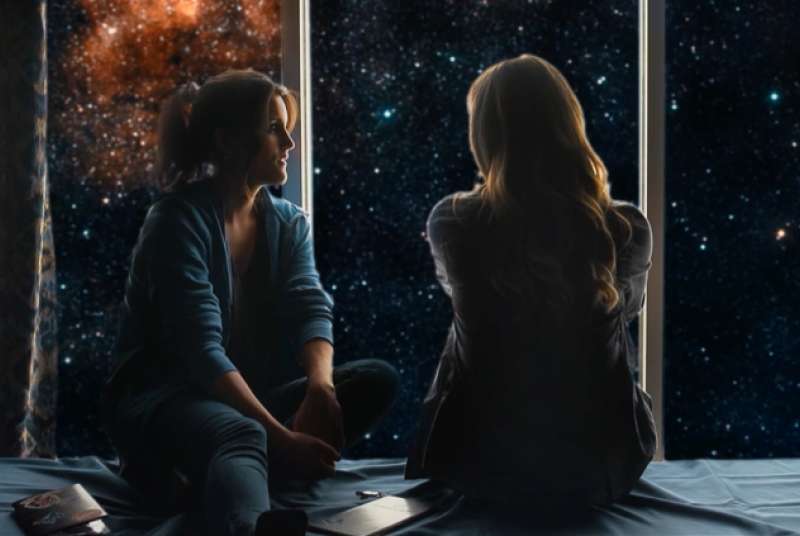 Olivia Baptista ’12 (left, below), Diane Chen ’14 (center) and Amber H.H. Porter ’14 (right) first collaborated as undergrads in Dartmouth’s theater program. The trio recently reunited to found Multihyphenate, a film production company that promotes diversity while eschewing the traditional hierarchy of labor in the entertainment industry. In keeping with the company’s namesake, Baptista, Chen and Porter cover multiple roles behind the scenes and in front of the camera. The first episodes of their new suspense-filled, genre-bending web series, Here We Wait, were released in November. A total of 20 episodes—each averaging seven minutes in length—will be released periodically online in the coming months.

Describe the premise of the show.
Chen: Here We Wait follows the story of eight waitstaff who work at a big restaurant. The restaurant is a front for purgatory. We don’t use any religious terminology in our series, but we denote “Here” as the purgatory restaurant space, “There” as heaven and “Somewhere” as hell. Basically, the show is about the drama surrounding the wait staff and what happens when the system starts to go off-balance.

Where did the idea come from?
Baptista: Diane showed me a few web series that were all high-concept ideas filmed in a very simple way. I thought, “Well, we can do that.” I sat down one day and wrote what eventually became episode two of Here We Wait. Then we expanded it—it was clear we couldn’t keep it simple. It’s a high-concept show that we tried to accomplish in a low-budget setting, which is a really fun challenge. We wanted sci-fi, we wanted female-driven and we wanted character-driven more than story-driven. Grey’s Anatomy and Orphan Black were also big sources of inspiration. 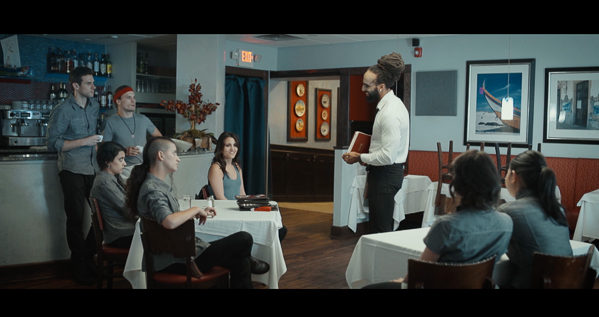 The series takes place in a single setting—can you talk about working on-location in the restaurant?
Baptista: When we went into writing the series we wanted to limit ourselves to one location. We liked that constraint and thought it would make it easier to produce the show. My family owns a restaurant in central Jersey called the Ria Mar. It’s huge—it has a banquet hall, a bar, a few dining rooms, a giant basement and all these nooks and crannies. We had to film entirely overnight because the restaurant was still functioning during the day.

How did the cast and crew manage to stay up all night for shooting?
Baptista: A lot of espresso and a lot of dessert. The restaurant left us plenty of food. It was really good energy on set. 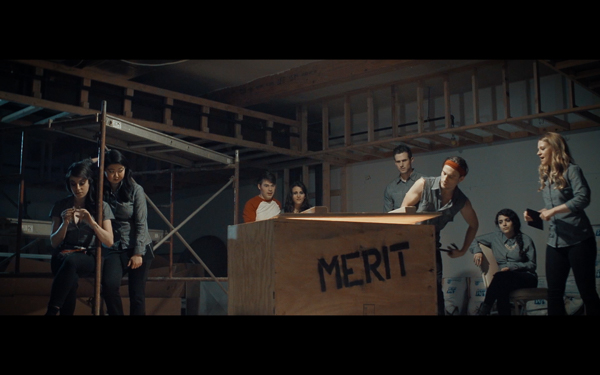 Did you hold open auditions for the show?
Porter: We had a full casting call and received 2,000 submissions for eight roles. It’s an ensemble cast, so our main concern was about the chemistry between the actors. We wanted every individual in the ensemble to “pop” in their own way, to have an “it” factor—if they were on the street, I would have wanted to walk up to them and know more about them. We brought in about 100 people to audition and then took a week to sit with all of them.

Baptista: We also created a wonderfully diverse crew behind the camera.

Porter: Diversity is really important to us—we want to make sure our projects look like the world.

Chen: As a company, we always try to put diversity at the forefront. In my experience, being a queer female filmmaker of color has presented some challenges, mostly in terms of visibility and accessibility, and as an actor, in marketability. I think we’ve seen it as a challenge that we’re more than willing to face, and we really want to be champions of diversity in whatever projects we make. 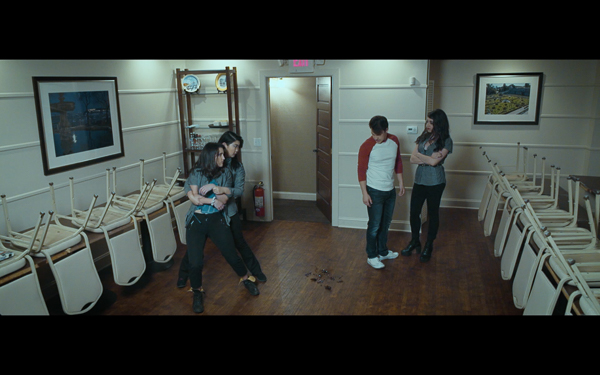 How did your training in Dartmouth’s theater department prepare you all of this?
Chen: The department was great about educating us in a well-rounded fashion—it made us multihyphenates, in a way. As an undergrad I did costume design, I did sound design, I directed and I acted. We also ran WiRED, the 24-hour theater festival. It was engrained in us that if you want to do something, then learn what you need to learn to make it happen.

Porter: We wanted to name the company Multihyphenate after the holistic training we got at Dartmouth. We also look up to Shonda Rhimes ’91 and Mindy Kaling ’01, who are both thoroughly involved in their roles as showrunners. We want to be a part of that legacy. Artists are more effective when they have greater ownership and control over the work that they’re creating.

Why did you decide to develop Here We Wait as a web series instead of a more traditional format, such as a feature-length film or episodic television show?
Chen: Web series is a new format and everyone is trying to figure out exactly what that means. If you think about it, Netflix produces web series—they have original content that is released online, which is really the only definition for a web series. We’re just trying to produce good online content. The best thing about web series is the high level of accessibility—they tend to build a very large international following.

Baptista: We want to appeal to the masses. If you’re on the subway, you can watch an episode of Here We Wait and get your fix. Because the episodes are so short, you can go back and find clues planted throughout the series—you can actually determine the fates of the characters in the first four episodes if you really pay attention. There are tons of Easter eggs in this series, where you’ll watch something on episode 17 and a little thing from episode one is suddenly going to click.

Chen: Digital media is definitely the new frontier. The battle now is how to collaborate with sponsors, because you have to go through alternative avenues to find funding when you’re doing a web series. You don’t have a network that green lights the pilot and gives you all the money and resources to shoot the rest of the series. We have to get really creative about funding, and I think that’s helping web series be a better avenue for media. 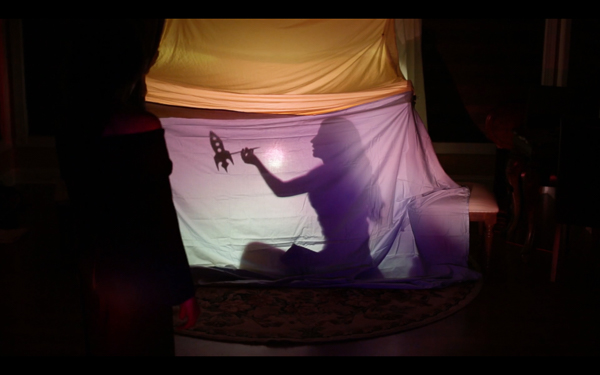 How did you finance the production?
Baptista: We wanted to film one episode to show what the series would be like, so we did the episode “Infinity” with zero money. We made it in a single night. Then we put it up on Kickstarter and ended up raising about $12,000. Any additional funding came through private donations after people saw the show. We also approached businesses where we were filming in small-town Jersey, and locals were very generous with their time and money and with items that we could use on set.

What are you doing to publicize the show?
Baptista: Much of our success has been via word of mouth from family and friends. My brother and one of my dear friends planned a premiere party that resulted in some buzz. I have a publicist who is dedicating some of her time to promoting the show because she saw it and believes in the story, characters and minds behind it.

What are some of the bigger lessons that you’ve learned while producing the show?
Baptista: More than anything, it taught us that there’s more than just the art and the fun of creating. There is a business aspect to this. Learning how to marry the two was a big takeaway.

Porter: We all have ownership over our company’s projects, but we also recognize that we’re each going to play different parts in each production. That’s exciting, because we’re going to grow and understand each other in so many different kinds of roles.

What did you find most surprising about the experience of producing Here We Wait?
Baptista: I don’t think any of us expected it to look this good.

Chen: Oh, Olivia. I knew it would be this good!

This interview has been edited for clarity and length. To view more episodes of the web series, visit www.herewewait.com (Photos courtesy Multihyphenate Productions)