A light brown wisp, so faint I thought I imagined it, rose from thick pine and cedar a mile from Banner Mountain lookout, where I was stationed this past fire season.

I peered through my binoculars. The plume could be smoke from an illegal brush pile, it could be dust, or it could be an actual vegetation fire.

I’d just started my morning shift and done the first circuit around the 60-foot fire tower’s catwalk. The mountains were already hazy with smoke from megafires north and south of my Northern California jurisdiction. When the air itself lies thick and heavy, it’s difficult to identify the particular sheen that distinguishes smoke from clouds.

I went inside the tower’s cab to the Osborne Fire Finder to sight the possible smoke. When I swiveled the alidade to catch the wisp in the crosshairs, there was nothing. I stepped back and raised my binoculars again. Relieved I wouldn’t have to report such an uncertain sighting, I still noted in the tower log the area to keep an eye on.

After another rotation around the tower, I saw it again. The smoke puffed up from the trees, then faded. Puff and fade. I sighted it with the Osborne’s crosshairs this time. The brown color, the inconsistent column—I wasn’t convinced what I saw was actual smoke. But during my training shifts my supervisor had emphasized erring on the side of calling in a false smoke rather than letting a fire burn unchecked. My competitive side perked up, too. I didn’t want my counterpart on Mount Howell to beat me to a call.

I picked up the radio and took a steadying breath. “Grass Valley, Banner Mountain smoke report.”

“Banner Mountain, go ahead.” The dispatcher’s tone was flat, clipped. I hoped mine was as emotionless. When I’d delivered paperwork to Station 30 the next town over, I’d heard our frequency’s radio chatter from loudspeakers over the doors. The firefighters could hear my voice in every hallway and bathroom. If I bungled my report, they’d all believe the Banner Mountain lookout had no idea what she was doing. I wiped slick palms on my shorts to dry them.

“Grass Valley, we have a light, intermittent column at 235 degrees, one mile, near Idaho-Maryland Road and Banner Mountain Road,” I reported.

I listened to the dispatcher summon engines, water tenders, and the battalion chief. I heard their sirens as they approached. The column grew thicker.

I let my binoculars drop. How many firefighters’ time had I wasted? It was September, deep into my season as a lookout for Cal Fire, as the state’s department of forestry and fire protection is called. Drawn by a years-long fascination with wildland fire, I found my way to the Nevada-Yuba-Placer Unit towers to experience lookout work in a way I couldn’t through reading. Though motivated by a desire to write fire stories with deeper authenticity, I also wanted to be a competent lookout, not a liability. 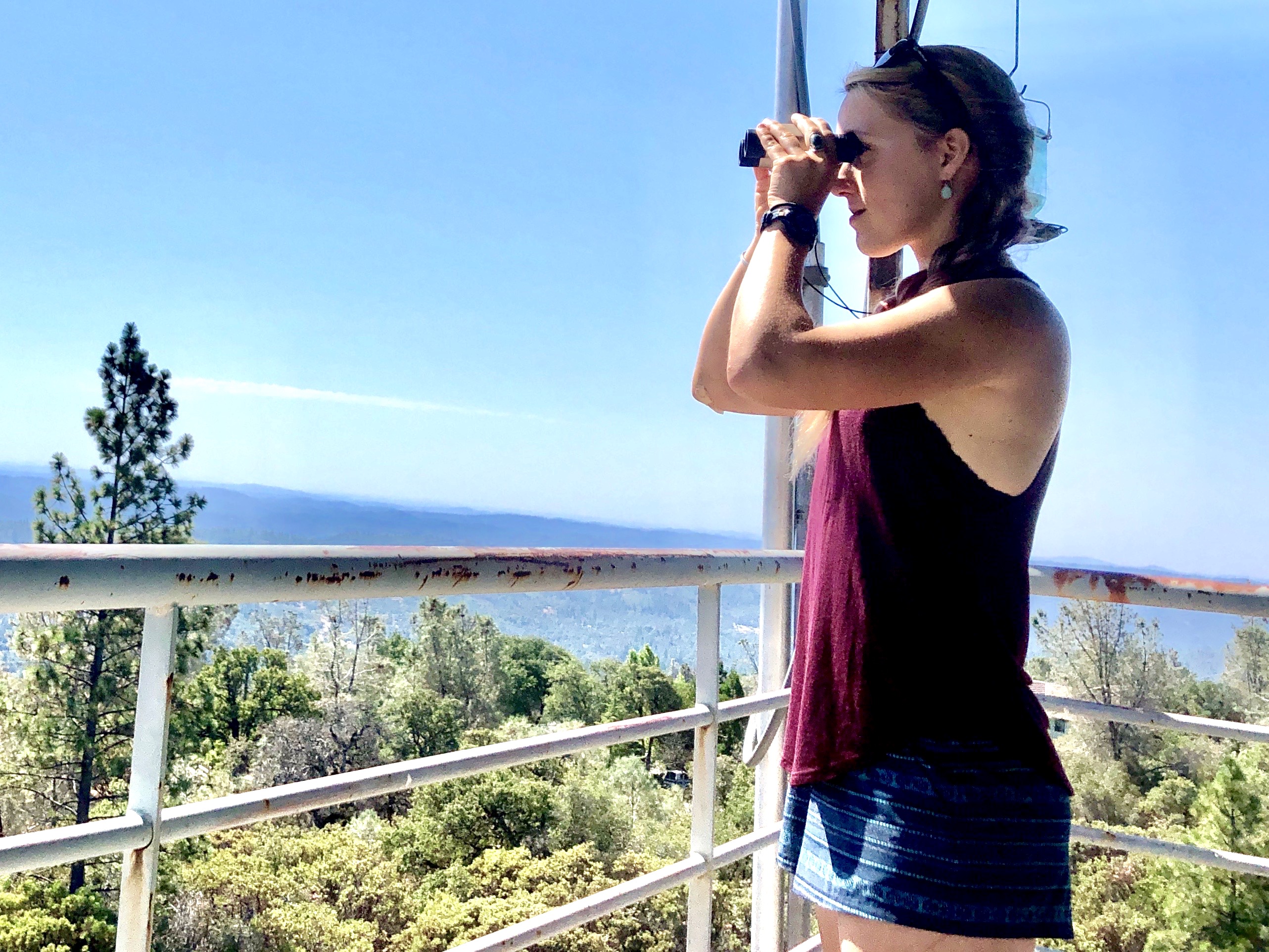 The author at work. Photo courtesy of Charlotte Gross.

I thought I knew by then what smoke looked like. I’d learned that vehicle fires spouted greasy, black columns. Smoke from structure fires hung dark, too. Vegetation fires usually started as pale gray plumes that darkened when sparks jumped from the underbrush and caught in thick trees. I’d learned to ignore dust from the quarry and that a black smudge south of Mount Howell meant a train was chugging through. And yet, when you’re conditioned to look for smoke, it’s easy to see smoke where there is none.

Cal Fire’s zero tolerance for fires surprised me at first. My introduction to the world of wildland fire came through reading and from environmental studies courses at Dartmouth. I’d read that federal departments, at least, were retreating from the full fire suppression tactics that have starved ecosystems of “good fire” and led to dangerous fuel buildup. Letting some fires burn, and intentionally setting others, is part of preventing the kind of conflagrations whose smoke blanketed the West last summer and fall.

I had asked my supervisor if the state’s response to fires differed from that of the U.S. Forest Service. “The feds say, ‘Let it burn,’ ” at least under certain conditions, he replied. “But Cal Fire says, ‘We have people here!’ ” More than ever, fire-dependent ecosystems, including the land I watched over, lie at the wildland-urban interface. People have moved too deep into forests to let fires grow when Cal Fire resources can contain them. The prevailing attitude is that “let it burn”—with our current climate conditions, fuel loads, and human presence—means inviting disaster.

This paradox of wildland fire—its necessity and its destructive potential—drew me. Compelled by humanity’s complex relationship to fire and the visual beauty of flames, I created a graphic novel as my undergraduate thesis. The main character, a fire tower lookout named Sage, takes action when she sees the need for fire in the landscape. She does the opposite of what I did and what she is supposed to do as a lookout. She sets the forest on fire, but it gets out of control, her own tower burns, and a smokejumper dies.

On Banner Mountain, I did report a few small fires, but I never was tempted to set the hills ablaze. Five years have passed since my thesis advisor told me I needed to spend time in a tower in order to write a lookout’s experience from the inside. I found quieter days than those I invented for Sage. I spent 90 percent of each shift observing the landscape, learning the names of ridgelines, distances to landmarks, and how the world shifts in the changing light. I watched the turkey vultures. I wrote about it all. Sitting for hours in stillness, I learned to read the land—and the smoke.

Charlotte Gross, who has an M.F.A. in creative writing from the University of New Hampshire, now works as a ski patroller and instructor in Truckee, California.