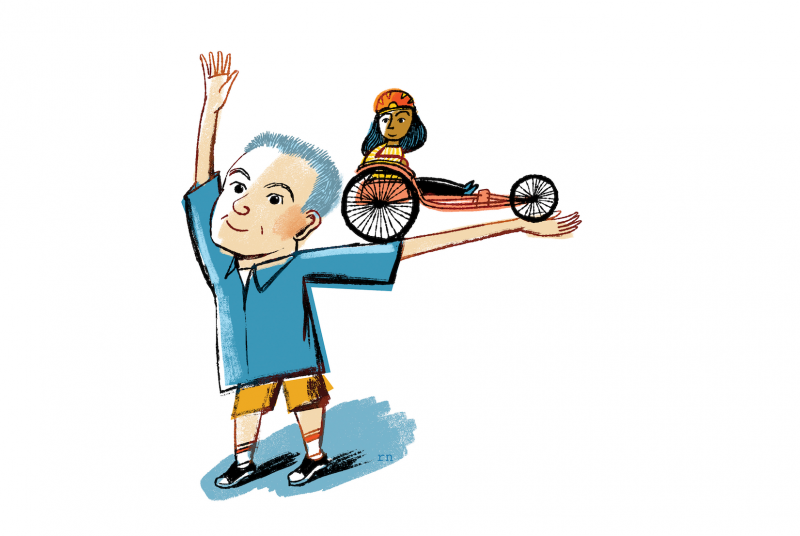 Get in the game. That might be a good motto for Walsh, president and founder of Adaptive Sports New England. Six years ago he founded the Quincy, Massachusetts, nonprofit to help disabled children participate in sports such as track, swimming, sailing, and skiing.

Adaptive Sports serves several hundred children in the Boston area and partners with high school athletic associations and YMCAs. “The intensity of the work we do with kids is high,” says Walsh. “For the most part, these kids don’t have the opportunity to play, and that isn’t right.” Only one in five students with visual or mobility impairments play sports, according to the former Paralympian, compared to 60 percent of children without impairments. “It’s not just a competitive disadvantage,” he says. “This is a big social justice and health issue.”

Walsh is legally blind due to Stargardt disease, an inherited degenerative disorder of the retinas. “My central vision is pretty much lost,” says the former Dartmouth cross-country skier. “I have a dead spot in my vision you could drive a Mack truck through.”

Walsh’s work allows him to witness moments of inspiration. He recalls a girl who, after losing the use of her legs, refused to push her own wheelchair. She’d given up trying. When a swim teacher first worked with her, she could not swim, much less float. Thanks to the efforts of Adaptive Sports, the girl now swims laps and gets in and out of the pool on her own. “Those are enormous accomplishments,” says the longtime managing director of Paralympics for the U.S. Olympic Committee. “It is just super-heartwarming to see.”

A psychology major, Walsh also organizes wheelchair basketball games in which abled and disabled athletes compete with and against each other—all of them in wheelchairs. “Once the kids are in wheelchairs, it’s difficult to distinguish who has or doesn’t have mobility impairments,” he says.