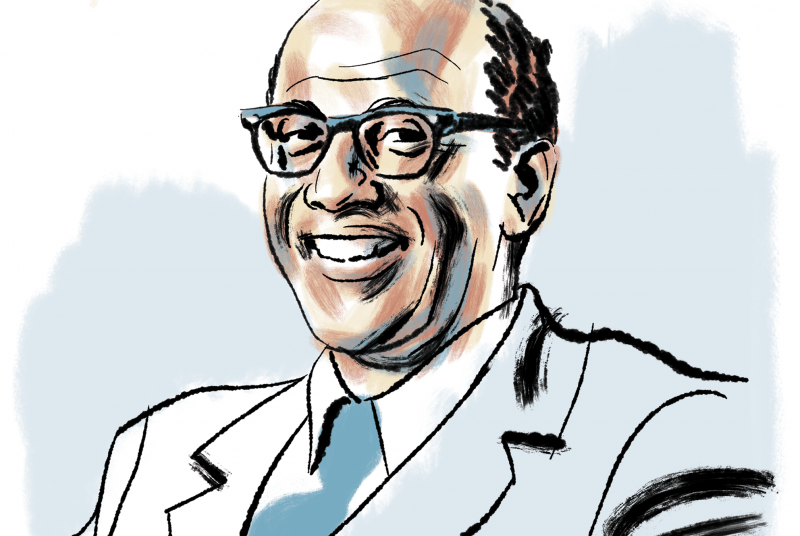 Playwright and director Errol Hill inspired budding actors and playwrights as a drama department professor for 21 years from 1968 to 1989. His peers regarded the Trinidad native as a preeminent expert on African American theater, and he founded one of the first theater companies in the Caribbean. He died at 82 in 2003. Here are some notable moments from his career.

In the Beginning
Hill’s love of acting began when his mother had him recite Bible verses every day. Cast as the lead in a high school play, he rose from his sick bed to perform on opening night.

Role Reversal
Before earning three degrees from Yale, he graduated from London’s Royal Academy of Dramatic Art and had to apply whiteface makeup to perform with an all-white cast. Later, in a play about the American South, it amused him that a white student cast as his mother put on blackface. In 1968 Hill played Othello at Dartmouth.

He Said It
Hill’s first summer at Dartmouth was “wonderful,” he wrote in personal notes, but 1969 was “traumatic” due to Vietnam War-era upheavals. Plus, though he knew little about African American theater, he had to teach the subject. “With practically no preparation or previous knowledge, being the only black professor at Dartmouth, I had to offer a course on the Afro-American theater. It must have been terrible,” he recalled.

The Write Stuff
Hill produced or directed 120 plays. He wrote 11 plays and authored or edited 15 books. At Dartmouth he directed 33 productions, including his play, Man Better Man, a calypso musical about a lovelorn man who uses voodoo to win a woman’s affection.

Peacemaker
As liaison between black students and administrators, Hill’s cool head helped keep the peace in 1969 when protesters barricaded themselves in the African American house when controversial racial theorist William Shockley spoke on campus. “I was the only person they would allow to come in and talk with them,” Hill said.

Before Oscar
Meryl Streep, a 1970 exchange student, took his playwriting class and penned the one-act Chameleon, which is in Rauner Library.

A Prof’s Advice
“Keep life simple. Avoid too many acquisitions. [Old] age comes quickly,” wrote Hill in notes for an alumni club speech. Looking back on his life, he said, “I have learned to pose questions, consider alternatives, leave answers to individuals.”