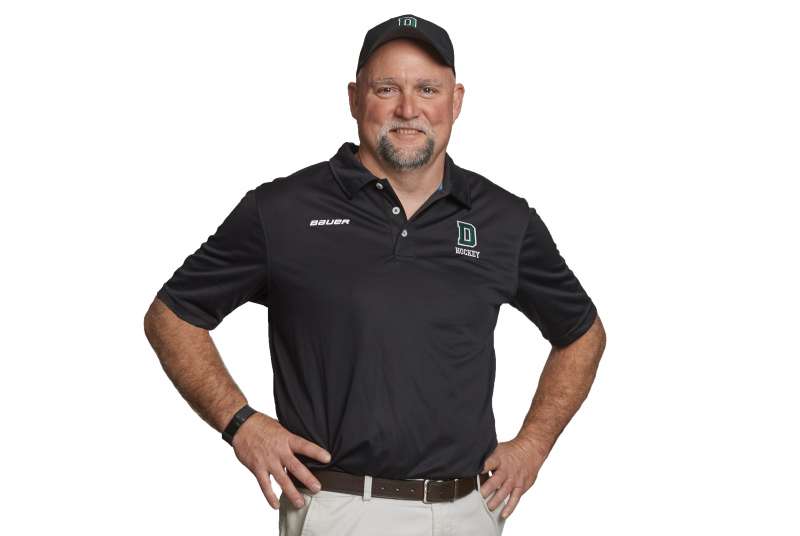 Describe your job.
I do everything from cleaning the glass to taking care of the ice. I spend a lot of time working on the ice, leveling it, taking depth checks. We like to run it thin, between an inch to an inch-and-a-quarter.

Why?
Thinner ice is faster ice, and that’s a home field advantage for us. Our ice is also among the coldest in the league, which makes it hard. When you go to a rink that’s got soft ice it takes the edge away from us and gives it to the home team.

Is it difficult to drive a Zamboni?
You can learn in a couple of weeks. But to really learn, it takes a few years. To learn where the high spots are on the ice. To learn the driving pattern around the ice. You try not to leave any “bananas” out there, those curved, missed spots, especially during games.

When fans toss tennis balls on the ice during the Princeton game each year, are you one of the folks who picks them all up?
Yes. We plan ahead. We have these little pushers that we use ready to go, and we line up some student help. Yeah, they throw some tennis balls. I had an orange go right by my head one year. I’m glad it didn’t hit me. Still, since I do women’s games now I usually try to also put in for the men’s Princeton game because that’s fun.

An orange?
People throw out all kinds of things. Lots of pennies and change. Sodas and chickens—not live—and steaks. We’ve had fish out there on Princeton night.

Have you ever crashed the Zamboni?
Not really. But we’ve all banged the boards before.

How does your Zamboni work compare to driving a car in winter?
I feel safer on the roads in ice and snow than I did before I drove the ’Boni. I drive on ice all day, so I feel more comfortable driving in bad weather.

Do you ever get comments about the ice from opposing teams?
Jerry York, head coach at Boston College, once said to me, “This is great ice.” He’s won more than 1,000 games and probably been on every sheet in the country. That meant a lot.