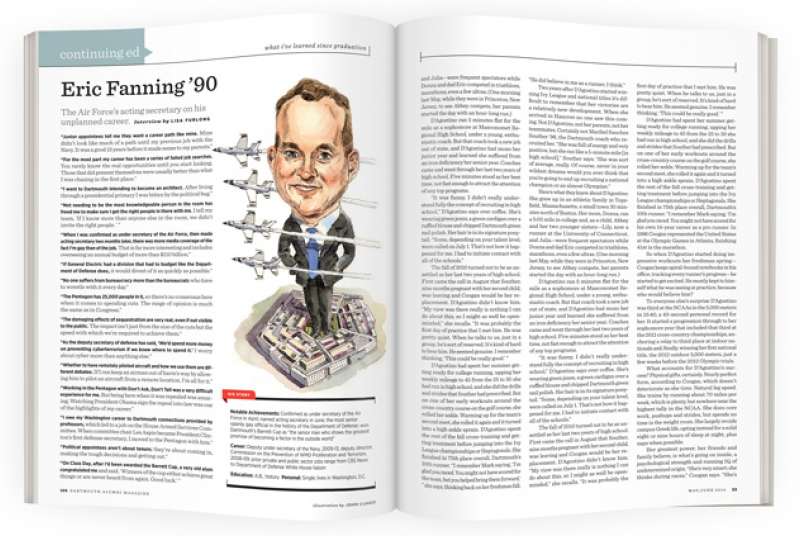 Notable Achievements: Confirmed as under secretary of the Air Force in April; named acting secretary in June; the most senior openly gay official in the history of the Department of Defense; won Dartmouth’s Barrett Cup as “the senior man who shows the greatest promise of becoming a factor in the outside world”

Career: Deputy under secretary of the Navy, 2009-13; deputy director, Commission on the Prevention of WMD Proliferation and Terrorism, 2008-09; prior private and public sector jobs range from CBS News to Department of Defense White House liaison

“Junior appointees tell me they want a career path like mine. Mine didn’t look like much of a path until my previous job with the Navy. It was a good 15 years before it made sense to my parents.”

“For the most part my career has been a series of failed job searches. You rarely know the real opportunities until you start looking. Those that did present themselves were usually better than what I was chasing in the first place.”

“I went to Dartmouth intending to become an architect. After living through a presidential primary I was bitten by the political bug.”

“When I was confirmed as under secretary of the Air Force, then made acting secretary two months later, there was more media coverage of the fact I’m gay than of the job. That is far more interesting and includes overseeing an annual budget of more than $110 billion.”

“If General Electric had a division that had to budget like the Department of Defense does, it would divest of it as quickly as possible.”

“No one suffers from bureaucracy more than the bureaucrats who have to wrestle with it every day.”

“The Pentagon has 25,000 people in it, so there’s no consensus here when it comes to spending cuts. The range of opinion is much the same as in Congress.”

“The damaging effects of sequestration are very real, even if not visible to the public. The impact isn’t just from the size of the cuts but the speed with which we’re required to achieve them.”

“As the deputy secretary of defense has said, ‘We’d spend more money on preventing cyber terrorism if we knew where to spend it.’ I worry about cyber more than anything else.”

“Whether to have remotely piloted aircraft and how we use them are different debates. If I can keep an airman out of harm’s way by allowing him to pilot an aircraft from a remote location, I’m all for it.”

“Working in the Pentagon with Don’t Ask, Don’t Tell was a very difficult experience for me. But being here when it was repealed was amazing. Watching President Obama sign the repeal into law was one of the highlights of my career.”

“I owe my Washington career to Dartmouth connections provided by professors, which led to a job on the House Armed Services Committee. When committee chair Les Aspin became President Clinton’s first defense secretary, I moved to the Pentagon with him.”

“Political appointees aren’t about tenure; they’re about coming in, making the tough decisions and getting out.”

“On Class Day, after I’d been awarded the Barrett Cup, a very old alum congratulated me and said, ‘Winners of the cup either achieve great things or are never heard from again. Good luck.’ ’’