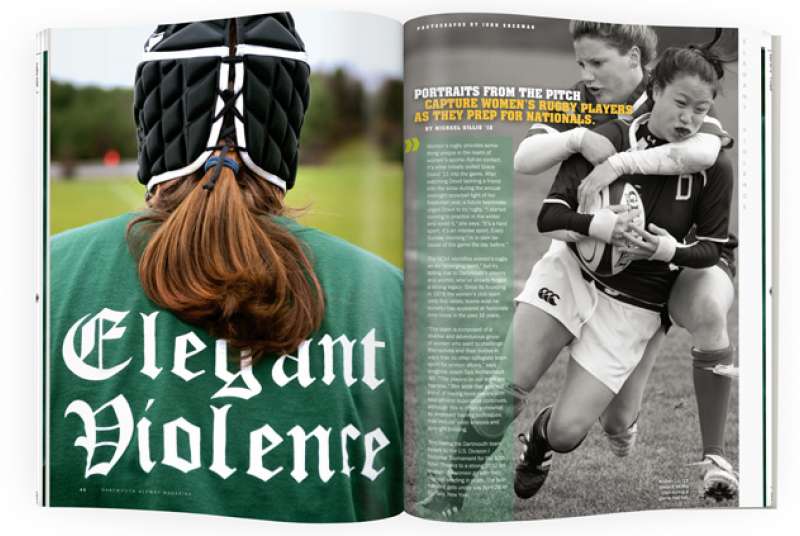 Portraits from the pitch capture women’s rugby players as they prep for nationals. (Includes photo gallery)
Michael Gillis ’12 | May - June 2011

Women’s rugby provides something unique in the realm of women’s sports—full-on contact. It’s what initially pulled Grace Dowd ’11 into the game. After watching Dowd tackling a friend into the snow during the annual midnight snowball fight of her freshman year, a future teammate urged Dowd to try rugby. “I started coming to practice in the winter and loved it,” she says. “It’s a hard sport, it’s an intense sport. Every Sunday morning I’m in pain because of the game the day before.”

The NCAA identifies women’s rugby as an “emerging sport,” but try telling that to Dartmouth’s players and alumni, who’ve already forged a strong legacy: Since its founding in 1978 the women’s club team (only five varsity teams exist nationally) has appeared at Nationals nine times in the past 16 years.

“The team is composed of a diverse and adventurous group of women who want to challenge themselves and their bodies in ways that no other collegiate team sport for women allows,” says longtime coach Deb Archambault ’85. “The players on our team are fearless.” She adds that a recent trend of having more players with less athletic experience continues, although this is offset somewhat by improved training techniques that include video analysis and strength training.

This spring the Dartmouth team heads to the U.S. Division I National Tournament for the 10th time. Thanks to a strong 2010 fall season the women go with their highest seeding in years. The tournament gets under way April 28 in Buffalo, New York.­­­

Ilda Bajraktari ’11
Scrumhalf
Biology
Worcester, Massachusetts
“I have never worked as hard as I do during a rugby game. You push yourself until you have nothing left to give. I like that kind of strength. At the same time there’s a very fun, encouraging personality to the sport. There’s no animosity between the teams. Everything is left on the field.”

Grace Dowd ’11
Prop
Sociology
Birmingham, Alabama
“We’re really proud of being strong women. Growing up we all read the same books, with amazing female characters who were our heroes when we were 12. It made me really proud to learn my teammates have the same values.”

Ashley Afranie-Sakyi ’13
Center
Undeclared
Manassas, Virginia
“A lot of women think, ‘I don’t want to play rugby because of the contact.’ If you learn how to do it right you tackle someone to the ground, get up and think, ‘That was nothing.’ It’s great to see what your body can do.”

Vanessa Mercado ’12
8-man/Lock
Spanish
Dinuba, California
“When you’re in the game you don’t think of getting hurt or getting stepped on or hurting another player. It’s about doing anything you can for your teammates, and I don’t know that I’ve ever felt that way in another sport.”

Melanie Pastuck ’11
Flanker/Lock
Biology/Philosophy
Long Valley, New Jersey
“When I finally got to play I ended my first game hearing my collarbone crack. It was a total fluke, but it got me thinking about my relation to the team and dedicating myself to the sport, because I had so much fun—prior to breaking my collarbone.”

Kristen Liu ’11
Fullback/Wing
Geography
New York City
“I played basketball back in the day and used to foul out of every single game. In high school I played in a coed soccer league and I was known as the girl who was really aggressive. When I started playing rugby, it was exciting to not be penalized for that.”