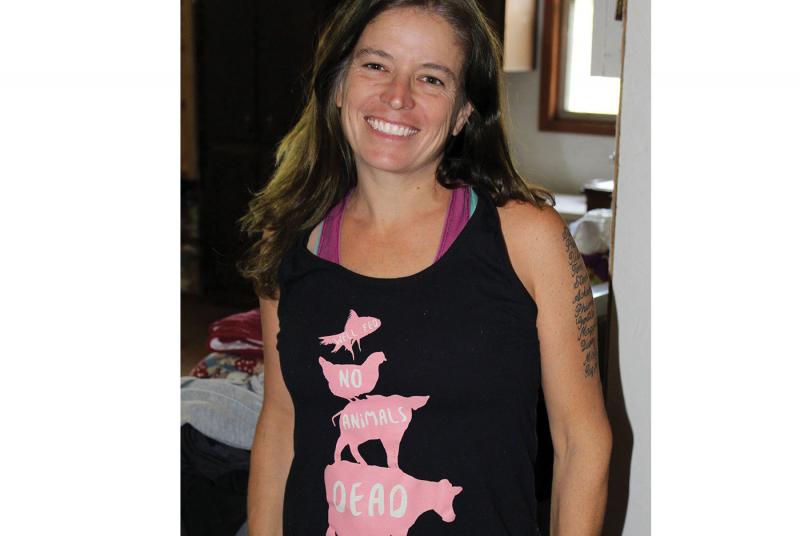 “There’s not much in the way of weekends or vacations,” says Abram of her work tending about 150 creatures that live at Another Chance Ranch, her nonprofit domestic animal sanctuary in Saint Augustine, Florida. She has run the place since 2015 with her father, retired physician Stephen Abram ’66. “We’re a true sanctuary. We take in animals for the rest of their lives, whether they’re seniors or disabled or just falling through the cracks.”

The 40-acre ranch is home to about 80 birds (mostly chickens and ducks), 20 cats, and 30 dogs. “Everybody’s got names,” Abram notes. Other residents include pigs, goats, sheep, donkeys, a mustang, and two giant African sulcata tortoises. One of the ranch’s earliest adoptees, a Great Dane mix named Auggie with only three functional legs, came from a no-kill shelter in town. “He was sort of a mess—his cheeks were just like nubbins,” says Abram. “But he was such a nice old guy I had to spring him.” Under her care, Auggie survived for nearly five years.

Abram, who, like her father, majored in environmental biology, rode with the equestrian team at Dartmouth and served as captain her senior year. “In my fairyland world, humans would not exploit animals anymore in any way,” she says.

Feeding the animals costs about $20,000 annually. A vegan dog food company, V-dog, contributes another $10,000 worth of food by charging only for the shipping of its damaged packages. All animals on the ranch, except cats, eat a vegan diet. One day Abram found herself feeding the entire menagerie alone, a job she usually shares with her father and both of their spouses. “I remember laughing, thinking I had portioned out 150 bowls of food,” she says. “It was crazy how many portions.”