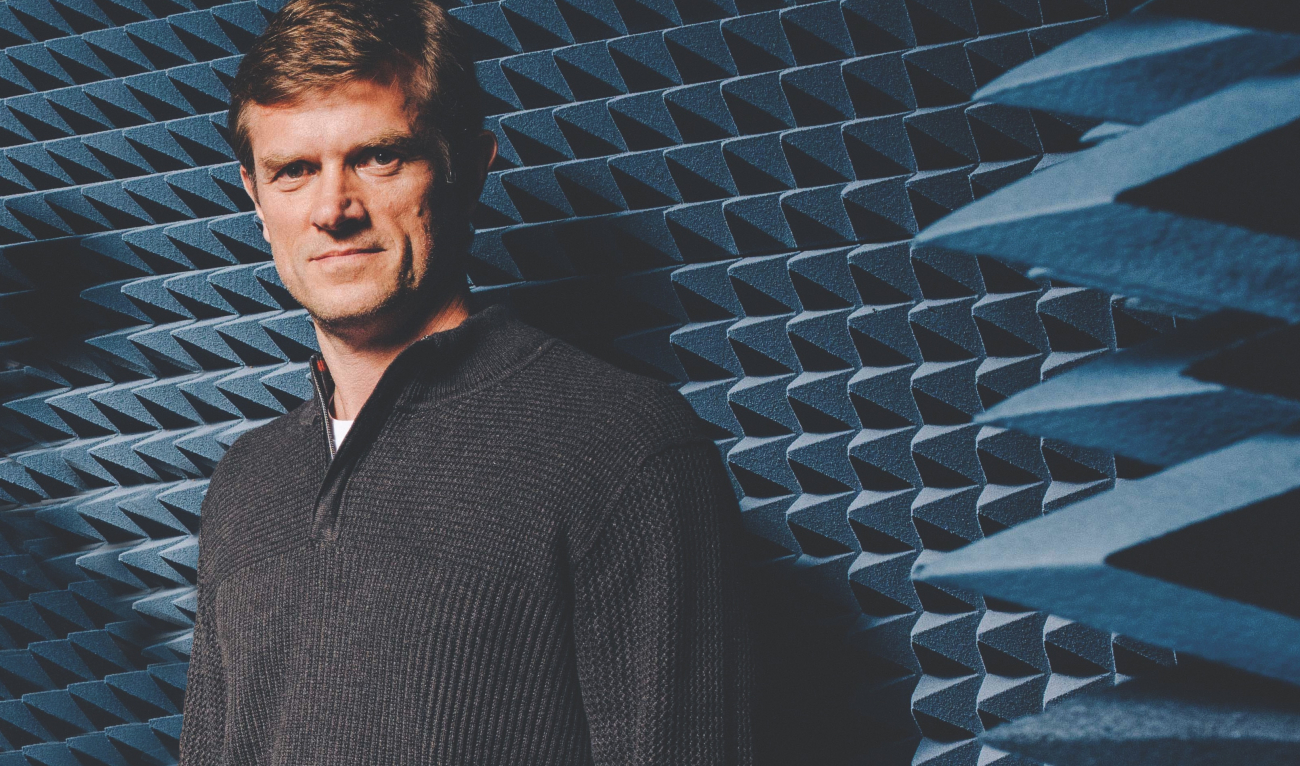 Eye On the Sky

The New York Yankees and the Tampa Bay Rays were just minutes into the first inning of a game last September when the second base umpire pointed into the air and brought the game to a halt. Barely visible against the twilight sky was a small recreational drone, hovering over the field. The players hustled off the field until the unmanned craft left. It was the third drone-related stoppage of the season.

For the players, visits from drones are a harmless nuisance. But for Eben Frankenberg, these incidents are harbingers of a dark future. If those drones had been used in an attack and equipped with explosives instead of cameras, there is little that could have been done to stop them. Things would be even worse in a stadium filled with thousands of spectators who aren’t able to seek cover quickly. By the time the toaster-size drones are close enough for a human to see, it’s already too late. It’s the kind of scenario that keeps Frankenberg up at night.

But he has a solution.

Frankenberg is the president, CEO, and cofounder of Echodyne in Bellevue, Washington, which builds advanced radar systems for the age of autonomous machines. The company has developed a new type of sensor that can detect recreational drones and other small objects from a mile away at any time of day and in any kind of weather. When Echodyne’s radar locates an object moving in its field of view, the user can track it on a satellite image map that also provides real-time data on the object, such as its speed, altitude, and size. 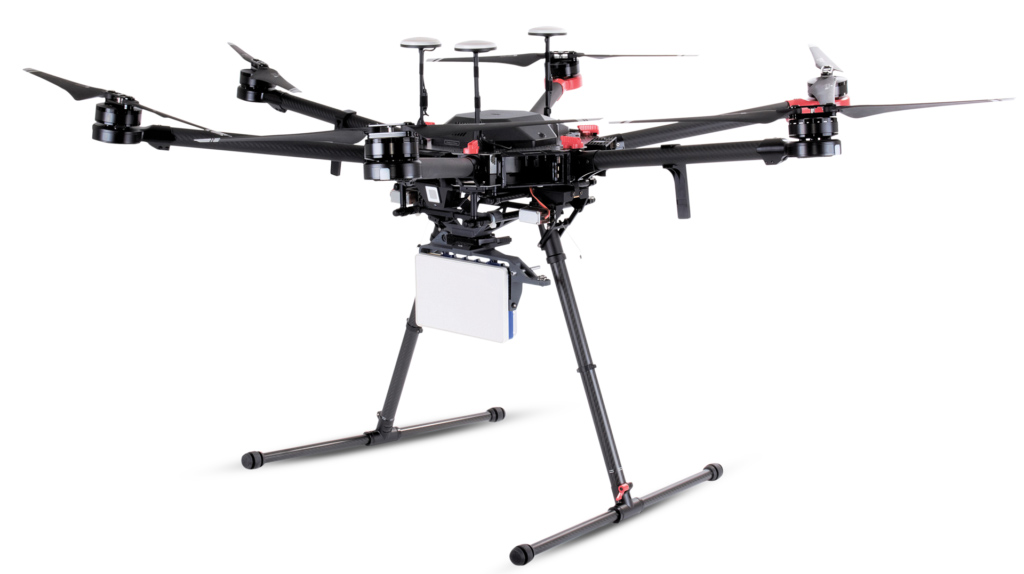 The radar is as capable as systems that cost hundreds of thousands of dollars. Through some technological wizardry, Frankenberg and his team have managed to lop a zero off the price tag. The world is on the cusp of a robotics revolution where drones and self-driving cars will become part of everyday life, but first they need a way to sense the world, and the world needs a way to sense them. Cameras work well in some situations, but they’re easily fooled and don’t work well in many environments. Frankenberg sees radar as a natural solution for protecting people, buildings, and other critical infrastructure from benign and malicious automatons alike.

“Radars are often viewed as this very esoteric sensor,” he says. “But with this move toward autonomous systems, radar has the opportunity to become very important.”

Radar works by emitting a pulse of radio waves and then listening for its echo. Based on what that echo sounds like, it’s possible to tell how far away an object is, how fast it’s moving, and even what it is made of. Radars are great for detecting things that are too small, far, or concealed to see with a camera or the naked eye. Radars have been around since 1935, but high-performance systems typically have been too expensive to use for anything other than specialized applications. At Echodyne, Frankenberg hopes to change that.

Developing advanced radar systems is a somewhat unlikely career for Frankenberg. The earth science major earned a master’s at Stanford in geophysics before starting a career in the oil industry. He cut his teeth at Amoco, where he became acquainted with the power of remote sensing in his oil exploration work and discovered a love for business and project management. When the oil industry went through a downturn, Frankenberg left in 1995 to help Brent Frei ’88, Th’89, his sophomore roommate, start a software company called Onyx—even though Frankenberg had no experience with software development.

“Whatever Eben’s applying himself to, he does it exceptionally well,” says Frei, who now runs an agriculture automation company called TerraClear. “It was clear to everyone that he’d be successful at whatever he set his mind to, and he was critical to our long-term success.”

After a decade at Onyx, Frankenberg left to join Intellectual Ventures, an eclectic investment firm where his talent to move seamlessly across industries flourished. He helped start companies in industries ranging from cybersecurity to nuclear power before leaving in 2014 to cofound Echodyne and work fulltime on building better radar. “Echodyne was the fourth company that I worked on spinning out of Intellectual Ventures, and I really liked the mission,” Frankenberg says. “It’s very similar to the geophysics work I did, except it uses radio waves instead of soundwaves.”

Echodyne’s flagship system can fit comfortably inside a small pizza box and costs about a tenth of the price of a comparable high-performance radar, which can easily run in the hundreds of thousands of dollars. The secret, says Frankenberg, is metamaterials. These are substances whose structures have been engineered to interact with radio waves in ways that would never occur naturally. By changing the shape of a material at an atomic level, scientists are able to force radio waves to travel along certain paths like alleys in a bowling lane or limit the range of frequencies that can be sent and received like a mesh filter. At Echodyne Frankenberg and his team used metamaterials to forgo the thousands of expensive antennas in a conventional radar, whose electronics might cost upward of $100 apiece. Echodyne’s system achieves the same radar capabilities with antennas that cost just a few cents each because they’re controlled through the structure of the material, rather than with a bunch of expensive electronics. “They’re super, super simple,” says Frankenberg.

It didn’t take long for Echodyne’s technology to attract attention. Frankenberg met Bill Gates while working at Intellectual Ventures, and the tech titan has participated in three investment rounds in Echodyne. So far the company has raised a total of $70 million. The company also quickly attracted interest from government and industry organizations looking to protect their assets. Today Echodyne’s radar systems have been installed along hundreds of miles of the U.S.-Mexico border and around U.S. Defense Department and other federal facilities, oil refineries, and stadiums.

“Security and defense are some of the most compelling-use cases that we’re addressing right now,” says Frankenberg. He says companies and government agencies are particularly concerned about the emerging threat from drones, which are difficult to detect and respond to with cameras and conventional equipment. “Even if you know that there’s a drone out in front of you within your line of sight, it is very hard to find it if it’s beyond a few hundred meters away,” he says. “Radar is far and away the best solution for this.”

Defending critical infrastructure from attacks is just one application for Echodyne’s radar system, says Frankenberg. He also sees it as a fundamental enabler of the robot revolution, useful in self-driving cars and autonomous drones used for deliveries. Frankenberg says he is constantly surprised by the creative ways that Echodyne’s customers use their radars. Last winter, for instance, a company in Europe deployed the radar in the Alps and successfully used it for early avalanche detection to protect cars on treacherous mountain passes. He says Echodyne has also been contacted by companies that are interested in using the system for everything from navigating the ocean to exploring outer space. “It’s cool,” says Frankenberg. “You can do all kinds of amazing things with radar and automation.”

DANIEL OBERHAUS is a staff writer at Wired. He profiled Kevin Peter Hand ’97 in our September/October 2020 issue.