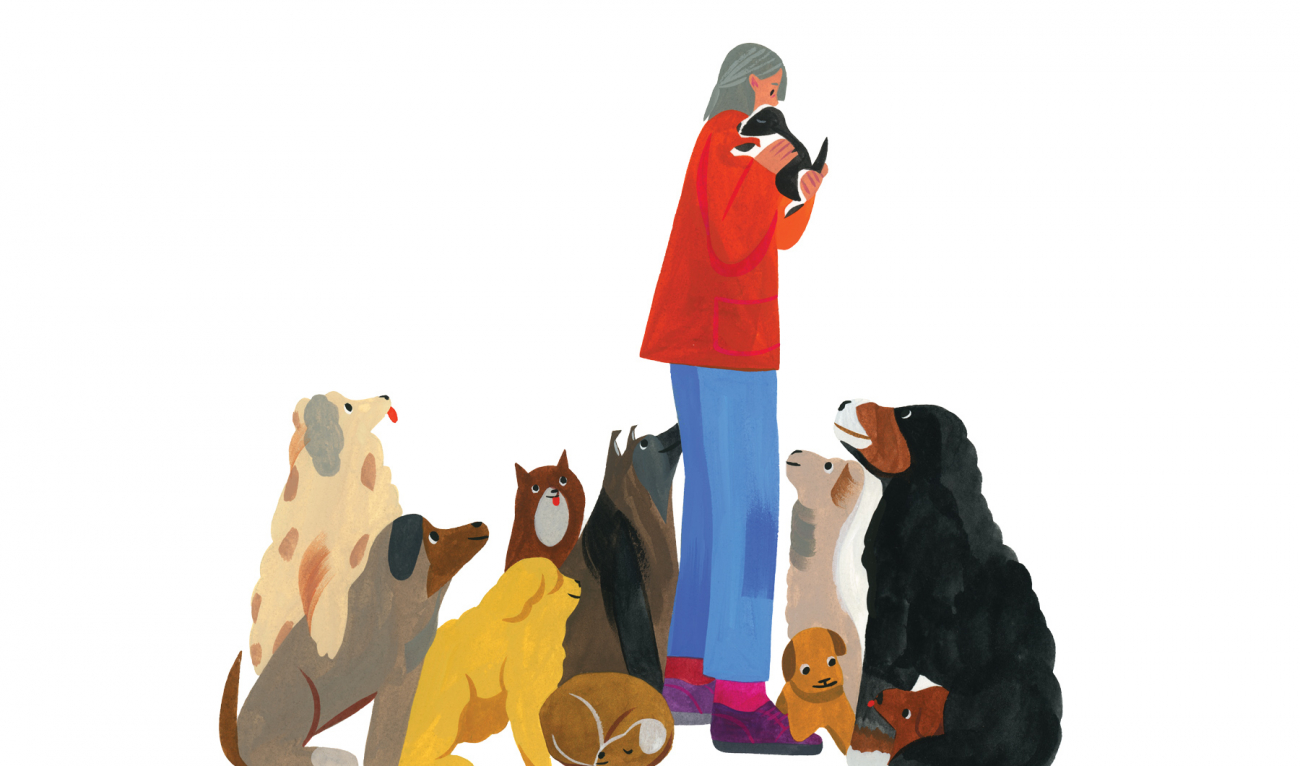 It’s shocking how quickly it can feel normal to have 10 dogs living in your house.

For nearly a decade my family has been taking in mama rescue dogs and their litters. More often than not, when you sit down at our house, you’ll soon find your lap brimming with snuggly puppies who gaze into your eyes like they’ve known you forever.

If you’re like most folks, you’re now asking: “So, you take them in and love them—and then you give them away? What is wrong with your heart that you can actually do that?”

In 2012, when our daughters were 15 and 12, my husband, Tom ’84, and I took in two 8-week-old rescue puppies. One of our dogs had died, and since we weren’t ready to “replace” our girl, somebody suggested that fostering puppies would give us an emotional boost. We worried that we  might get too attached, which prompted my one request, “Give us puppies we won’t like!” Newsflash: A big-dog family can adore a tiny Boston terrier mix. Two hilarious weeks later we were all converts, and those two dear pups went to their new families. We missed them, so we took in another foster puppy. Then another.

Each time I witnessed with delight the way our pack—four humans, plus two dogs and two cats—would expand, enveloping and miraculously settling these disoriented, fragile newcomers. Our massive, gentle Bernese mountain dog conveyed in an instant what would have taken the rest of us days: “You’re safe. It’s good here.”

It became addictive. Later that year I saw a photo plea on Facebook: Somebody had surrendered a mother dog and her seven 4-week-old puppies to the local shelter. They needed a safe place. I couldn’t stop looking at the face of that exhausted and suddenly homeless nursing mom. We had no idea what we were doing, taking on an entire litter plus mama—but we contacted the shelter and said yes.

What followed were five miraculous weeks with the 16 of us—humans, dogs, puppies, and cats—all fascinated with one other. I had conjured a fuzzy vision of Mama Nala and her pups spending all their time snuggled in privacy in our rec room. However, in the first hours at our home, Nala’s swishing tail announced a different plan: The entire pack would live entwined. She slept on our bed, hung out with our dogs, and happily watched as our kitties wound through her kids. So much for that “protective bitch” thing my quick research had led me to expect.

I’d spent time volunteering with shelter puppies before and learned that being around a litter for an hour is always the same: They’re darling, they’re crawling all over you, and you can’t help but laugh. With Nala’s litter, however, came an unusual intimacy from living together. Within a few days we knew each one of those puppies individually, and what was surprising and sweet was they all knew us right back.

It was bliss. Which leads back to that pesky question: How on earth do you say goodbye?

Our family teaches these puppies to anticipate joy. Then we send them out to create some.

While we’d had some experience letting go of our first fostered puppies, our emotional attachment to this litter was on another level. There was an additional torment: These pups were from a public shelter. Unlike our earlier experiences working with a private rescue group, they would be adopted by people we never met. There would be no looking these adopters in the eye and no reassuring “after” photos in my email inbox.

The saving grace of that period was that my anguish prompted my husband to say the three words that have comforted me ever since, as we’ve now let go of nearly 200 beloved puppies: “Trust the dogs.”

The second he said it, I knew he was right. I had done a lot of thinking about how fostering rather dramatically builds faith—in people, in the universe—but the last bit hadn’t clicked into place for me yet. You have to have faith in the dogs themselves. They can complete that last lap of the relay and secure the all-important love that will keep them safe forever. Just by being themselves, they can make it all turn out all right.

I took some deep breaths, trusted the puppies, and said goodbye to our first litter. (Almost—we kept Nala!)

That’s how I fell into my sweet spot: nurturing mama dogs and their litters. We’ve even had two moms give birth on our couch (their birth plan, not mine). In the first year or two I was blindly finding my way. Now—after 15-plus litters, a ton of studying, and one official dog training certification—I’m increasingly intentional at every phase. As our puppies begin to see and hear, we get to shape the world that greets them. With each calm voice, each gentle touch, each happy interaction, our family teaches these puppies to anticipate joy. Then we send them out to create some.

It’s a tiny thing in a big world filled with so much suffering. Does it even matter?

It certainly matters to these puppies. I’d wager it also matters to each family that, after a short while, can’t imagine life without their dog. It matters to the folks who swing by for a dose of joy—teenagers, neighbors, Girl Scout troops, and preschoolers. It matters to the people who stop me in the grocery store, delighting in the latest antics of our newest rags-to-riches pups, everyone knowing there’s a happy ending in sight. It also matters to the friends of friends who tell me they go to my Facebook page when they’re feeling stressed because it reminds them that there’s still some good out there.

They’re just dogs, but in taking them in, I like to think there’s a ripple effect. We all have the choice to sit around and curse the darkness or light a candle. This sure is a fun little candle to light.

Kathy Gord Callahan is the author of 101 Rescue Puppies: One Family’s Story of Fostering Dogs, Love, and Trust.