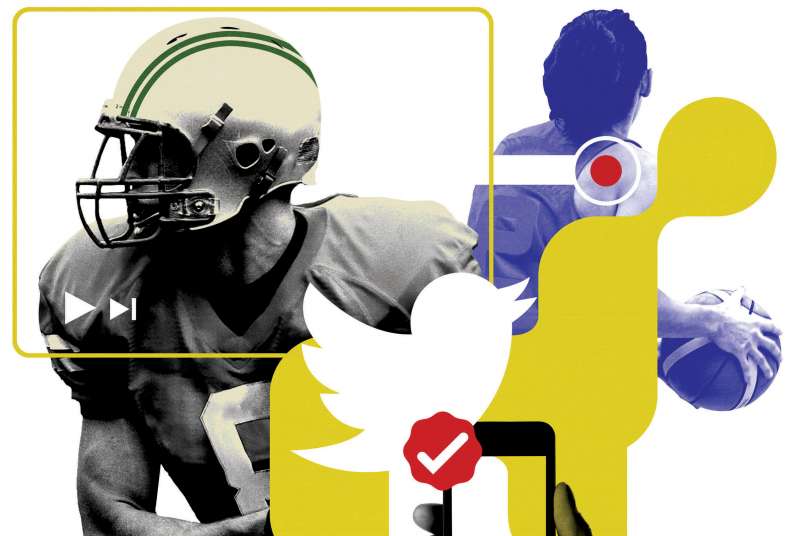 Check out the football team’s website or YouTube channel, and you’ll find videos of teammates competing on the field. Obviously. But there’s more, including footage of players hiking, hanging from a rope swing and playing paintball. The videos provide viewers—including potential recruits—a window into the lifestyle of Big Green players both on and off the field.

Dartmouth’s recruiting game has evolved in the digital age. Connecting with high school athletes has gone social, and Ivy League teams are every bit as involved as larger conferences. “Everything we do from a website, social media standpoint is trying to frame our differences,” says Joey McIntyre, the football team’s director of recruiting, operations and external relations. McIntyre, who joined the staff in 2012, remembers the old, simpler days of recruiting. “A hard letter and a phone call was how you got it done. Now a hard letter and phone call aren’t even the tip of the iceberg.”

Along with posting content on its website, the football program uses social media platforms to keep track of high school players who could one day suit up for the Big Green. Aspiring collegiate players often market themselves by posting game clips or links to their accounts at Hudl.com, which has become video central for anyone and everyone to check out high school athletes in action.

Head coach Buddy Teevens ’79 graduated well before the advent of social media, but that hasn’t kept him from embracing it. “We need to be tech savvy,” he says. “Everyone is into Facebook, Twitter and direct messaging. Some of us didn’t grow up with it, so we instruct each other. Technology is absolutely critical.”

“Everything we do from a website, social media standpoint is trying to frame our differences.”

His staff includes video coordinator Alex Dodds, a Hanover High School graduate who comes from a film background. “We had aspiring coaches in that role before,” says McIntyre. “And we found that those guys were always looking at the next coaching gig. They weren’t really giving us what we wanted from the creative piece, what we wanted to present. We needed somebody we could tell: ‘Hey, take this idea, shoot it, edit it, make it as real as possible and make it look as nice as possible—something that we feel good about presenting to our kids and families.’ ”

The football team’s recruiting efforts also utilize a cutting-edge database furnished by Atlanta-based Bluechip Athletic Solutions, to which the Big Green football program subscribed three years ago. Bluechip provides a “blend of technology, marketing strategy and content creation services for the collegiate and professional sports industry,” according to its website. The service tracks all the data and information coaches find useful. “Keeping everything organized is the only way to stand a chance nowadays,” McIntyre says. “When I first got here, each recruit was essentially a piece of paper. Our coaches were responsible for evaluating a kid and passing him along to the other coaches for evaluation. It was extremely inefficient.”

Bluechip’s Recruiting Radar platform groups potential recruits by position for Dartmouth coaches to evaluate and rank. The College’s “War Board” contains some 300 active recruits, though tens of thousands of players filter through the system each year as preliminary candidates. Dartmouth recruiters also work with Bluechip to produce the football site at dartmouthcollegefootball.com.

Companies such as Bluechip have joined forces with social media platforms such as Twitter, Facebook and Instagram to accelerate the pace of recruiting. “By the time signing day comes [in mid-winter] you should be ready to start talking to juniors if you haven’t already,” says McIntyre. “In the past you were just worried about the seniors. It was very one-dimensional.”

Big Green standout wide receiver Hunter Hagdorn ’20—who chose Dartmouth over Colorado State, Illinois, Harvard and Cornell—says the College’s digital outreach made a significant impression. “The coaches and program as a whole are active on social media,” he says. “You can see it from all angles.”

“Recruiting is about building relationships, and technology is a part of that.”

Hagdorn found a variety of content on the Big Green’s Twitter feed, including but not limited to videos, links to articles, summer camp details, the upcoming schedule and photographs of incoming freshmen at signing day. He remembers one video that made a huge difference: footage of receivers coach Jerry Taylor “miked-up” during a spring practice. “It showed how he coaches,” says Hagdorn, “how he treats his players and what practice is like on a daily basis for that position group.”

One of 12 players from his Manvel, Texas, high school team to land on a Division I team, Hagdorn earned 2016 Ivy League Rookie of the Year honors.

Asked to compare the team’s social media activity with league opponents, McIntyre says all teams have developed a digital presence across platforms, but he believes Dartmouth, Columbia, Princeton and Yale constitute the top tier. The operations director says he doesn’t measure social media success with any specific metrics, but he hopes to achieve a spike in followers during the first few months of each year in conjunction with a new recruiting cycle. “We are certainly aware of [the quantity of social media followers],” McIntyre says. “We want to get as many people as possible.”

Football isn’t the only team ON campus taking advantage of the latest digital advancements. Most Big Green teams use social media to some extent, according to Rick Bender, director of varsity athletics communications.

Women’s basketball coach Belle Koclanes has her own Twitter feed and contributes to the team’s account. “Social media is at the center of many young kids’ communications,” Koclanes says. “Every time you’re posting something, you’re recruiting.”

Last summer the basketball team’s five sophomores participated in a social media takeover during which each player managed the team’s platforms for one week to show people what their lives are like outside of Leede Arena. Amber Mixon ’18, a guard from Woodbridge, Virginia, says the experience “let our fans in the area see us on a daily basis, not just on the court. Now kids recognize us from our clinics or from our posts on social media.”

The sociology major recalls a telling moment during her junior season. “One of my teammates did our nails during the social media takeover,” Mixon says. “A girl came up to us after one of our games and asked: ‘Could you do my nails too?’ Connection made.”

Assistant basketball coach Addie Micir was last season’s recruiting coordinator under Koclanes. The former Princeton standout recalls different ground rules when she was recruited a decade ago. “Coaches could only call us once a week,” Micir says. “There was no texting, tweets or social media. It used to be the coaches called you on your home phone and only your top schools had your cell number.” NCAA rule-makers have adapted: Basketball coaches may now text and call recruits as frequently as they wish beginning September 1 of a prospect’s junior year.

Like her counterparts in the football office, Micir keeps an eye on Twitter. “We want to know when high school players have big moments or big games,” she says. “People around them tend to post things, so we get real-time info about what the kids are up to. Recruiting is about building relationships, and technology is a part of that.”

Some aspects of the recruiting process remain old school. Bender, whose duties include overseeing the upkeep of the athletics department website, played and coached baseball at Davidson College, then became the Wildcats’ sports information director prior to joining the College in 2008. He’s witnessed recruiting’s trajectory through the years. “Connecting with kids via technology is all well and good, but there still is that personal touch,” Bender says. “The way you sell yourself these days, some of it’s different with video and technology, but the spoken word, the personal interaction, those remain essential.”

Adam Boffey is a freelance writer based in Quechee, Vermont.