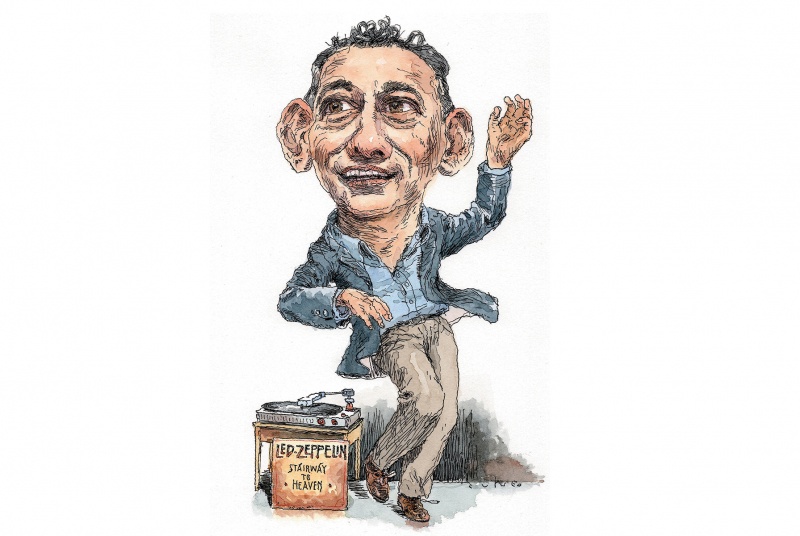 Notable: Cofounder of music-identification app Shazam, used by more than 200 million people monthly and acquired by Apple in 2018 for a reported $400 million; proponent of “Tech for Good” movement

Career: Worked at Bain, Oracle, and Viant in Silicon Valley; in 2000, with three friends, founded London-based Shazam Entertainment, which he left in 2003 to work for Save the Children; Shazam board member next 10 years; investor in technology companies with positive social impact

Personal: Lives in London with wife Rachel and their children, Tanya, 14, Max, 11, and Jeremy, 8

“In the early days of Shazam I went to festivals and clubs, trying to understand the music consumer, and wound up with a bad dance-music habit. I’m taking my older son to my next reunion. My daughter has yet to forget seeing me dancing like a madman to ‘Stairway to Heaven’ at my last one.”

“I’m not musical, but I did bring my love of classic rock to Dartmouth and spent a term at WDCR. I hear my son playing Rainbow songs, and I’m thinking, ‘Hallelujah!’ ”

“Because my dad worked for Air India, we lived all over the world. It was hard in some ways but made me more adaptable.”

“I’m forever grateful to the William Sleepeck ’41, Tu’42, family for the scholarship that made Dartmouth possible for me.”

“I have unbelievably happy memories and many close friendships from Sig Ep. I needed those because I didn’t want to hang out only with other international students. I wanted American friends and the full Dartmouth experience. It’s not about what you think—how you get the work done or the next step—it’s about socializing and building human relationships along the way.”

“Shazam was conceived by brainstorming over beers with my business partner.”

“At business school everybody was a ‘wantrapreneur.’ I believed my grandfather’s advice: ‘If you put your mind to something, you can make it happen.’ ”

“Another big influence was my boss’s boss at Oracle, who would come by my desk every couple of weeks and ask, ‘Are you having fun?’ That was all he ever said to me. My takeaway was that if you’re having fun, it’s all good.”

“I tried to shape my life to be an entrepreneur. I lived frugally. When we started our company, it was full-on. No wife, no kids, not even a girlfriend. No responsibilities. I’d call my parents once on the weekend. I was mono-focused, and it was a long slog. We launched Shazam just as the tech bubble was deflating and hoped to sell the company right around the time of the financial crisis. I didn’t expect it to take 18 years.”

“Selling Shazam was kind of like having a grown daughter. She may not be living with you at home anymore, but you still care about her welfare.”

“My advice to entrepreneurs is to find business partners with shared values. My cofounders and I agreed from the start we’d be equal partners despite very different skills. We share the same sense of humor, ethics, and work habits. We’d squabble, but friendship was always more important than the business.”

“Thanks to math professor Bob Norman, I’m a big believer in running the numbers, but metrics can be a terrible trap. Soft skills matter.”

“To me, Tech for Good means supporting the U.N.’s sustainability goals. I’m particularly interested in the climate crisis—a problem that can’t be solved by a business, a government, or an organization. I’d like to make it easier for people who want to do something but don’t know where to start.”

“You don’t have to be Bill Gates or Jeff Bezos to have an impact.”

“Life isn’t all about investing, but I believe in financial wellness—having your money work for you, consistent with your values. Then you have a voice. There are opportunities to invest even small amounts in things that matter to you.”

“I try not to take myself too seriously. I keep a card in my wallet that says, ‘Don’t worry. Be thankful. Be generous.’ I try to live by that.”