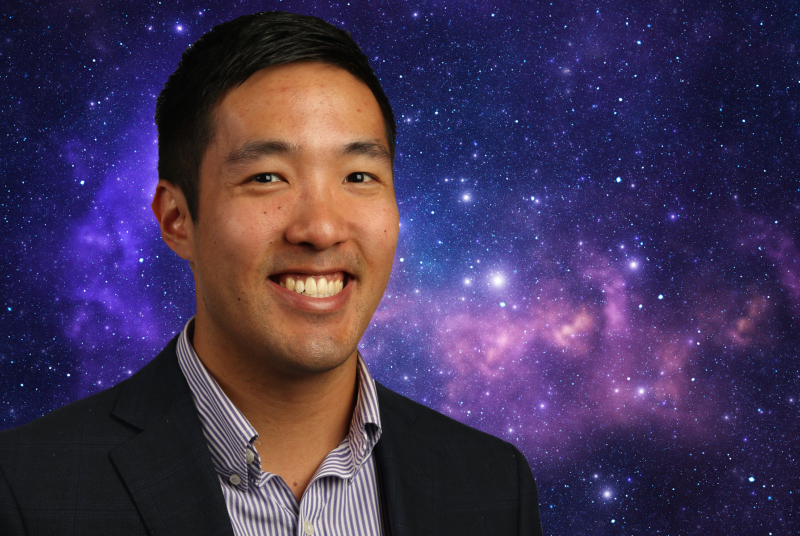 Devin Chu ’14 explores the mysteries of how stars behave at the center of our galaxy.
Lauren Vespoli ’13 | November-December 2021

Growing up in Hilo, Hawaii, Devin Chu was surrounded by astronomers who worked with the Big Island’s world-renowned Mauna Kea Observatories. After majoring in physics and astronomy at Dartmouth, he joined UCLA’s galactic center group, where his advisor and team leader Andrea Ghez won the 2020 Nobel Prize in Physics for discovering a supermassive black hole at the center of the Milky Way. Now, the postdoctoral researcher is working on an upgrade for the biggest telescopes in the world, at the Keck Observatory, which is also on Mauna Kea. The L.A.-based Chu spoke with DAM about his research on young stars, his love of working with young students, and why twinkling stars aren’t as romantic as they seem.

Tell me about your work with Professor Ghez and the galactic center group at UCLA.
Professor Ghez essentially pioneered being able to look at the very center of the Milky Way. She developed techniques to image stars that showed there were stars at the center of our galaxy. Using Newton’s laws of physics, we could determine that there’s something supermassive these stars are orbiting around. And that allowed us to figure out there is actually a supermassive black hole at the center of our galaxy.

What our group does is look at how stars orbit around it. We’re really curious whether gravity will behave the same way around a supermassive black hole. For context, the black hole is 4 million times the mass of our sun, and the sun makes up 99.97 percent of all the mass in our solar system. When you multiply that by 4 million, the gravity becomes really strong.

What I do is called spectroscopy, or breaking up the star’s light into its different wavelengths. It’s like sending starlight through a prism and getting that rainbow effect. I can see how a star moves, and we can learn if these stars are really young or old and how quickly they’re spinning. I’m especially interested in these young, really hot, massive stars. They very much follow that saying, “Live fast, die young.” There are a lot of very strong forces around a supermassive black hole that aren’t conducive to star formation, so how do these young stars form so close to it? That’s one of the big questions I’m trying to tackle.

How old is a “young” star?
It’s funny, young stars are probably only a few million years old. We do see a lot of old stars, which are around 10 billion years old. So on that scale these million-year-old stars are very, very young.

How did it feel when you found out that Professor  Ghez won the Nobel Prize?
It was quite surreal. Since it happened in 2020, it was a little bittersweet. I’m sure under normal circumstances we’d have this massive party at our office together, but obviously the circumstances didn’t allow it, so we had to celebrate virtually.

What kind of work are you doing with the telescopes at the Keck Observatory now?
Keck uses this great technology called adaptive optics, which allows us to correct for the atmosphere to see the stars better. The atmosphere is very turbulent, and all these different effects such as wind are what make the stars twinkle. While twinkling stars are very romantic, they’re really not good for astronomy or for the precision that we need. Adaptive optics allows us to correct for that twinkling. Keck is currently upgrading its adaptive optics system, and my postdoctoral work is helping prepare for that upgrade. I’m trying to figure out the science we can achieve with that updated technology.

How did you first become interested in astronomy?
The first thing that got me interested as a young kid was my mom taking me to the Hilo Public Library and checking out a book on the solar system. I really loved the photos of the different planets, and that got me hooked. And being able to grow up in a town like Hilo, where astronomers would come to the public schools and do career fairs and demos, really fostered my interest.

Were there any specific classes or professors at Dartmouth that shaped your career path?
A big influence was my first physics class, which I didn’t realize was taught by an astronomer, professor Gary Wegner. One class he made this comment like, “I’m an astronomer, so I don’t usually deal with these kinds of demos with blocks sliding around.” And that stood out to me because I was interested in astronomy. I ended up going to his office hours and then did research with him in the Presidential Scholars program. I realized I wanted to do observational astronomy, which is essentially using telescopes that collect data and look at an enormous range of really cool things, from planets in our own solar system to supernovae exploding in different galaxies. There are different branches in astronomy, such as theoretical computing, which I wasn’t particularly keen on, and building telescopes or building instruments for telescopes. I applied to UCLA because one of its strengths is its observational astronomy program.

What are you most proud of at this point in your career?
Outside my typical work as an astronomer, I’m really proud of the educational outreach I’ve done. Here in Los Angeles, I’ve done some science demonstrations in schools, like what I experienced as a student in Hawaii. And I also find it really rewarding going back to Hawaii as an educator to support programs such as the Akamai Workforce Initiative, an undergrad internship for students interested in STEM, which I participated in. I’ve also sat on career panels for a program called Journey Through the Universe, describing my career path to the students, emphasizing that I was a Hawaii public high school student just like them. Those types of programs played a big role in who I’ve become.

What kinds of work do you hope to do in the future?
I’m really drawn toward working for an observatory, whether that means supporting other astronomers with their observations or taking a role in overseeing or thinking about the way a telescope can help us tackle future science questions. And I’d still like to continue giving back to the community that raised me in Hawaii. Looking back, I’m so in awe that I ended up here.