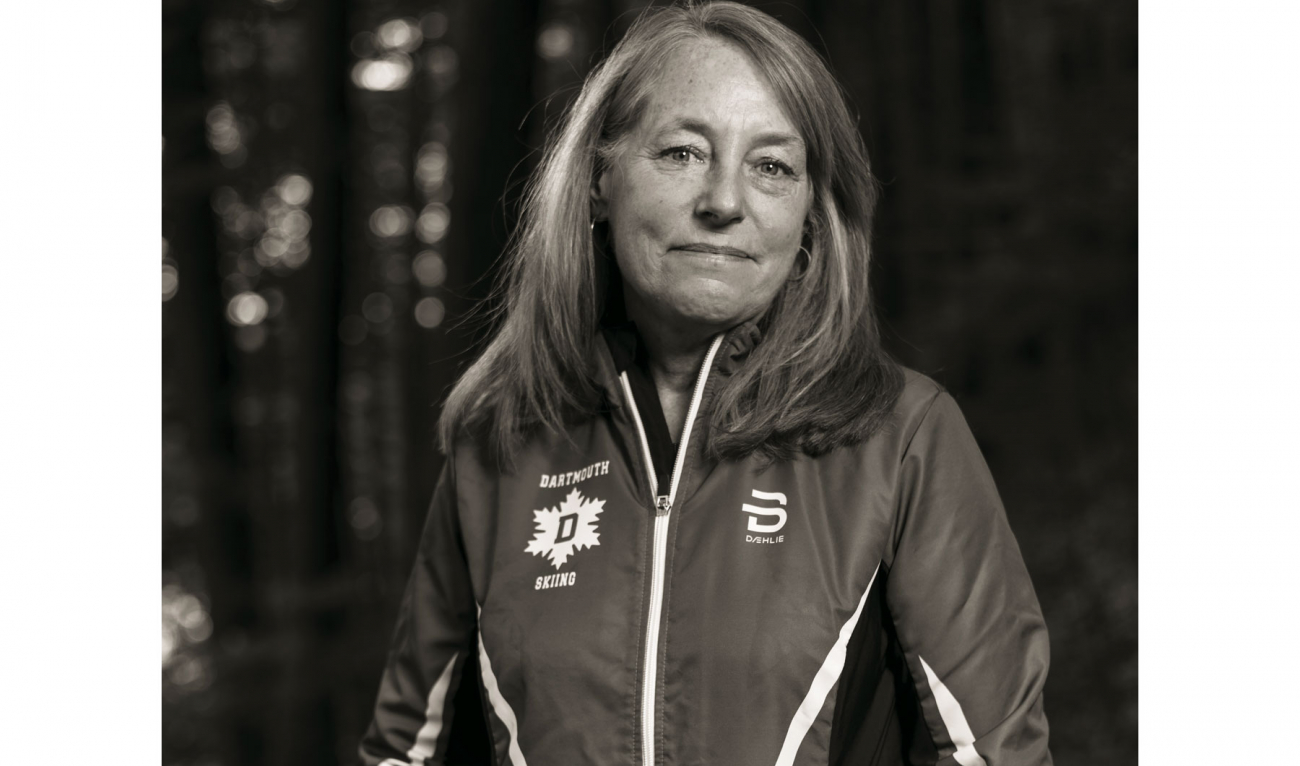 At the 2016 SuperTour races in British Columbia, Katharine Ogden ’21 stood at a crossroads. She had taken time off after graduating from Stratton Mountain (Vermont) High School to pursue cross-country ski racing full time. She had a top-10 and two top-15 Junior World Cup finishes behind her, had earned a spot on the World Cup circuit, and was looking ahead to a possible Olympics—but she was unhappy and burned out.

Ogden noticed the Dartmouth women’s Nordic team watching the races, laughing and acting silly and having the best time together. “I was blown away by how happy that team was,” she recalls. “That was missing for me. I knew I needed to change my relationship with skiing. I called Cami and asked if we could meet for coffee.”

Five years later, Ogden remembers that meeting with head coach Cami Thompson Graves as if it happened last week: the tiny ski village, multiple lattes, the rising excitement she felt hearing Thompson Graves talk about her skiers not as athletes but as whole people. Thompson Graves told Ogden she believed in team camaraderie and competition—and in individual goals, and that, at Dartmouth, she would support Ogden’s emotional health and athletic development and personal ambition no matter what form that took.

“It was exactly what I needed,” Ogden says.

At Dartmouth, the skier fell back in love with the sport. “Everyone there was psyched to be there,” Ogden says. “Cami asked us to give everything we had, but she knew when we needed to de-stress. She gave us amazing freedom. She let me miss practice so I could race for the club bicycle racing team. We trained in party dresses. We dyed our hair pink and purple. We were happy, so we were fast.” That happiness helped Ogden become Dartmouth’s first two-event NCAA champion in 56 years and one of the most decorated skiers in Dartmouth history.

When the U.S. delegation marches into Beijing’s National Stadium in early February for the 2022 Olympics, Dartmouth will extend its extraordinary record of having sent athletes to every Winter Games since the modern Olympics began in 1924. Thompson Graves, the College’s Nordic women’s coach for the past three decades, has trained close to a dozen of them, dating back to Nina Kemppel ’92. Ogden was one of the favorites heading into qualifying races that determine the U.S. ski team. Others include Julia Kern ’19 and two-time World Cup winner Rosie Brennan ’11. Biathlete Susan Dunklee ’08 is already on the team.

Thompson Graves doesn’t take much credit for the Olympic success. “Honestly, it has to do with the quality of the people who come here,” she says, “and the people they become while they’re here. A lot of our skiers want to go on and race internationally, and Dartmouth gives them options.”

Thompson Graves understands her athletes’ aspirations. She was an All-America skier at St. Lawrence in the early 1980s and competed for the U.S. ski team. In 1986 she was the U.S. national 5K champion. She has coached Junior National teams and the national disabled ski team, and she’s led international trips and camps. She’s seen, firsthand, how female athletes cope with pressure, overtraining, and injury. She has served as chair of the National Cross Country Sport Committee and on the U.S. Ski & Snowboard board of directors, and she represents the United States on FIS, the international board that governs the multifaceted sport of ski racing.

The coach has kept up with cross country’s radical and nuanced changes in equipment and technique. She grasps the politics and logistics of international competition, from issues of compliance and doping to the complexity of scheduling and canceling races during the pandemic. “She’s a consensus builder,” says Chris Grover ’93, head coach of the U.S. cross-country ski team. “She listens. She leverages her international respect to build bridges.” Tiger Shaw ’85, two-time Olympic alpine skier and now president of U.S. Ski & Snowboard, says Thompson Graves is their “go-to person” for any questions about cross-country racing or organization. “She’s completely vertical,” Shaw says. “She’s an expert on everything from juniors all the way up to the Olympics. There aren’t many people in the sport who have stayed involved in all those levels.”

Her experience has given Thompson Graves a big-picture view of the sport—and she shares it with her athletes. “I like to bring my teams to Quebec and out to British Columbia to watch World Cup races just to let them be around that level,” she says. “I make sure they’re in touch with alums who are out ahead of them. I’ll help them plan for that next stage if that’s what they want.”

Several of her former skiers describe how Thompson Graves coaches without ego: that she isn’t afraid to try new approaches, to learn from her skiers and let them learn from each other. She also is careful not to contradict advice from her skiers’ national-level coaches. Brennan, who competed in the 2018 Games in South Korea, notes how important it was for her to have a female coach, the only one she has had. “Especially at that age, in college, it was hugely helpful to have someone who knew what a female body was going through and who could help us navigate a time that can be challenging.”

They all talk about the fun and team spirit that Thompson Graves encourages. Grabbing party dresses from the locker room to wear while eating together in the dining hall. Early-morning drives for training runs up Mount Ascutney. Playing coed intramural soccer with the men’s team. During the bare winter of 2008, following a surprise overnight snowstorm that saved the home races for the Dartmouth Winter Carnival, team members got up early and built snowmen outside Thompson Graves’ house on Allen Street in Hanover, to greet their coach when she looked outside. A bunch of them babysat for her daughter, Sophie.

Thompson Graves remembers a time when she apologized for Dartmouth’s program: It wasn’t a big school, couldn’t offer scholarships, didn’t ski at altitude or have great snow, and its athletes had to take final exams while the season-ending races were happening.

“Then we won the NCAA championship in 2007,” she says. “And I couldn’t make those excuses anymore.” Instead, she—and skiers who choose Dartmouth—cite several key advantages the College has, including strong academics, good funding, a tradition of skiing as part of the school’s culture, its training terrain—and, especially, the D-Plan. The quarter system allows elite-level skiers the flexibility to train and compete in a year-round schedule that works best for them. Many of Thompson Graves’ top recruits ski for Dartmouth for four years on the Northeast collegiate Winter Carnival race circuit and the following NCAA championships. Others transition partway through college to international racing, taking six years or more to graduate. Some, such as Kern, train with the Dartmouth team off-season but never compete in a single Carnival race, opting instead to spend the winter with the World Juniors or the U-23 national team. “That mix is a strength of our program,” says Thompson Graves. “It’s that balance of all these people learning from each other and working together where magic can happen.”

Brennan recalls the magic. “We pushed each other and got that taste that made us all want to do more,” she says. “We got the sense that we were doing something big together.” 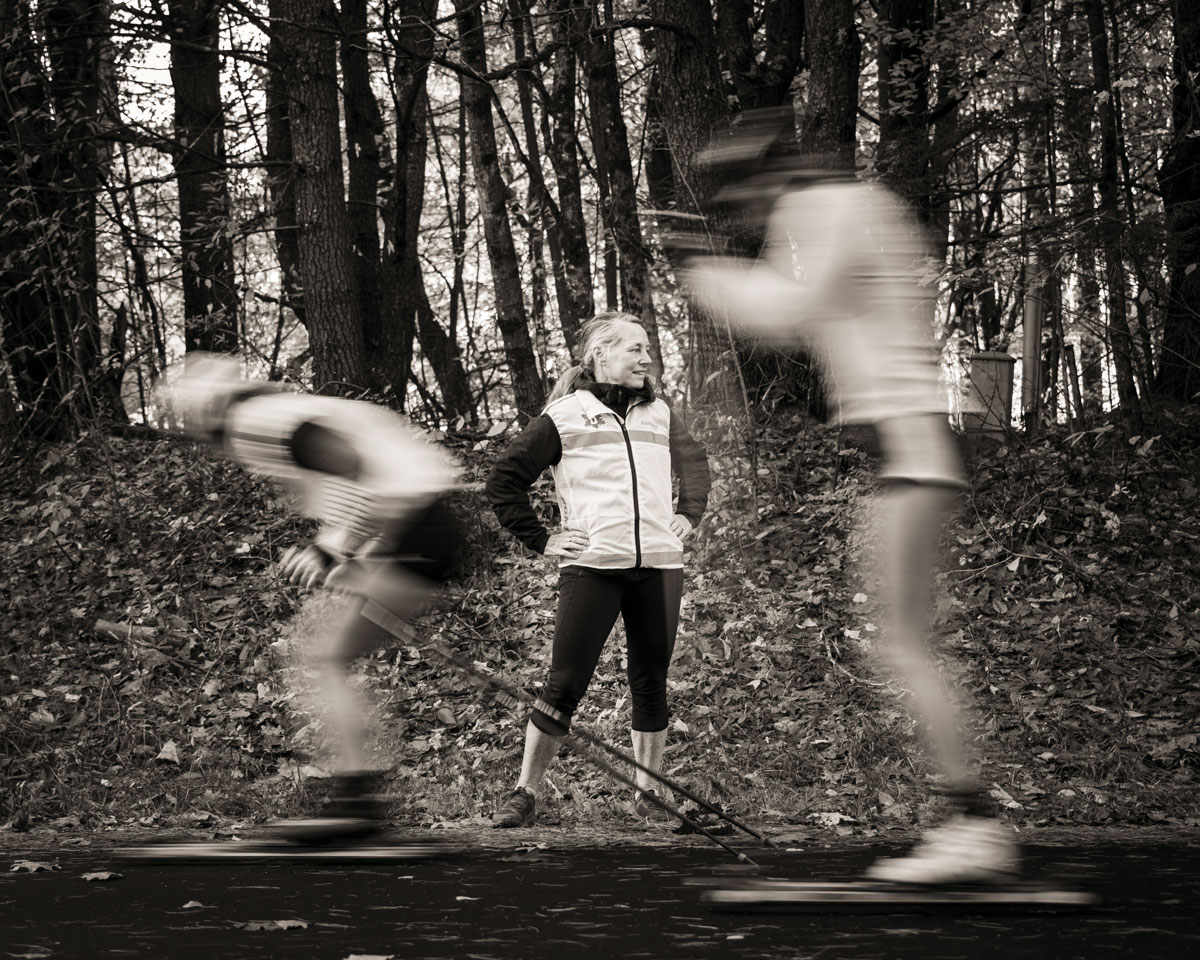 On a rainy Thursday in October, a few colds were running through the women’s Nordic team. Homecoming and midterms had been depleting. The brutal annual time trial run up Moosilauke was looming. Thompson Graves gave the skiers a reprieve from their twice-a-day workouts: an afternoon stroll of a 90-minute roller ski across the river, up Route 5, then Route 132 to Union Village Road and back, 25 kilometers or so just to work their bodies and play with technique and focus on their “V2” (double-poling) timing.

The coach rode her bicycle behind the weaving, serpentine line of roller skiers and listened to the women talk as they poled, getting a read on their moods and minds. She stopped them just after the turn onto 132, where a side road led steeply up through fields opposite the Ompompanoosuc River, and had them drop their poles and make a few runs up and back striding with their feet only. “They need to be able to ski easy,” she says. “They’re young and strong enough to bull through a course, but they’ll ski faster if they ski easy.”

A couple of times during the loop, Thompson Graves stopped them to switch up their order. “It’s impossible not to notice what the person in front of you is doing,” she says. “The girls learn from each other, even when they’re not aware of it.” Through the roller-coaster of the Goodrich Four Corners Road, with rain coming down hard, the skiers whooped and laughed as they flew downhill. They turned off the rough road back onto the freshly paved Route 5 for the run home. “Black powder!” Chelsea Moore ’22 yelled from the lead, and the women laughed again.

Later, Thompson Graves answered emails at her desk by the fireplace in her corner office in Robinson Hall. Surrounded by old trophies, championship plaques, and generations of framed photos of Dartmouth skiers, she feels part of a lineage. Her father was a four-event skier for the University of Vermont in the early 1950s. Her older sister, Leslie Thompson Hall ’86, was a three-time Olympian. Leslie’s daughter, Ella Hall ’20, skied at the College for Thompson Graves.

Part of the College’s success has to do with the continuity of its coaching staff. Men’s cross-country head coach Ruff Patterson, whose office this had been, coached here for 27 years. Down the hall, her counterpart on the men’s alpine team, Peter Dodge ’78, is just retiring after 32 years. John Morton, Al Merrill, Walter Prager—many of the head coaches taught decades’ worth of Dartmouth students.

Thompson Graves and her husband, Peter Graves—a veteran Olympics on-site and television sports announcer—live in East Thetford, Vermont, where they moved in 2010, the year they were married, and where they’re adjusting to a newly empty nest along with a cat and 1-year-old labradoodle. Thompson Graves plans to continue coaching as long as it stays fun. “Maybe,” she says, “win one more NCAA title.”

Outside her door, the old smells of wood and dust give the ski office the feeling of a museum—except that so many of the skiers and trophies on the wall are recent.

“It’s funny,” says Thompson Graves. “I’ve never actually been to an Olympics, even when my sister competed. It always happens during the college racing season, so I’m here.” She notes that one of the best changes in the sport since her competitive days has been the evolution of computers and live streaming. “In the old days,” she says, “the best we could hope for was a video of the Nordic races after the fact. Now our skiers FaceTime with Dartmouth Olympians before their races. It’s awesome. We will definitely watch the races together as a team in February—probably at 4:30 in the morning on a big screen in Collis. That will be a blast.”

Jim Collins is a former editor of DAM.