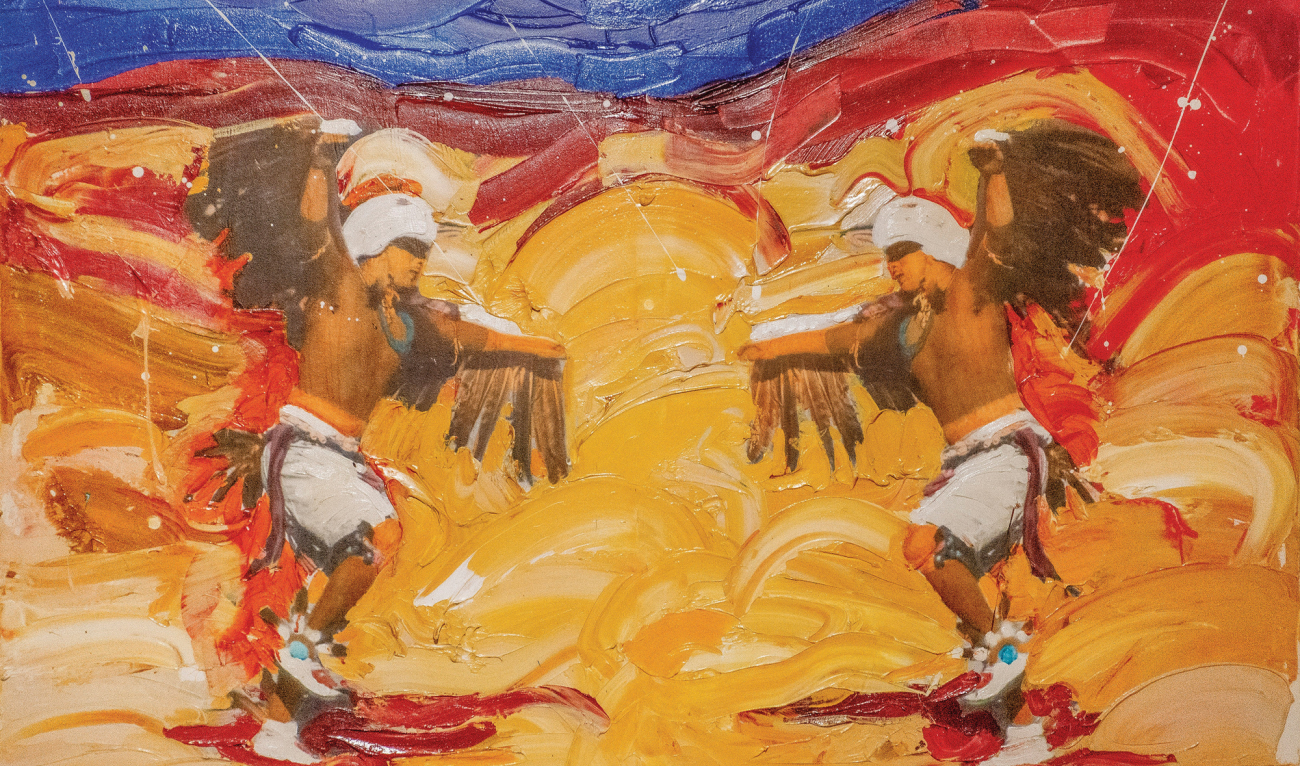 Heartbeat of the People

The origins of Dartmouth’s Pow Wow, in existence now for nearly a half century, can be traced back to a conversation between President John Kemeny and then-freshman Howard Bad Hand ’73.

Kemeny wanted Bad Hand’s advice on how to strengthen the presence of Native American students on campus. In the early 1970s they were sorely underrepresented. Dartmouth had been established with the explicit purpose of educating Native Americans, but Bad Hand, a South Dakota native from the Lakota Nation, believes he was one of only four Native students enrolled in 1969.

“I said if I were him I would start a Native American studies program that you could get a degree in,” recalls Bad Hand, “and I would support this dance we were contemplating starting.”

The dance Bad Hand was referring to would be held every year as a “celebratory time where tribes gather together to share their culture and their ways with each other,” he says.

Kemeny listened. In addition to starting an annual pow wow, as Bad Hand suggested, the president pledged to recruit more Native students and establish a Native American studies program—efforts that have helped Dartmouth graduate more Native students than all the other Ivies combined.

“If it wasn’t for him,” says Bad Hand, “the Native American studies program wouldn’t have happened, and Pow Wow certainly wouldn’t have expanded as it has to date.”

Dartmouth’s first Pow Wow was held in 1972. It was a small affair held inside College Hall (now Collis), with no more than 100 spectators and participants, by Bad Hand’s estimate.

“We sent the word out to almost every school that had Native students we thought would participate, and we had members of the American Indian Society come and join,” he says. Even so, organizers had so much trouble finding interested Natives that non-Natives such as Tom Teegarden ’74 were invited to perform.

“Part of my Dartmouth experience was learning more about the Native experience and incorporating components of that into my life,” says Teegarden, now a vice president for High Water Mark, a Native, female-owned environmental consulting firm in New Mexico. “That experience gave me a different set of lenses to see the world.”

Pow wows back then were more common on the Plains, especially Oklahoma, than they were in New England. “So many of the tribes were disinterred from their traditional homelands and relocated in Indian territory, which is now Oklahoma,” says Taylor Keen ’91, a member of the Omaha and Cherokee tribes who grew up in northeast Oklahoma and on the Omaha Reservation in Nebraska. He was also the president of Native Americans at Dartmouth and, as a member of Phi Delta Alpha, the president of the Interfraternity Council.

Although Pow Wow continued every year, finding a permanent home proved challenging. After College Hall, it was held in an open field on the west side of campus near the Tuck School, then relocated once more to Storrs Pond Recreation Area.

Bruce Duthu ’80, a professor of Native American studies and former chair of the department, says Storrs Pond, two and half miles north of campus, had its pros and cons. “There was a kind of intimacy, but the downside was that it was very much off the beaten path,” recalls Duthu, a member of the United Houma Nation of Louisiana. “If you happened to be a casual visitor driving through Hanover, you would never know there was a pow wow going on.”

Wanting more visibility, the Native community sought to relocate the event closer to campus. From then until 1995, it was held at the Bema, which “identified it as more of a Dartmouth event,” says Duthu.

Home on the Green

Today, Pow Wow is held Mother’s Day weekend on the Green, where it’s been since 1995, making it highly visible. On a warm spring day, the two-day event can attract more than 1,500 people.

It’s now the largest student-run event on campus and takes nearly a full academic year to plan. In 2019, the event cost more than $62,000, with funds coming from Dartmouth offices, private donations, and student fundraising efforts. “We really take pride in that it’s student-organized,” says Skyler Kuczaboski ’21, co-chair of the 2019 Pow Wow and a member of northern Minnesota’s Ojibwa Tribe. “I always loved going to pow wows growing up, so I figured, what better way to be involved than help organize?”

Sarah Palacios, director of the Native American program and a member of the Pueblo of Pojoaque, says Pow Wow has a special place in the hearts of students who have grown up with the tradition. “There’s always such an enthusiasm from the students, which is incredible to see,” she says.

Unfortunately, that enthusiasm has been dampened by social distancing, which forced the cancellation of last year's Pow Wow. This year a student committee plans to hold an alternative, virtual celebration of Indigenous culture, with hopes for a Pow Wow return in 2022.

Pow Wow is one of only six annual events the college holds on the Green. The other events include the Homecoming bonfire, Winter Carnival, Commencement, the reunion concert, and Summer Carnival.

Michael Hanitchak ’73, who worked in the Native American program as director of students in the late 1990s, remembers how concerned the Dartmouth administration was that spring events might make the Green less than pristine for Commencement. “There was a big controversy over whether Pow Wow should be on the Green,” says Hanitchak, who is a member of the Choctaw Nation. “The administration saw the importance of it.”

Many Native students viewed the College’s decision to permanently relocate Pow Wow to the center of campus as a formal recognition of its commitment to Native students and studies after years of marginalization. “It’s the one time you can stand on the Green and not feel like a minority or not feel excluded or not feel that you don’t quite belong entirely,” says
Cinnamon Spear Kills First ’09, Adv’13, who is Northern Cheyenne. “Just hearing the voices of our people and the sound of the drums echoing off the ivy walls creates a sense of validation that this is our school and that it is our home for the four years that we’re there.”

“It’s great to have it on the Green, and I applaud that, but really it’s in the heart of the people,” says painter Mateo Romero ’89, who returned to Hanover in 2009 to photograph Pow Wow for a series of mixed-media portraits that now appear in the Hood Museum collection. The series includes portraits of dancers including novelist Louise Erdrich ’76, an artist whom Romero calls an inspiration, and her daughter, Aza Erdrich Dorris ’11.

“Pow Wow is in your heart, regardless of where it happens—it’s a spiritual moment,” says Romero, a member of the Cochiti Pueblo Tribe.

Pow Wow is now clearly a Dartmouth tradition and presents an opportunity for Native students to carry on a legacy. Keen once danced in regalia that came from a descendant of Joseph Brant, a Mohawk Indian chief who studied with Dartmouth founder Eleazer Wheelock at Moor’s Indian Charity School. Portraits of Brant, who was a British military officer during the Revolutionary War, can be found around Dartmouth’s campus, including one featuring Brant skating on Occom Pond. “What an honor it was to be adorned in Mohawk tribal regalia by a descendant of Joseph Brant when they asked me to be the head man,” says Keen.

Many spectators are unaware how much meaning is tied to every single feather or piece of regalia at Pow Wow. The eagle feather staff used in the opening procession, for example, is made of feathers sheathed with the Vietnam Service Ribbon and features 21 Purple Heart ribbons to honor the 21 Dartmouth men who died in the Vietnam War. The staff was made by Trudell Guerue ’74, a Vietnam veteran and Sicangu Lakota who came to the College after serving in the Army Airborne.

“We have argued in the Native American program with ourselves for years—should we be putting all these resources into what most people think is just a show?” Hanitchak says. “And we’ve always come up with, ‘Yes, we should.’ Even though resources may be scarce, it is such a meaningful event.”

A Different Kind of Homecoming

While most Dartmouth alumni return to Hanover for their class reunions, many Native alumni return to Dartmouth to dance at Pow Wow, as Keen, Erdrich, Dorris, and Jodi Archambault ’91 have. Archambault, of the Hunkpapa and Oglala Lakota tribes, worked as a policy advisor on Native American affairs for President Barack Obama’s administration and at the U.S. Department of the Interior.

“There’s something about the Dartmouth experience, of the smaller, more intimate familial space,” says Romero, acknowledging that the Dartmouth Pow Wow isn’t a high-end affair. “It’s a different feeling and look, but it is absolutely important and meaningful. Maybe in some ways it’s more meaningful. It’s about groups of students coming out and saying they are Native American and proud of it.” 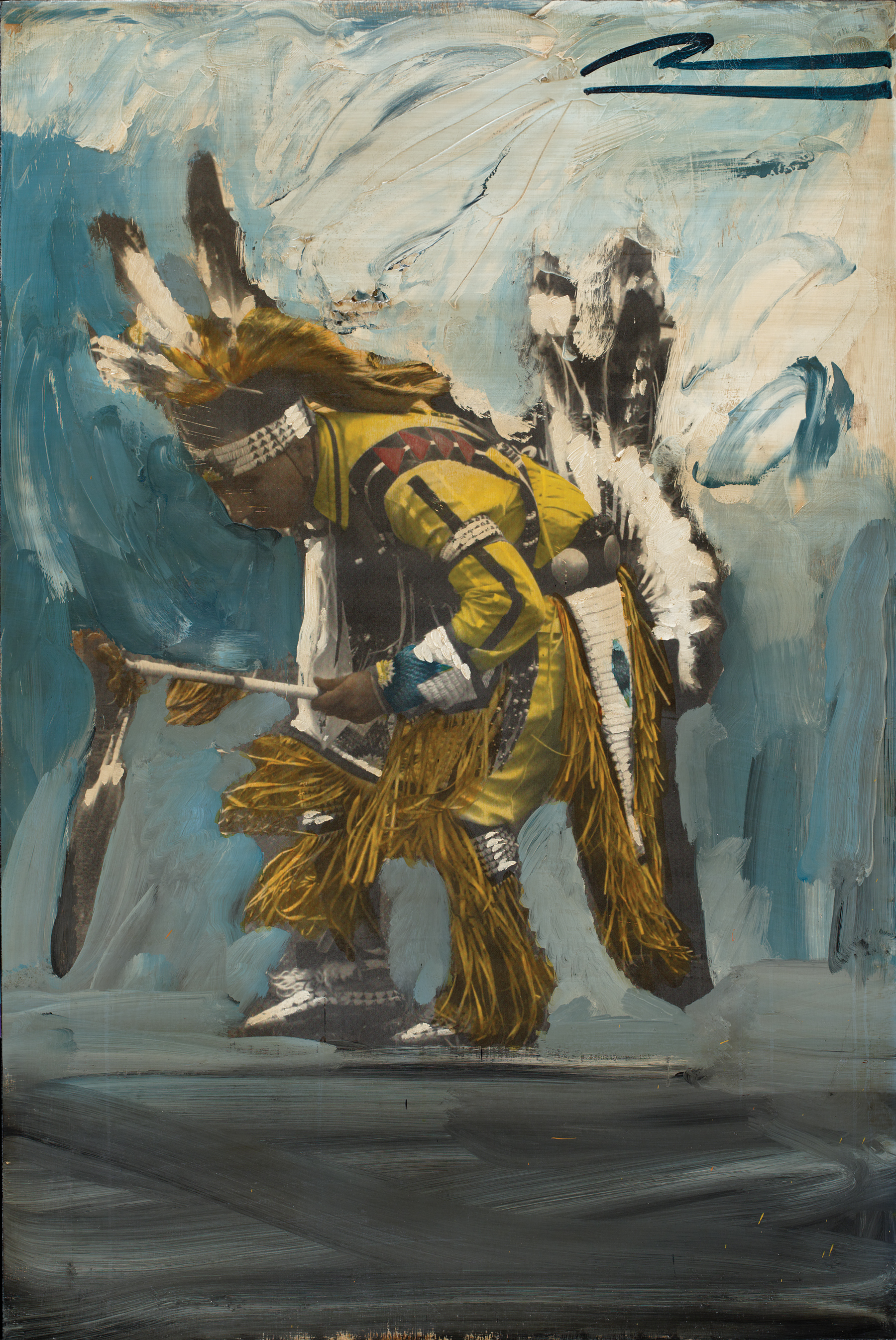 Here’s a guide from the Native American program to some of the participants and etiquette involved in this unique and ceremonial expression of cultural identity.

Host Drum: The leader of the music. Each day this person sings the first song, which is viewed as an opening prayer.

Master of Ceremonies: A narrator who uses storytelling, humor, and vocal energy to guide the participants and inform the audience. The emcee also announces when photos are permitted.

Head Man and Woman Dancers: These two lead all dancers into the arena at the start and end of Pow Wow. “It’s a really big honor to be asked,” says 2019 head woman, Skyler Kuczaboski ’21. “It’s a recognition that you’re a good dancer, you know what’s going on in pow wows, you’re an important community member to Dartmouth, and we want you to be part of this in a bigger way.”

Arena: The sacred area where Pow Wow takes place. It represents the circle of life, and those within it should be reverent and respectful. No kids playing here, please.

Arena Director: A person who acts as the mind of Pow Wow and takes charge of all the moving pieces. The director instructs the drummers and dancers and supervises the judges of each competition.

Drum: The “heartbeat of the people,” according to some Native Americans, it is entrusted to the care of one of the singers and treated with great respect.

Eagle Feathers: Do not pick up a feather if it falls on the ground. Let its owner or a Pow Wow committee member know. Show respect for the feather, as the eagle represents a link to the Creator.

Honor Songs: These pay tribute to groups and individuals. When honoring a person, someone may drape him or her with a shawl. Observers are asked to stand, remove headwear, and pay respect. Some memorial or prayer songs may be performed without any dancing.

BETSY VERECKEY is a writer who lives in Vermont.

This story has been updated to correct the date when Pow Wow was first held on the Green.