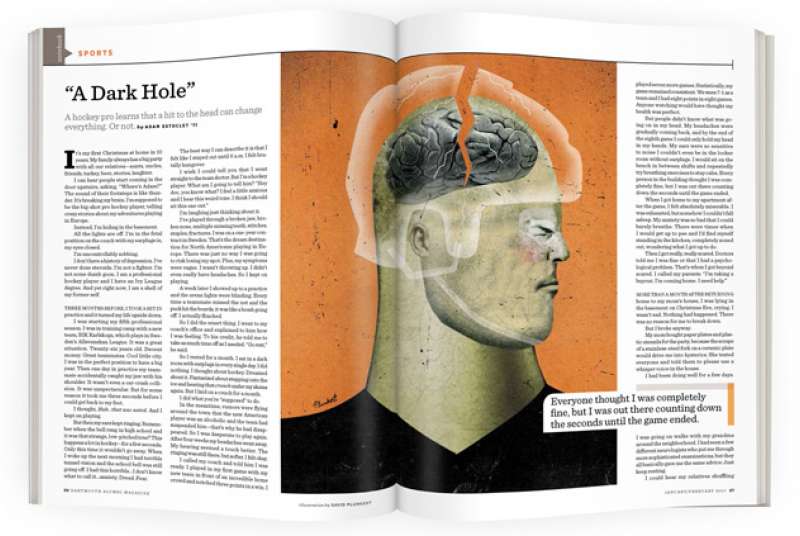 It’s my first Christmas at home in 10 years. My family always has a big party with all our relatives—aunts, uncles, friends, turkey, beer, stories, laughter.

I can hear people start coming in the door upstairs, asking, “Where’s Adam?” The sound of their footsteps is like thunder. It’s breaking my brain. I’m supposed to be the big-shot pro hockey player, telling crazy stories about my adventures playing in Europe.

Instead, I’m hiding in the basement.

All the lights are off. I’m in the fetal position on the couch with my earplugs in, my eyes closed.

I don’t have a history of depression. I’ve never done steroids. I’m not a fighter. I’m not some dumb goon. I am a professional hockey player and I have an Ivy League degree. And yet right now, I am a shell of my former self.

Three months before, I took a hit in practice and it turned my life upside down.

I was starting my fifth professional season. I was in training camp with a new team, BIK Karlskoga, which plays in Sweden’s Allsvenskan League. It was a great situation. Twenty-six years old. Decent money. Great teammates. Cool little city. I was in the perfect position to have a big year. Then one day in practice my teammate accidentally caught my jaw with his shoulder. It wasn’t even a car-crash collision. It was unspectacular. But for some reason it took me three seconds before I could get back to my feet.

I thought, Huh…that was weird. And I kept on playing.

But then my ears kept ringing. Remember when the bell rang in high school and it was that strange, low-pitched tone? This happens a lot in hockey—for a few seconds. Only this time it wouldn’t go away. When I woke up the next morning I had terrible tunnel vision and the school bell was still going off. I had this horrible…I don’t know what to call it…anxiety. Dread. Fear.

The best way I can describe it is that I felt like I stayed out until 6 a.m. I felt brutally hungover.

I wish I could tell you that I went straight to the team doctor. But I’m a hockey player. What am I going to tell him? “Hey doc, you know what? I feel a little anxious and I hear this weird tone. I think I should sit this one out.”

I’m laughing just thinking about it.

I’ve played through a broken jaw, broken nose, multiple missing teeth, stitches, staples, fractures. I was on a one-year contract in Sweden. That’s the dream destination for North Americans playing in Europe. There was just no way I was going to risk losing my spot. Plus, my symptoms were vague. I wasn’t throwing up. I didn’t even really have headaches. So I kept on playing.

A week later I showed up to a practice and the arena lights were blinding. Every time a teammate missed the net and the puck hit the boards, it was like a bomb going off. I actually flinched.

So I did the smart thing. I went to my coach’s office and explained to him how I was feeling. To his credit, he told me to take as much time off as I needed. “Go rest,” he said.

So I rested for a month. I sat in a dark room with earplugs in every single day. I did nothing. I thought about hockey. Dreamed about it. Fantasized about stepping onto the ice and hearing that crunch under my skates again. But I laid on a couch for a month.

I did what you’re “supposed” to do.

In the meantime, rumors were flying around the town that the new American player was an alcoholic and the team had suspended him—that’s why he had disappeared. So I was desperate to play again. After four weeks my headaches went away. My hearing seemed a touch better. The ringing was still there, but softer. I felt okay.

I called my coach and told him I was ready. I played in my first game with my new team in front of an incredible home crowd and notched three points in a win. I played seven more games. Statistically, my game remained consistent. We were 7-1 as a team and I had eight points in eight games. Anyone watching would have thought my health was perfect.

But people didn’t know what was going on in my head. My headaches were gradually coming back, and by the end of the eighth game I could only hold my head in my hands. My ears were so sensitive to noise I couldn’t even be in the locker room without earplugs. I would sit on the bench in between shifts and repeatedly try breathing exercises to stay calm. Every person in the building thought I was completely fine, but I was out there counting down the seconds until the game ended.

When I got home to my apartment after the game, I felt absolutely miserable. I was exhausted, but somehow I couldn’t fall asleep. My anxiety was so bad that I could barely breathe. There were times when I would get up to pee and I’d find myself standing in the kitchen, completely zoned out, wondering what I got up to do.

Then I got really, really scared. Doctors told me I was fine or that I had a psychological problem. That’s when I got beyond scared. I called my parents: “I’m taking a buyout. I’m coming home. I need help.”

More than a month after returning home to my mom’s house, I was lying in the basement on Christmas Eve, crying. I wasn’t sad. Nothing had happened. There was no reason for me to break down.

But I broke anyway.

My mom bought paper plates and plastic utensils for the party, because the scrape of a stainless-steel fork on a ceramic plate would drive me into hysterics. She texted everyone and told them to please use a whisper voice in the house.

I had been doing well for a few days. I was going on walks with my grandma around the neighborhood. I had seen a few different neurologists who put me through more sophisticated examinations, but they all basically gave me the same advice: Just keep resting.

I could hear my relatives shuffling around softly upstairs, trying to whisper. These people whom I love. And I just couldn’t move. I couldn’t go up the stairs. I was frozen. I was completely aware of what was happening to me and I couldn’t stop it. It was terrifying.

For two months I was up and down. I would feel good, then small things would send me into a tailspin. In January I watched the movie Concussion and I had a stomachache for a week. I wondered if the broken guys I was watching on the screen were previews of what life would be like for me in 20 years. Watching TV hurt. Walking hurt.

One day I got an email from a former Dartmouth doctor, Dr. Thomas McAllister ’75, DMS’78, now the head of concussion research for the NCAA, that changed my life. I told him how much I was struggling and that nothing seemed to be helping. So he recommended that I reach out to a neurologist who was at the University of Michigan named Jeff Kutcher. He told me that Dr. Kutcher was a leader in the sports concussion field and had started a new specialty clinic called the Sports Neurology Clinic.

I asked around and heard about Kutcher’s mind-blowing track record of successfully rehabbing NHL players, and I realized he wasn’t just a reputable guy who could help me, he was the guy. I was through-the-roof excited. I sent him an email at 7:30 on a Friday night. Most doctors would have got back to me in a week. I got a response 15 minutes later: “Come see me in Michigan on Monday morning.”

When I got to his clinic I almost couldn’t believe what I was seeing. There was a big room. In the big room was a Ping-Pong table. In front of the table was an electronic surfboard. Behind the table was a huge projection screen playing an NHL broadcast.

He didn’t bullshit me.

And he promised that he could fix me. Not through rest, but through slowly rehabilitating my brain—by building its systems back up from scratch.

That’s where the surfboard Ping-Pong comes in.

He fetched the remote control and put it on the baby setting.

The first time, I could barely stand on it without feeling I was going to pass out.

“Don’t worry,” he said. “In a few weeks you’ll be balancing on that thing and hitting Ping-Pong balls while telling me who scored in the hockey game. We need to get all your systems working in tandem again. That’s how we fix you.”

I got into the car with my mom, aunt and grandma and we started the long drive home. I broke down in tears for no reason at all. My grandma held my hand while I sobbed.

After a while, it passed. And I thought, I’m going to beat this. I’m going to stand on that freaking surfboard and hit Ping-Pong balls and watch hockey.

Dr. Kutcher and his team helped me out of an extremely dark hole. I’m not 100 percent, but I’m not an idiot. I know what’s happening. I have an Ivy League degree. I could get a real job. I could move on and never play hockey again.

But who am I kidding? You can’t replace the rush. If doctors could tell me tomorrow that the next 10 hits—or the next 100 hits—could turn me into a vegetable when I’m 40 years old, maybe I would be convinced.

One-hundred percent of hockey players reading this who are feeling weird will keep on playing.

Or, who knows, maybe some of them will be smarter than that.

Maybe they’ll reach out and find help, before they wake up crying for no reason.

Following a year of recovery, Adam Estoclet now plays professional hockey in Seoul, South Korea, and spends his summers in Los Angeles and Chicago.
A longer version of this piece appears here.