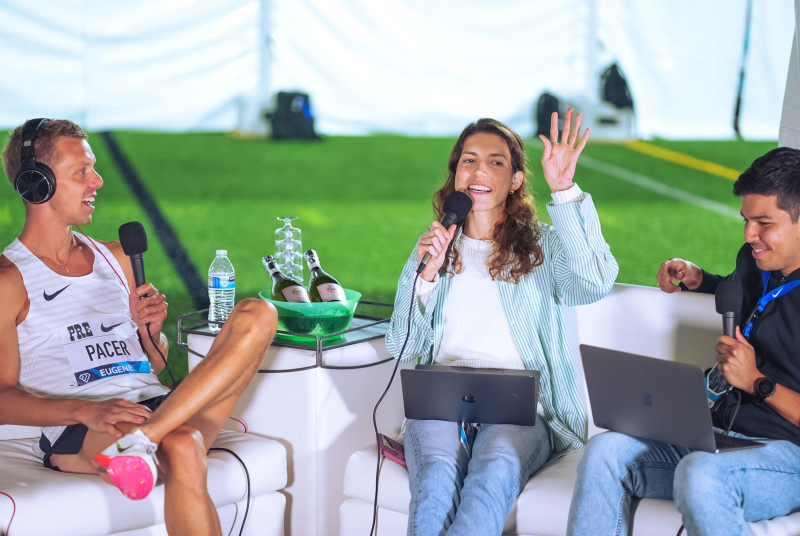 Dana Giordano says her podcast, More Than Running, started as a passion project while she was training as a professional middle-distance runner. Today, the Dartmouth track and cross-country alum has aired nearly 60 episodes featuring conversations with notable female athletes from Olympian Alexi Pappas ’12 to Roberta Gibb, the first woman to finish the Boston Marathon.  She’s also developed a small but devoted following on TikTok, where she dispenses running advice and offers behind the scenes commentary on major track and field events. The psychology major no longer runs professionally, but she still spends a lot of time at the track, interviewing athletes. DAM recently caught up with Giordano to learn more about her career.

When did you start running?
In high school. I was a gangly kid and a midfielder in soccer, which gave me some running experience when I was younger. Before my freshman year of high school, I had a five-and-a-half pound ovarian teratoma that had to be removed, so I started the year unable to carry more than 10 pounds because I was recovering from surgery. I was benched for the fall soccer season, and that winter I joined the track team. It just came to me naturally. I felt like I could be my whole self while individually contributing to a team goal.

Did you know you wanted to run professionally after college?
Not exactly. I thought the type of people who went pro were more like Abbey (D’Agostino) Cooper ’14 —she won 7 NCAA championships and almost made the Olympics while in college. In contrast, the best I placed at NCAAs was third in the 1500 my senior year.

After I graduated, I started a marketing job at Reebok. There was a track around the main office, and I kept training. In 2018, I ended up making the finals in [the U.S. Track & Field Championships] in the 1500 meters, and I was the only person in the field who wasn’t a professional runner. I looked around and thought, “I’m good enough to do this.” I ended up signing a pro contract to run with the Boston Athletic Association’s Adidas team 18 months before the Olympic Trials. I qualified for the trials, but the six months leading up to them my foot was injured, so I didn’t get that Olympic dream. I ended up leaving the team after that—I needed a break and reset.

How did you develop More Than Running?
The first year I was running professionally, my friend Chris Chavez, founder of Citius Mag, sent me a microphone and was like, “You should start a podcast.” That microphone sat in a box for three months. Then in January 2020, I took it to an altitude training camp in Flagstaff, Arizona, and recorded my first episode.

I felt, as a woman track athlete, that a lot of the interviews in that space were very similar, like the host just did a deep-dive on someone’s Instagram. If people are actually fans of the sport, they're not learning anything new about the athletes. Track athletes in general are very protective and guarded about their training, because it's an extremely cutthroat sport with not a lot of funding. So why would they be so intimate about their own story? I felt like I could create a safe space for my competitors to open up and share something that they felt passionate about — like being a first-generation college student, or balancing motherhood and coaching.

What has your summer looked like, with Worlds and all the qualifying meets at the University of Oregon?
I went back to Eugene three times this year. At the Prefontaine Classic, which was the first big international meet at Hayward Field, Chris and I had an open couch and the athletes could come talk to us right after their races. We tried to create a unique interview experience because we’re friends with the athletes. Then I was there in June with a larger Citius team covering the U.S. Track and Field Outdoor Championships. For the World Championships in July, there was a live show in between the morning and evening sessions led by John Anderson from ESPN, and I went on for events I know well, like women’s distance highlights. And then we invited specific athletes to the Citius house [in Eugene], for a live-streaming podcast in our backyard—like the ESPN desk. But definitely not the same budget as ESPN.

What have you learned from using TikTok?
It started out as a fun thing to do when I was running professionally and had a lot of downtime, because you can’t work out all day. During the pandemic, I saw it as a space to share my running knowledge with others. I want to open up the door for others to use running as a way to make their lives better, and more fun and active. It’s my favorite platform to create for because it's a space that values authenticity, and it helps people. The other day, I made a video where I was very raw about a run that felt pretty bad, and I got hundreds of comments from people saying, “This is exactly how I’ve been feeling, thank you so much for sharing.”  Another guy told me that he found my videos during the pandemic, and they got him back into running. He’s done two or three marathons since then.

Do you still run?
When you cover track and you make a podcast about track, unfortunately it doesn't leave a lot of weekends open for your own personal racing. But this summer I ran the Falmouth Road Race in Cape Cod, and I’m targeting a few more road races this fall. So yes, I still run. I moved to San Francisco this year and especially enjoy running here.

What’s next?
Bringing More Than Running and my online community together for in-person events. I’m producing a podcast for New Balance about a group of its international women runners. So it’s starting to feel like I’m creating my own space within the running media world. My ultimate goal would be having a show at the Paris Olympics in 2024—my dream growing up was always to be like Mary Carillo on NBC.