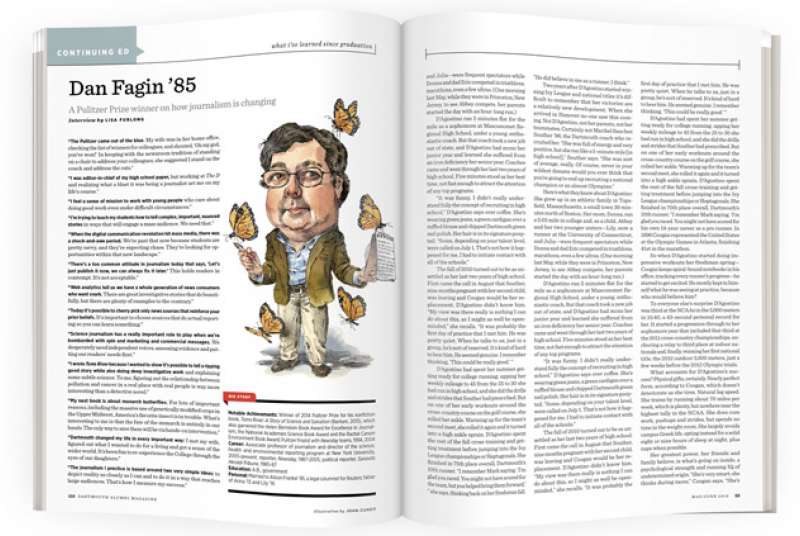 Personal: Married to Alison Frankel ’85, a legal columnist for Reuters; father of Anna ’13 and Lily ’16

“The Pulitzer came out of the blue. My wife was in her home office, checking the list of winners for colleagues, and shouted, ‘Oh my god, you’ve won!’ In keeping with the newsroom tradition of standing on a chair to address your colleagues, she suggested I stand on the couch and address the cats.”

“I was editor-in-chief of my high school paper, but working at The D and realizing what a blast it was being a journalist set me on my life’s course.”

“I feel a sense of mission to work with young people who care about doing good work even under difficult circumstances.”

“I’m trying to teach my students how to tell complex, important, nuanced stories in ways that will engage a mass audience. We need that.”

“When the digital communication revolution hit mass media, there was a shock-and-awe period. We’re past that now because students are pretty savvy, and they’re expecting chaos. They’re looking for opportunities within that new landscape.”

“There’s a too common attitude in journalism today that says, ‘Let’s just publish it now, we can always fix it later.’ This holds readers in contempt. It’s not acceptable.”

“Web analytics tell us we have a whole generation of news consumers who want snark. There are great investigative stories that do beautifully, but there are plenty of examples to the contrary.”

“Today it’s possible to cherry pick only news sources that reinforce your prior beliefs. It’s important to choose sources that do actual reporting so you can learn something.”

“Science journalism has a really important role to play when we’re bombarded with spin and marketing and commercial messages. We desperately need independent voices, assessing evidence and putting our readers’ needs first.”

“I wrote Toms River because I wanted to show it’s possible to tell a ripping good story while also doing deep investigative work and explaining some subtle science. To me, figuring out the relationship between pollution and cancer in a real place with real people is way more interesting than a detective novel.”

“My next book is about monarch butterflies. For lots of important reasons, including the massive use of genetically modified crops in the Upper Midwest, America’s favorite insect is in trouble. What’s interesting to me is that the fate of the monarch is entirely in our hands. The only way to save them will be via hands-on intervention.”

“Dartmouth changed my life in every important way: I met my wife, figured out what I wanted to do for a living and got a sense of the wider world. It’s been fun to re-experience the College through the eyes of our daughters.”

“The journalism I practice is based around two very simple ideas: to depict reality as closely as I can and to do it in a way that reaches large audiences. That’s how I measure my success.”