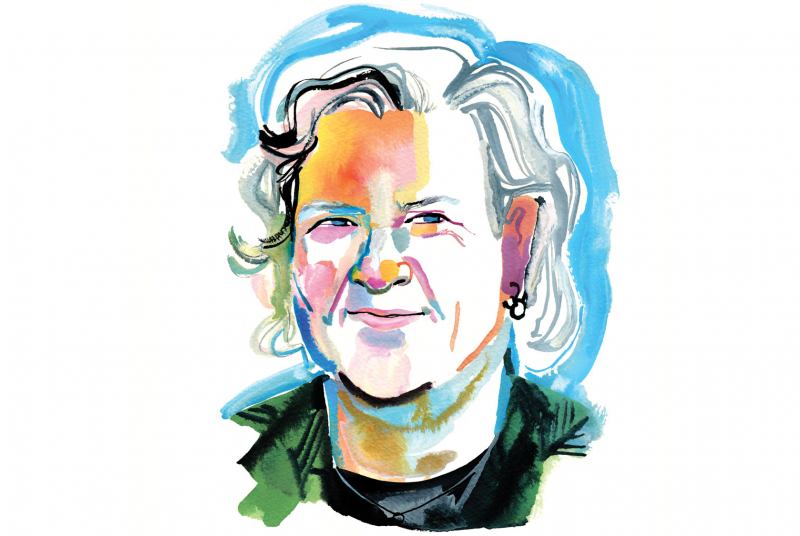 “A Failure to Dig Deeper”

Carol Muller has spent much of her career in higher ed advocating for gender equity on college campuses. She is executive director of Stanford WISE Ventures, which seeks “equity in science, engineering, and mathematics…across the Stanford community,” according to its website. As associate dean at the Thayer School of Engineering in the 1990s, Muller cofounded the Dartmouth Women in Science Project and the Dartmouth Project for Teaching Engineering Problem-Solving. In 1997, Muller founded MentorNet, an online network that connects students with engineering and science professionals. A former philosophy major, she’s a member of Dartmouth Community Against Gender Harassment & Sexual Violence, which has been critical of the College’s defense actions in the recently settled sexual abuse lawsuit filed by seven women in 2018 (two more plaintiffs joined the lawsuit in 2019). Here Muller offers insight into the College’s sometimes difficult relationship with women.

You arrived on campus in 1973, one year after Dartmouth went coed. What was it like?
Dartmouth is great at greeting people and enveloping them in the culture of the place. Around the edges, even early on, there were a few odd comments where you could tell that not everybody was on board with coeducation, which was nothing I had anticipated or experienced before. I just thought, “Oh, now they’re coed, I can definitely go.” Honestly, I had not really given a lot of thought to how that weird ratio of men to women might play out.

And how did it play out?
I don’t have any brutal memories. I remember the rating cards in Thayer dining hall and the feeling when you went to fraternities that this is male-dominated space and you’re there at their invitation, and you’re conforming to their expectations, and if not, you better leave. It was nice to be invited to parties and out on dates and to football games—it was very 1950s-ish in a weird way. Sometimes guys got drunk and obnoxious or handsy or whatever.

How aware were you of sexism at the time?
I was not aware until much later of the male-domination of the real estate, because it just was. So I wasn’t exactly critiquing it. My experience with the guys in my dorm—New Hamp—had been pretty great. I think it’s because those were the ones who were willing to stay when it was coed. A lot of those guys were and are friends. Actually, one of them [Al Henning ’77, Adv’79] became somebody I got romantically involved with and, 42 years later, we’ve been married all this time.

What was your reaction to the 2017 allegations of sexual misconduct against three professors in the department of psychological and brain sciences [PBS]?
Our son and daughter were undergrads at Dartmouth during the early 2000s, and so we visited campus frequently in those years. I knew from talking with one of the PBS faculty members at the time that gender and power dynamics were problematic in that department even then. I didn’t know how bad or when the kind of abuse that brought the lawsuit to a head got as bad as it was, but I think we’re talking about a culture that went unchecked for a long time. The problem was that people weren’t speaking up, likely because they feared retaliation or at least couldn’t see any upside to rocking the boat.

In 2019, Dartmouth demanded that three anonymous plaintiffs in the lawsuit reveal their identities.
To many of us, that just felt like typical and unconscionable “institutional betrayal,” which is Jennifer Freyd’s term. She’s a professor of psychology at the University of Oregon. She points out that it’s bad enough when someone experiences sexual harassment or some other trauma, but it’s only compounded when the institutional response to address that behavior is inadequate.

When have schools gotten it right?
Having been in higher ed for as long as I have, I’ve seen some interesting instances where leaders have taken bold and risky opportunities to acknowledge systemic failures. You saw it in 1999 when MIT biologist Nancy Hopkins went to the president of MIT and said, “Look, I gave data to the dean about how women, despite their equal accomplishments to the male faculty, are not being given the same lab space.” And [president] Chuck Vest, to his credit, said, “You’re right, we’re going to fix this.” He didn’t try to make up some story about why things were okay. He made lemonade out of lemons and got millions of dollars from foundations and others to engage peer universities to see how well they were treating their female faculty.

Any other examples?
Ten to 12 years ago a colleague and friend was getting an award from Harvard Business School. There was a big dinner in San Francisco with 150 female alums. The dean stood in front of them and apologized for the environment and behaviors the women had experienced as students there, dating back to 1963, when HBS first began admitting women. He hadn’t been dean at the time, so this isn’t about his personal failure, but he is the dean, so he apologized on behalf of the institution for things they shouldn’t have had to experience.

It goes a long way when someone admits something happened that was not right. It makes people feel as if the institution isn’t going to betray them by continuing to ignore a history that isn’t great.

Is there something about Dartmouth that makes it harder for the school to do this?
Dartmouth could do these things more easily than other schools. It is pretty autonomous and self-contained. It’s not part of a big university system with layers of bureaucracy. It’s not without financial resources. The College wants to do the best it can with undergraduate education and be a small, reasonably top-notch research university. But I think being willing to own the past is part of that, to be open to some of that critique. Not paying attention to history is often more of an oversight than intentional. Many inequities experienced through the years by faculty, students, and staff would be judged illegal, even criminal, today, though in the culture and context of the times in which they occurred there was little institutional support for addressing them in a way that recognized the harm to the lives, ambitions, and academic and emotional development of impacted individuals.

How can the school better reconcile its past, present, and future?
When you look at the history, President John Kemeny skillfully navigated a complex system toward a decision for coeducation in 1972 that, if it had gone the other way, would have left Dartmouth in the backwoods forever. I don’t think Dartmouth would have anywhere near the stature it does in the world of higher ed today had it not made that decision to go coeducational.

I don’t think Dartmouth has had a particularly feminist president who really understands what equity and equality mean and is thoughtful about it. Someone with personal experience. I don’t know the presidents well, and maybe it’s not a fair thing to say about Jim Wright and Phil Hanlon ’77. But how are decisions made? I think we have to look at that.

What’s your take on Dartmouth’s Campus Climate and Culture Initiative (C3I), focused on creating a learning environment free from sexual harassment and the abuse of power?
It was very noticeable that there was no focus on alumni, yet alumni clearly drive institutional priorities—donors, engagement through alumni relations, not to mention all the members of the board of trustees. Why wouldn’t we also try to educate and engage alumni on these issues?

A little over a year ago I went to a 250th Dartmouth celebration in San Mateo, California. The chair of the board, Laurel Richie ’81, who’s wonderful, gave a lovely talk. She said something along the lines of, “I’m sure all the women in the audience will join me in our appreciation for John Kemeny for making Dartmouth coed.” My immediate reaction was, “Wait a second, the women in the audience? Like the men in the audience aren’t grateful for coeducation? How is this coeducation if we’re still being asked to be grateful for being included? Ahhh!”

Did you ask her about it?
I went up to her after the reception and told her my reaction. To her credit, she looked at me and said something to the effect of, “You’re right. You wouldn’t believe how many different people reviewed that speech.” That’s exactly the kind of internalized, cultural gender differences that I feel we need to get to the root of when we talk about what needs to shift in the culture. Can’t we ask ourselves: What presumptions are we making through our language, actions, policies, and public statements that reinforce this sense, because men were there first, that today they still somehow deserve more privilege?

So what can the College do differently?
I hesitate to say specifically, because I don’t know what it has been doing. But as a concerned alum, I would have expected more of a response that considered organizational factors rather than just saying, “Oh, there were three bad actors—they somehow thrived and survived in this department for how many years—and then were persuaded to leave or retire, end of story.”

There was a failure to dig deeper to figure out what had contributed to that behavior and how long had it really been going on and who else may have been harmed by it. I haven’t heard anyone say, “You know, we realize we should have paid attention,” or “We changed some certain procedures or some oversight things,” and maybe that’s happened, but I think people should say it. For far too long in cases of sexual harassment there is a tendency to duck and cover and not really change anything. If you can’t learn from these terrible things that happen and the mistakes that were made, you’re going to get recurrences.

It’s complicated. I’m sure there are many lawyers saying, “Don’t say anything! You might leave yourself open to a lawsuit.” What academic leaders have to do is figure out how to communicate some reassurance that systemic failures are being addressed.

Abigail Jones serves on the DAM editorial board.

Annette Gordon-Reed ’81
“Growing Up with Juneteenth”
Historian writes about celebrating Juneteenth in Texas as a child.

Jamal Brown ’08
Personal/Political
The press secretary for Joe Biden’s presidential campaign talks about what motivates him.