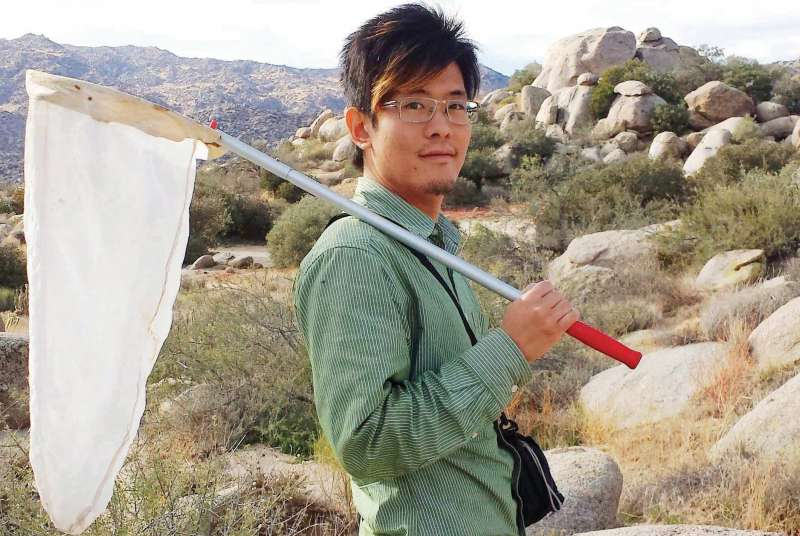 Photo by Susan Hung
Voices in the Wilderness

James Hung ’10 had unusual pets as a boy: grasshoppers, beetles, praying mantises. Every weekend his parents drove him to nearby fields and ponds to catch bugs. “They were very accommodating,” he says. “A whole corner of the basement was a kind of insect laboratory.” Now 30 and a postdoctoral researcher at Ohio State University, Hung has gone from amateur entomologist to recognized bee expert.

As a graduate student at UC San Diego, he assembled one of the largest collections of the region’s native bees—insects that hadn’t been well catalogued despite the area’s reputation for bee diversity. Along the way Hung discovered at least four new species and found that habitats in urban San Diego County areas had lost many bee species. He and other scientists are using this data to determine the impact of development and climate change on the local environment. “Putting together a story about how our actions are hurting or helping bees is very satisfying,” he says.

Hung also made a splash earlier this year when a leading biology journal published a study he spearheaded that showed honeybees are the world’s top pollinator, ahead of birds, wasps, and butterflies. He and his colleagues were the first to report that honeybees alone pollinate nearly 15 percent of all non-agricultural plants—species whose survival is essential for healthy ecosystems and thriving crops. “It’s not as if scientists didn’t know they were important,” he explains, “but we were able to put a quantitative number on how important they are on a global scale.”

Carefully pinned and stored in wooden or cardboard boxes, Hung’s bee collection contains 26,000-plus specimens from more than 450 species. Some are the familiar black-and-yellow, others are iridescent or dark red. Hung used an old-school method to capture most of them, venturing into California’s scrublands with a net and waiting patiently—sometimes for hours—to score his prey. David Holway, an ecology professor at UC San Diego and Hung’s graduate advisor, was impressed by Hung’s search for rare bees in the Colorado Desert last summer, when temperatures hit 110 degrees. “It’s hard to put into words how talented he is,” says Holway. “He’s an exceptional scientist.”

Hung, who was born in Taiwan and moved to Vancouver at 10, developed his interest in bees as an undergrad. When Dartmouth biology professor Douglas Bolger collected insects from traps in San Diego, Hung sorted specimens from that group as his senior honors thesis, and he went further, reaching out to experts at New York’s American Museum of Natural History to learn more. His recent side projects include designing a curriculum about pollinators for schoolchildren and giving lectures to local nature groups. “If we don’t do a good job protecting bees and other pollinators, the long-term consequence is that we’ll lose lots and lots of biodiversity,” says Hung. “I hope it’s a point we won’t even come close to approaching.”

Hung is now investigating how pesticides and other agricultural practices impact pollinators on Ohio’s pumpkin and squash farms. He hopes to become a full-time university professor. “Every person I enlighten and teach is one more person who will care more about the environment,” he says.