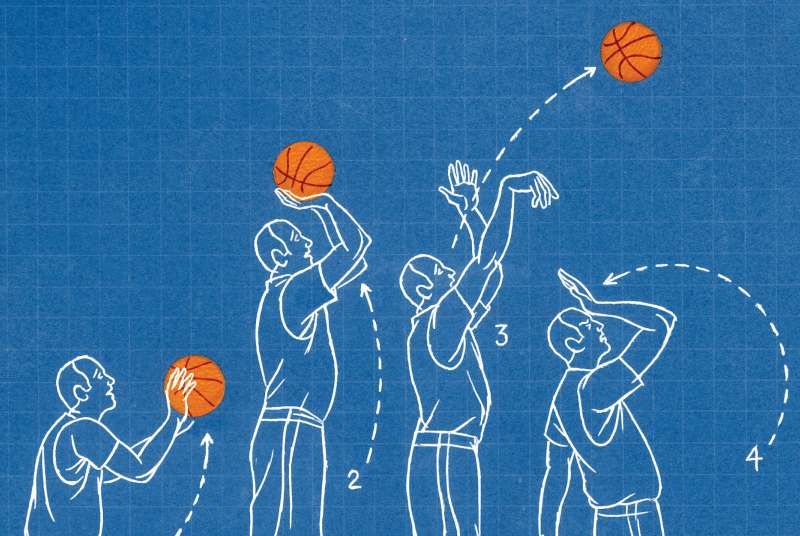 It was late in a game against Brown on January 31, 1998. The outcome had already been decided, otherwise Dartmouth guard Aaron “A.B.” Wilkinson ’01, a freshman walk-on with the basketball team, wouldn’t have been in the game. But coach David Faucher emptied the bench as time wound down, and Wilkinson got the ball near the basket, stutter-stepped and threw up a baby hook. He watched with pure delight as the ball bounced off the backboard—and dropped through the net.

Wilkinson likes to imagine he looked like NBA Hall of Famer Magic Johnson, gliding across the paint and arcing the ball off the glass. “Though I know in reality it was not nearly as graceful,” Wilkinson says with a laugh. “But it went in, and that’s all that mattered.”

Magic-like or not, graceful or not, give Wilkinson his moment. That was his one and only basket scored in his Division I basketball career, and that unique stat puts him in rare company. Dating to the 1992-93 season (the timespan for which such stats are available at the invaluable sports-reference.com), four Dartmouth players—Wilkinson, Tom McGinnis ’99 (1997-98), Doug Hayes ’08 (2004-05) and Blake Williams ’11 (2007-08)—scored one and only one career basket from the floor, and a fifth (Alex Wolf ’14, 2014-15) scored one—and only one—free throw.

At first glance that seems like an unfair exchange: A member of the Dartmouth basketball team commits to thousands of hours for practices, travel and games, and for what? To watch his teammates play? Anyone could do that by never joining the team and spending all that time on more important endeavors—or maybe even studying. But the benefits of being on the team go far beyond minutes played or points scored or the fleeting glory those two things bring. Regardless of how little time they spent on the court—and in fact, because that time was so little—the walk-ons learned about sacrifice, perseverance and being part of a team, all skills they now use daily in the real world.

Playing DI basketball, even as a benchwarmer, requires a player to have been at the very least a pretty good high school player and probably great. Back home, he was the best of the best. At Dartmouth so is everybody else, and players face a situation all Dartmouth students can relate to: the humbling reality of no longer being the best. Even more difficult than that, they have to figure out what to do with their lives after they stop playing.

It’s not that they expected to play basketball for the rest of their lives, it’s that they had played basketball their whole lives up to that point. “Yeah, you’re stepping away from sitting on the end of the bench. What’s the big deal there?” says Wilkinson, now an assistant professor of history at University of Nevada, Las Vegas. “But basketball had been so formative in those years of my life, it was really an identity I built myself around.”

The benefits of being on the team go far beyond minutes played or points scored.

Wilkinson, Hayes and Wolf all separately and unprompted describe a difficult transition period after giving up basketball before finding the careers they wanted to pursue. They say their time on the team proved invaluable in the successes that have followed. “That year, in terms of being on the basketball team and being around guys who were making me a better person and better player, it really couldn’t be topped,” says Hayes, who played in 10 games. “I got a lot of intrinsic value and lifelong lessons out of that short year, in part because I was lucky to meet a bunch of characters who were very impressive and constructive and almost formed a mentorship-type relationship with the younger guys.”

Today when Hayes, an investor and entrepreneur who is CEO of N.Y.C.-based Junto Health, sees his old teammates, they break into stories of those days almost immediately. Although Hayes can’t recall the details of his only basket, he can recount with clarity every inside joke the players shared, proof that relationships formed on the team last far beyond the final whistle. “That really gives me a sense of being a part of a family, even if I wasn’t at the table for very long,” he says.

Wolf’s basketball career was cut short by an injury after he made his one free throw (which caused his teammates to go  nuts on the sidelines) in a home victory against Maine on December 6, 2014. Even that was
a big accomplishment, considering Wolf had a fracture in his back. He had been
heavily recruited, but most schools backed away after he got hurt in a high school All-Star game. “I know in the future I’m going to have times when I’m going to go through a lot of adversity and have a lot of pressure,” says Wolf, who is pursuing a career in machine learning. “I’m going to need to fight through it. I know if you work hard and keep your head up, you’re going to be all right.”

The time since their playing days has given these one-shot wonders perspective. They look back on their college basketball careers with a mixture of pride and self-deprecation. Hayes laughs out loud when asked to be interviewed, and he passes along thanks from his brother for future teasing material. Yes, one basket is meager. But it’s one more basket than 99 percent of their classmates score.

“I accomplished my dream,” Wilkinson says. “I played DI basketball.”

Matt Crossman is a freelance writer based in St. Louis, Missouri.