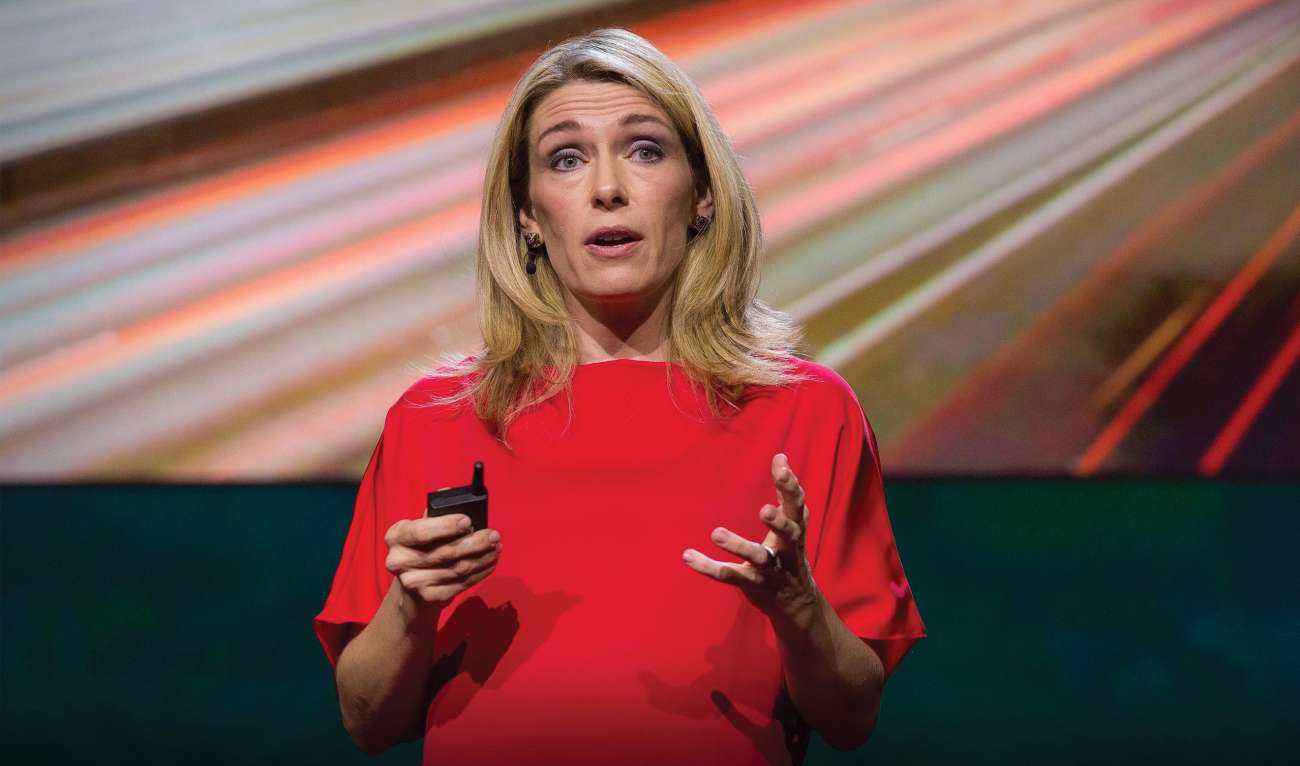 Sometime between freshman and sophomore years, as Abigail Marsh was driving home from her summer retail gig in Tacoma, Washington, a dog darted in front of her. She swerved to avoid it, hit the animal anyway and ended up on the wrong side of the highway. Stuck on an overpass. Facing oncoming traffic. With a dead engine.

“It was very obvious how quickly I would be killed or mangled,” Marsh says.

Help came in the guise of an Idris Elba lookalike, who, upon seeing Marsh’s peril, parked his car, ran across four lanes of traffic, got her car started and escorted her to safety. And just like that, he was gone. Marsh never even learned his name.

The accident was both traumatic and surreal. It also launched Marsh on her life’s work. The stranger’s willingness to risk life and limb to rescue someone he’d never met haunted her. “It’s one of those puzzles that kind of gnaws at you,” says Marsh, who earned a Ph.D. in social psychology from Harvard University in 2004. “I couldn’t fathom why somebody would’ve made that decision to risk his life to help me—and then disappear again. It seemed so improbable.”

Marsh, 41, is now an associate professor in psychology and the interdisciplinary program in neuroscience at Georgetown. She’s spent a good chunk of her career studying the brains of “extreme altruists” who risk everything for complete strangers—specifically, dozens of kidney donors. Conversely, she has also spent time researching the brains of psychopaths who, it is safe to say, would never consider risking anything for another human being.

She’s consumed by the drive to understand the altruistic urge. Are we hard-wired to be kind? What keeps most of us from hurting others? Why do some people have more compassion than others?

“I’m a basic scientist at heart. I want to understand why we have the capacity to care for people,” says Marsh, who explores the extremes of human behavior in her new book, The Fear Factor: How One Emotion Connects Altruists, Psychopaths, & Everyone In-Between (Basic/Hachette). Her main finding: The key to compassion is located in the brain’s amygdala, an almond-shaped bit of gray matter lodged inside the hippocampus. The amygdala processes emotions and, in particular, fear. By scanning the brains of both altruists and psychopaths, Marsh found that altruists’ amygdalae are larger than other people’s, while psychopathic people tend to have smaller than average amygdalae.

In short: Altruists are better at recognizing fear and distress in other people—and responding to it. Call it the “anti-psychopathic brain.” Meanwhile, psychopaths don’t feel concern for others and generally aren’t able to recognize emotional upset in others. “I don’t believe every human has the capacity for goodness,” Marsh says. “But most do. And that capacity for goodness in humans is deeper than any one religion.”

As she’s pursued the study of goodness, Marsh has earned acclaim. There’s last year’s well-received TED talk, “Are We Wired to Be Altruistic?” She won the 2007 Wyatt Memorial Award for translational research from the National Institute of Mental Health and the 2014 Cozzarelli Prize for scientific excellence and originality from the Proceedings of the National Academy of Sciences. Her work with kids has been used to demonstrate the different neural mechanisms that can lead to behavioral problems in children and why a one-size treatment approach doesn’t fit all. Her research has been funded by the National Institutes of Health and the John Templeton Foundation. Last year Marsh was named a 2016 fellow in the Society for Personality and Social Psychology, the largest organization of social psychologists and personality psychologists.

The professor hopes that her research with kidney donors will affect how people understand altruists—and make it easier for potential altruists to donate too. “Donors are so often viewed with skepticism and called crazy, and I think my work helps provide an alternate explanation for their decisions,” she says.

“What she’s doing is magnificent,” says Angela Cuozzo, one of the altruistic kidney donors Marsh has studied through the years. “She’s truly advocating for our cause and what we do. There’s not a lot of studies done on us, in terms of why we donate. We certainly don’t know ourselves. We can’t answer that question.”

“I don’t believe every human has the capacity for goodness,” Marsh says. “But most do.”

Deep in the belly of Georgetown University Hospital, Marsh stares into a giant computer screen. To be specific, she is staring at a 3-D image of the brain of her assistant, who is on the other side of the wall, burrowed in the tubular recesses of an MRI machine. “She’s got lots of brain packed in there,” Marsh says, approvingly.

Her assistant’s head is encased in a birdcage-like device, which collects brain signals and allows Marsh to measure blood flow and brain change. The assistant is shown a series of photos of people looking fearful or angry or bemused. Some of the pictures flash by so quickly, it’s hard to know what you’ve seen, Marsh says, but the amygdala will still respond, recruiting more blood in response to witnessing fear.

Academics is encoded in Marsh’s makeup. She’s the seventh professor in the family. Her great-uncle taught at Thayer, and her grandfather taught metallurgy at Columbia University’s engineering school. But her dad is an M.D., an infectious disease specialist who worked with AIDS patients, and Marsh assumed that she’d follow him into medicine. Her childhood experiences of following her dad around on his hospital rounds made an impression.

She started out on the premed track at Dartmouth, but biology class during freshman year failed to inspire. What did inspire was Psych 1. In particular, a passage—buried deep in her intro to psych text on page 371—that first made Marsh think, “Hey, maybe I could do this for a living.” The passage was about teaching language to apes, and though Marsh strictly studies humans, she keeps that passage earmarked with a pink Post-it to remind herself of what got her started.

She’d always thought of science as biology and abstract particles. The idea that you could study messy, complicated humans as a scientist got her hooked. Her undergrad thesis on facial expressions and how the brain processes the witnessing of others’ emotions remains the basis of her work today.

Marsh’s fascination with the vagaries of human behavior was further fueled by her acting on stage at the Hopkins Center. She has vivid memories of running into Mikhail Baryshnikov backstage. He was performing in Moore Theater and she was in costume as an old crone for a production downstairs in the Bentley. It was not, she says with a laugh, the best way to make an impression.

As a psychology major, she eventually gave up acting for academics—it seemed a more reliable path to earn a living—but drama was good preparation for a psychology career, she says. After Dartmouth and her Ph.D., Marsh conducted postdoctoral research at the National Institute of Mental Health until 2008.

At first, Marsh thought about studying heroic rescuers such as her highway Samaritan. But heroic saviors proved difficult to recruit—they’re not exactly bonding
over their exploits on listservs. And scientifically speaking, heroic rescuers tend to skew young and male—and  physically fit enough to rescue someone from catastrophe on a high-speed freeway. Then, sometime around 2010, Marsh turned her attention to altruistic kidney donors, people who’ve donated to someone they’ve never met. Fewer than 2,000 of them exist in the country.

Like heroic rescuers, altruistic kidney donors take on significant risks—as well as costs—to save a stranger’s life. But they represent a wider swath of humanity: They can be old or young, female or male. All that’s required to donate is good health and a pair of functioning kidneys. And they were easier to locate through transplant organizations and donor listservs. Because kidney donors have to go through a battery of tests and screening to donate—tests that can take months at a time—they have to be highly motivated to save lives.

The more Marsh read up on living kidney donation, the more she became sure that this should be her focus. Kidney disease is the ninth largest cause of death in the United States. The waiting list for a kidney transplant has more than 95,000 people on it. Most wait three to five years before a suitable match is found. “The waiting list could be eliminated if just a fraction of a percent more people decided to donate,” Marsh says.

Altruistic donors tend to be female rather than male, middle-aged rather than young, and white rather than black or brown. (The racial makeup of altruists is beginning to change, she says.) They hate to be fawned over, Marsh says, and they don’t think of themselves as special. Humility is one of their distinguishing features. Most don’t describe themselves as being particularly religious, she says.

Take Harold Mintz, who donated his kidney in 2000 to a stranger, because, he says, it was the right thing to do. Certain life experiences, such as the death of his dad from an incurable disease, primed him to help. He buys Marsh’s research but bristles at the notion that he is anything unusual.

When Marsh first scanned his brain in 2011, Mintz says, “I kept telling her, ‘I’ll save you time and money. I’ll tell you the results. You’re going to find out that my brain and your brain are the same.’ ” That turned out not to be true: Mintz learned that his amygdala is indeed larger. Still, he’s not convinced. “Of course my amygdala is bigger,” he says. When you exercise a muscle, it grows bigger. “Because I gave a kidney doesn’t mean that I’m nicer than anybody else. I don’t want to be the unusual guy. I want to be normal. Normal people can do good things.”

To understand the human capacity for empathy, Marsh first wanted to study those who don’t have that capacity: children and adolescents with a history of conduct problems and very limited empathy. One subject, a 14-year-old girl who bragged about killing her guinea pig and had already learned to seduce men to get what she wanted, was incapable of understanding the havoc she wreaked, according to Marsh. The human tendency is to treat psychopaths as examples of moral failings, she says. “But I would never call a child or adolescent evil. I don’t think anyone would have chosen to be born lacking compassion and engaging in those behaviors,” Marsh says. “I fully believe it’s a mental illness. It’s not that anyone wants to be born that way.”

For her next research project, Marsh is returning to the deep recesses of the MRI machine. The project is in the early stages, so she’d rather not talk details. Suffice it to say, Marsh will be delving further into the complexities of the amygdala, the better to understand what makes kind people kind.

And yes, she’s scanned her own brain with an MRI machine. She’ll be the first to tell you that her amygdala is nothing special. “I’m soft-hearted, but I’m not as altruistic as the people I study,” Marsh says with a laugh. “But I’m quite confident that I’m not psychopathic.”

Teresa Wiltz is an award-winning journalist who lives in Washington, D.C.

You May Also Like
Cell Power
On the frontiers of biomedicine with professor Rahul Sarpeshkar
Is Your Brain to Blame?
Cognitive neuroscientist Michael Gazzaniga ’61 explores the mystery of free will vs. determinism.