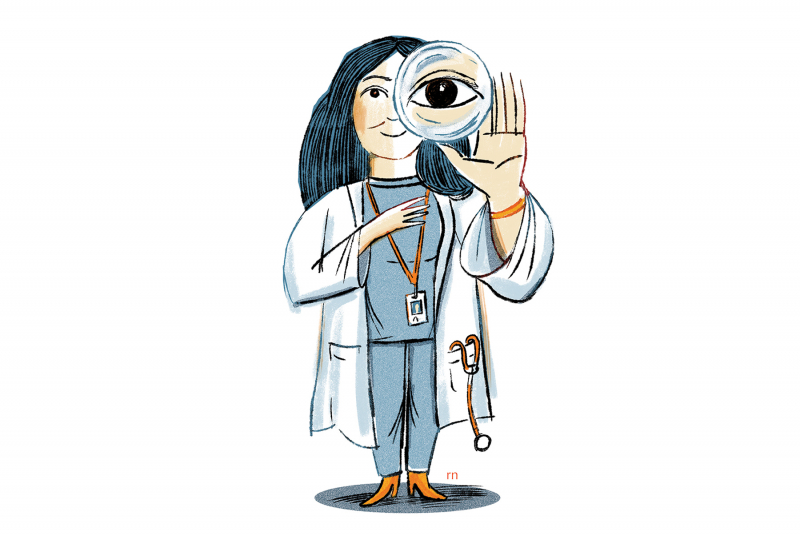 Henderson’s first time performing cataract surgery was harrowing. “It was traumatic,” she says. “It was a grueling, white-knuckle experience. I was so exhausted I had to take a nap after I got home.” Years later, in 2005, she invented an aid for surgeons-in-training: a cognitive virtual-reality simulator. Today it is used worldwide as a way to teach cataract surgery.

Since then Henderson’s career has been a whirlwind of publications, honors, and more inventions. When she’s not in the OR, she teaches at Tufts University School of Medicine. She and husband Ted Henderson ’89 have three children, all with Dartmouth ties (one alum, two students).

Now the biology major is focused on an invention to help aging patients. Cataract surgery is on the rise, she says, with people in their 70s and 80s playing sports. “It’s common to see people in their 90s living independently and tied to their communities through email and cell phones,” says Henderson, past president of the American Society of Cataract and Refractive Surgery.

But science hasn’t kept up, says Henderson, and the artificial lenses available to replace clouded lenses—the cataracts—could be better. She teamed up with Liane Clamen, who had secured a patent for a new type of lens in 2019 and needed help finetuning the science and getting the lens to market. What makes it different is a new flexible  polymer that allows the lens to more closely mimic nature.

“I thought of all the brilliant people I knew in ophthalmology and of course I thought of Bonnie,” says Clamen. The two met decades ago at Massachusetts Eye and Ear, where Henderson was an attending physician and Clamen a resident. “She understands the science of what works,” says Clamen, CEO and founder of Adaptilens, where Henderson is chair of the scientific advisory board. They are talking to investors now and hope to develop a prototype this year.