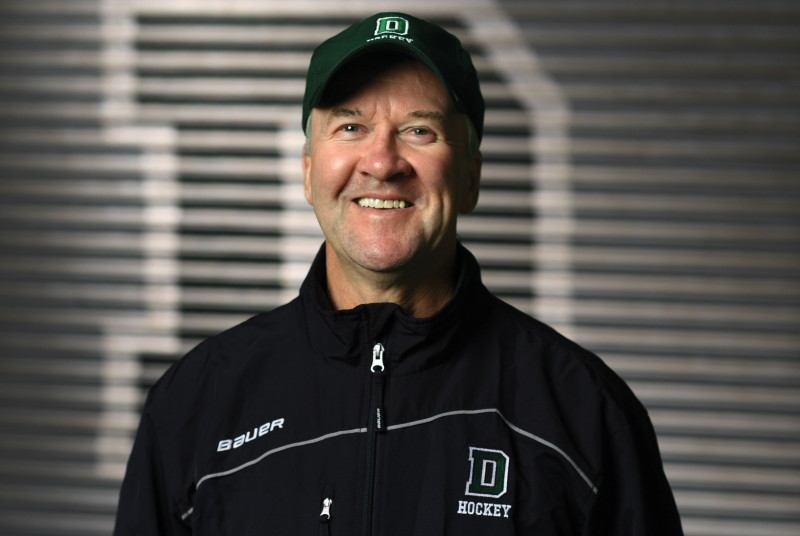 It’s been awhile, but Bob Gaudet ’81 remembers well the first NCAA men’s hockey game he coached. It was 1988—more than 1,000 games ago for the former Big Green goalie—when he led the Brown Bears over his alma mater in a one-goal victory at Thompson Arena. “It was bittersweet,” Gaudet says. “I was representing the enemy.” That changed when he took over the Dartmouth squad in 1997. He is one of only seven coaches to hit the 1,000-game mark while coaching in one conference, and he is the first to do so in the Eastern College Athletic Conference, which begins postseason play on March 6.

DAM asked the man of milestones to recall three of his most memorable games from his 23 years of coaching. “There have been so many memorable games over the years that it’s hard for me to pick a few,” he says. Here are three tilts he’ll never forget.

“A classic was definitely the Dartmouth-UNH game at the Verizon Wireless Arena in Manchester in the 2004-05 season. As I recall, we trailed 8-5 with less than 10 minutes remaining in the game and came back to win 9-8 in regulation on a great goal by Nick Johnson ’08 with an assist from Lee Stempniak ’05 in the waning minutes of the game.”

“Another memorable game was a home win in front of a packed Thompson Arena against St. Lawrence in the final regular-season game of 2005-06 to win the ECAC season championship. This was extra meaningful as the game capped off our centennial men’s hockey celebration of Dartmouth’s first team, which competed in 1905-06.”

“Another fond memory was beating Colgate in the third and deciding game of a home playoff series in 2015-16. Tim O’Brien ’16 scored in double overtime to win the game, which sent us off to face archrival and nationally ranked Yale in New Haven. We swept Yale in two straight games on the strength of a Connor Yau ’19 overtime winner in the first game and an incredible performance by goalie Chuck Grant ’16 in the second and deciding game.”